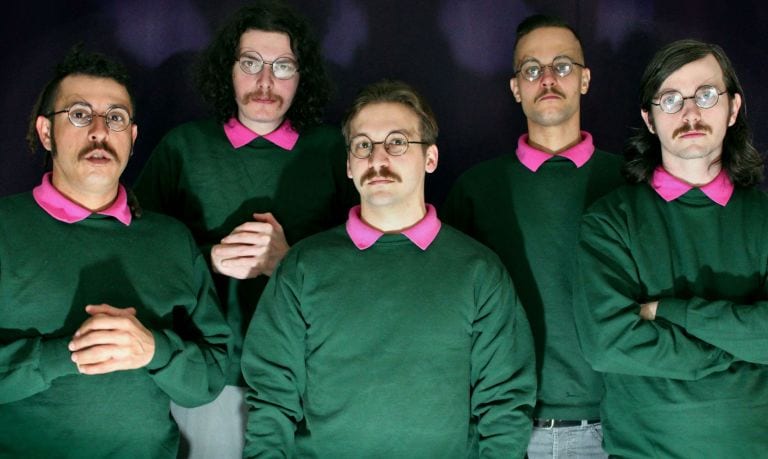 When you think of hit television show The Simpsons and think what characters from the show would best fit into a death metal band you would probably instantly think of Nelson or Otto, or perhaps even Bart if he turned into a teenage tearaway. The one character that you probably wouldn’t think would ever front an extreme band would be Ned Flanders. Yet in a way he does, yes out there in the world is a Ned Flanders inspired metal named Okilly Dokilly who play their own style of metal called Nedal and they are about to hit Australian shores for the first time.

“It started out with my original drummer and I really just joking around and trying to come up with the absolute worst name in the world for a death metal band,” says the band’s lead singer Head Ned when I ask him where the idea came from for a Ned Flanders inspired metal band. “A band that walks out on stage with pyrotechnics and smoke and all this stuff and then are like ‘Hi, we’re The Sunny Days or hi, we’re Rainbow Friends.’ One of the things we came up with was ‘Hi, we’re Okilly Dokilly’ and then from there we were like what if the lead singer was dressed like Ned Flanders and then it was ‘hey, what if they are all dressed like Ned Flanders?’”

“Then when we realised that we could spell the band name with the word kill in it twice and could use the word nedal as our genre it just felt like all this fate coming together for us to form the band,” he continues. “We thought we play a show or two at a bar and have a good laugh over it, but when we put pictures and stuff on the internet it started to go a little further than that, further than we ever thought it would.”

From there we start to talk about The Simpsons more in depth and I ask Head Ned if he was a huge Simpsons fan before this. “The Simpsons was definitely one of my favourite shows,” he says with a laugh. “Any Matt Groening show was huge for me. I was a big Futurama fan and The Simpsons at that time I could pretty safely say that I had seen every episode up to Season 15 and I owned a few copies and what not. It has hard for me to say thought that I was a huge Simpsons fan though because since we started this band I’ve met a lot of people that I would call huge Simpsons fans and I could never be on their level as far as familiarity with the show… but it was definitely something that I was very in to.”

“Oh man, it is definitely really exciting,” he says with excitement in his voice when we begin to talk about Okilly Dokilly coming to Australia. “We’ve had so much fun touring over in the UK and we are going to be going to Europe in a few weeks. Just being able to see the global impact of The Simpsons and being able to go from place to place and getting to meet people is cool. But yeah with Australia the big thing is the opener Dr. Colossus, they are from Australia and they popped up on our radar and we are really stoked to be able to play some shows with those guys because they are the only other Simpsons metal band on the planet and being able to connect to that has been cool.”

“I’ve been asking people how much I should reference the Bart vs Australia episode,” he says laughing as he continues. “The consensus has been a lot. I think the currency at our merch desk is going to be dollary-a-roos and I’m trying to fashion a giant boot to walk out on stage in and all that. But yeah we are really excited about that… and I am sure that we will see a giant spider or two.”

To finish up though Head Ned has some advice for all of the Okilly Dokilly Aussie fans. “Just get ready for some knifey-spooney and the one thing we are looking forward to are the circle pits because we have been told that they swirl clockwise… or counter-clockwise… I’m not sure which way it is, but the opposite to the US and we’re looking forward to celebrating The Simpsons and bringing some heavy metal Down Under.”