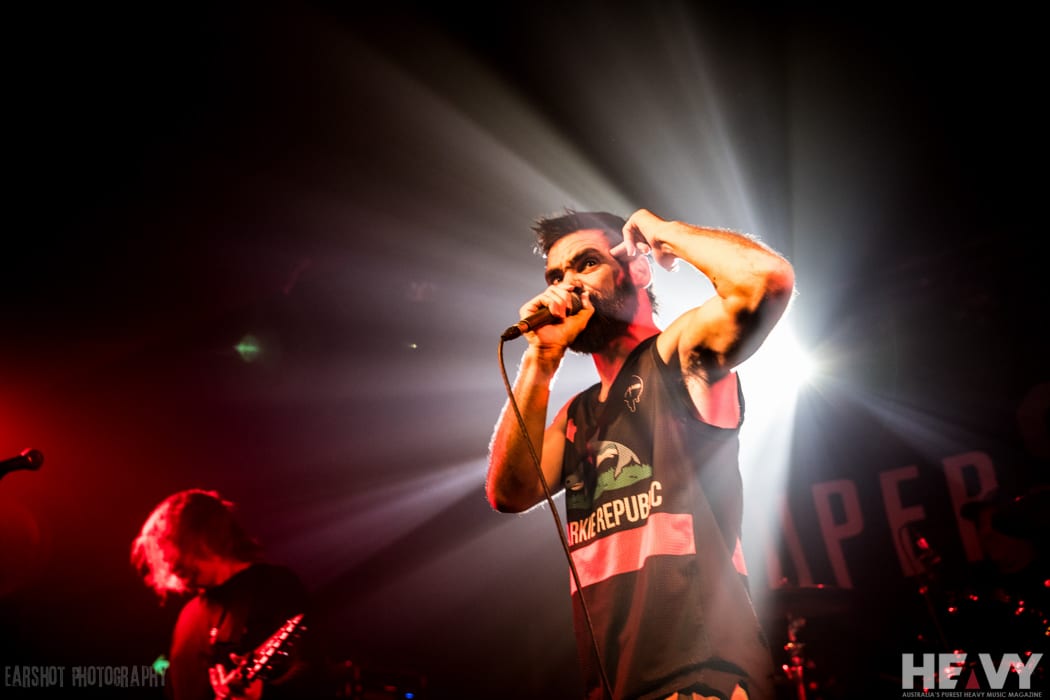 With a mammoth five-band line-up, Heistfest made its Brisbane debut on Friday night at the Back Room in Annerly, with headliners 36 Crazyfists joined by Superheist, From Crisis To Collapse, Massic and Adriatic.
On paper even it was a brutal collection of music, with no room for respite amongst the handful of acts on display.
Adriatic were first out of the blocks, blasting headlong into ‘Immerse’ from the intro, with vocalist Ctroh Sharks setting the tone for the night with an energetic display of musical aggression that had the crowd threatening to shake the front barrier from its foundations before the set was ten minutes old.

Adriatic have been decimating the Brisbane music scene for more than a decade and showed every ounce of that experience in an unfortunately too short set.

Ctroh taunted the crowd from the first song, urging them to “scream and give it all you’ve got” and the band led by example, giving no quarter and accepting no defence. The boys promised a full-length album sometime this year and I know I for one will be eagerly awaiting its arrival.

The second local band of the night, Massic, drew a rapturous cheer from the growing crowd before leaving no doubt as to their intent with set opener ‘Harangue’ before the frenetic ferocity of ‘Perpetual’ and ‘Defeated’ almost drowned out the enthusiastic cries of anarchistic intent from the assembled masses.

Vocalist Simon Russell-White put off knee surgery in order to perform tonight, not that you could tell by the way he launched repeatedly between the stage and the barrier, singing at and to the crowd in a performance that at times reminded me of Henry Rollins in terms of intensity and charisma.

Massic are the type of band that grabs you by the throat before doing you the courtesy of introduction and as they ripped through closers ‘The Herder’ and ‘Torched Order’ not only served notice to the Australian metal community that they intend to live up to their name but also left an indelible mark on the crowd large crowd that did justice to the current support music fans are giving to a revitalised scene.

Byron Bay metallers From Crisis To Collapse wasted no time in reigniting the intensity as they tore onto stage, with vocalist Angus Carter and guitarist Chad Ellis undergoing a musical transformation from quietly spoken gentlemen to possessed musical demons from the moment the first note of ‘Log’ was struck.

Bouncing, kicking, and sometimes almost crawling around the stage, Angus growled and screamed his way through a six-song set that featured three songs – ‘Crisis’, ‘Turning The Gun’ and ‘Slow Burn’ – from recently released E.P The Seventh Tree.

If it were possible, From Crisis To Collapse upped the heaviness even more with a captivatingly frenetic performance that proved our local bands are more than capable of matching international counterparts.
The band was tight and aggressive, perfectly in sync with one another’s ferocity and fed off the crowds energy in a display of organised chaos that will long live in the minds of those fortunate enough to bear witness.
Heistfest organisers, Superheist, need no introduction, with founder and sole surviving original member DW Norton assembling a talented group of musicians for the bands second coming.

Frontman Ezekiel Ox is perhaps one of the countries better known and divisive vocalists, wearing his heart and his mouth proudly on his sleeve and never missing an opportunity to unite (or sometimes oppose) the masses with his opinionated monologues and well-spoken verse. His talent is undeniable and his presence never fails to generate passion and excitement, not that you could imagine him caring either way.

He owned the close to capacity crowd from the first time he spoke into the microphone (in a jovial mood despite watching the Bombers outlast his beloved Melbourne mere moments earlier), and from the moment he instructed the crowd to “make some fucken noise” – which they dutifully did – you could sense he held each person’s destiny in the palm of his hands.

Superheist exploded onto the stage with ‘Hands Up High’, the adoring crowd singing each word back to Ox as he stared them down one by one.

Music is as much about performance as it is content, and Superheist are the masters of precision with an infectiously energetic live show that is as entertaining as it is exhausting.

Drummer John Sankey reaffirmed his reputation as the international man of metal with a pounding display of controlled aggression, matched only by its prowess and precision.

Guitarist Keir Gotcher paced the length and width of the stage, eyes obscured by sunglasses, but he still managed somehow to connect with punters on a musical level despite lack of discernable eye contact.

Simon Durrant, the second longest serving member of the band, is the immovable rock from which the band’s music rumbles, while DW attacks his guitar with the ferocity of a jilted lover while still managing to smile broadly, obviously more than content with the events transpiring around him.

It was as though each member played a part while still musically remaining tight and together, with Ox spending more time in and amongst his adoring public as he did the expanses of the stage.
New song ‘The Riot’ was received as though it had been a staple of the live set for years while old song ‘Bullet’ satiated long term fans craving earlier material.

By the time they finished with ‘Raise Hell’ Superheist had done that and then some, rounding out a quartet of Australian supports that would not be out of place headlining their own show anywhere in the world.
Making their first visit DownUnder since 2011, Portland metalcore heavyweights 36 Crazyfists marched onto the stage as though they owned it, and proved that they did as the opening song ‘Death Eater’ whipped the crowd into an early frenzy that spiralled messily out of control until the final sweat soaked note.

Vocalist Brock Lindlow’s larger than life presence was overshadowed only by the cries of jubilation from the crowd, who seemed to know what song was coming next before even the initial chord was struck.
It may have been eight years between drinks but not one person held it against the band, with guitarist Steve Holt and bass player Mick Whitney regularly swapping stage spaces with each other and engaging as many fans as possible.

36 Crazyfists are an old school band in the sense they let their music do the talking, running through ‘Bloodwork’, ‘We Gave It Hell’ and ‘Old Gold’ with reckless abandon, only pausing for breath long enough to lubricate their throats with Australia’s finest ale. I lost count of how many cans of Great Northern disappeared down the gaping chasm that Brock’s voice escapes from but certainly would not like to have been the person who told him to slow down.

In a humble yet authoritative performance, 36 Crazyfists attacked each song as though on a personal crusade to beat the audience into submission, and by the time Brock held the microphone aloft for the crowd to sing the chorus of set closer ‘Slit Wrist Theory’ the emotion of the occasion gave way to the realization that a marathon night of rock and metal was drawing to an end.

It was fitting that not one band returned to stage for an encore, with each person to a man leaving everything they had and more on stage during their allotted time.

Kudo’s must go to Superheist for giving local bands in each city the opportunity to join the travelling procession for the night, with the promise that this is just the beginning of what is planned to be an annual Heistfest tour delivering yet more promise for the future of Australian music.

PrevPrevious.IN FLAMES at Manchester Ritz
Next.EMPEROR at 170 Russell, Melbourne 3/4/19Next