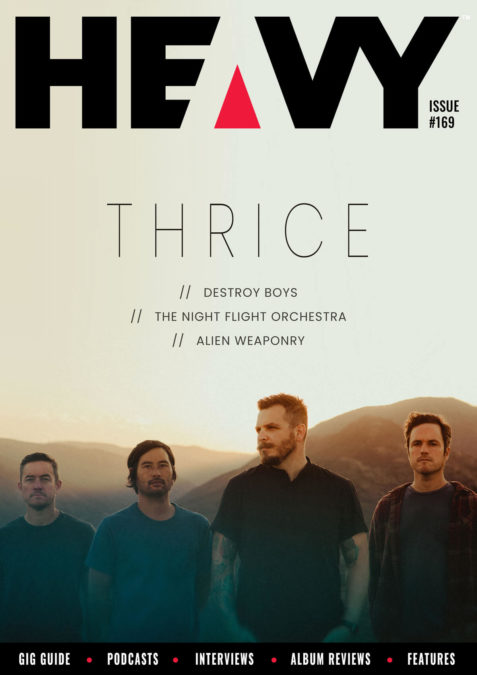 Yet another bumper week for Heavy Metal around the world, and this week HEAVY is proud to feature Thrice on the cover, talking about their upcoming album Horizons/East.

We also catch up with Destroy Boys, who are helping Fender launch their new Player Series Plus line of guitars, plus the lads from Alien Weaponry stop in to talk about their new album, and Dave Griffiths chats with The Night Flight Orchestra.

Brisbane metal outfit Minus Life return after a prolonged absence and after gracing the cover of last weeks Aussie Artists DigiMag, the boys step it up a notch this week with the premiere of their new single Order Disorder.

We review all the latest and upcoming albums from Sleep Token, Planet Fatale, All Hope Remains, Caution Boy, Face To Face and Duckwalk Chuck, plus we bring you a behind the scenes, raw and unedited interview with Derrick Green to take you behind the camera footage and into the life of an actual interview from start to finish.

In HEAVY Cinema we bring you the preview of A Boy Named Christmas plus our team reviews new movies Streamline, Vacation Friends and Martyr’s Lane, plus we bring you updates on Acorn Media‘s new releases of Shudder horror movies, with the added bonus of an opportunity to win yourselves one of six prize packs containing all four movies.

So sit back and crack a coldie, and until next time, stay HEAVY