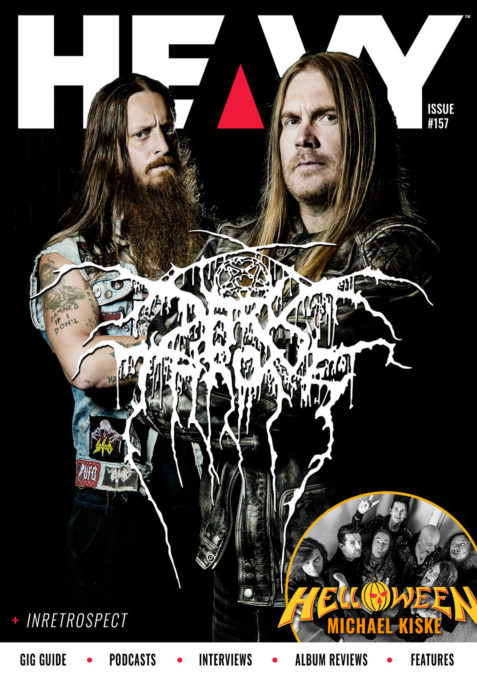 This weeks DigiMag features a host of top class interviews!

On the cover we host Darkthrone, with Fenriz allowing HEAVY one of only two interviews in this country to talk about their new album Eternal Hails. Ed Banger And The Kardashits tell us about their new EP and the weird and wonderful story around it while rising UK outfit InRetrospect talk about their latest single and future plans.

Carl Neumann returns to the fold with an awesome and rare one on one chat with Michael Kiske from Helloween, with a video (and audio) recording of the interview also attached for those who would rather not read…

We feature new music from Bullet For My Valentine, Carcass, Fear Factory, Sleep Token, Enforce, Carnifex, Switchfoot, White Stones, Rebel Priest, Bloody Hell, The Absence and Therion plus our team brings you our review of the new Beartooth album Below as well as live reviews of Caligula’s Horse and the Bribie Island show of Spring Loaded.

HEAVY Cinema brings you news on Demigod plus the trailer for the new Turner & Hooch as well as the latest reviews for Great White, Rogue, The Suicide Squad and more.

Despite everything going on in the world you can always rely on music!