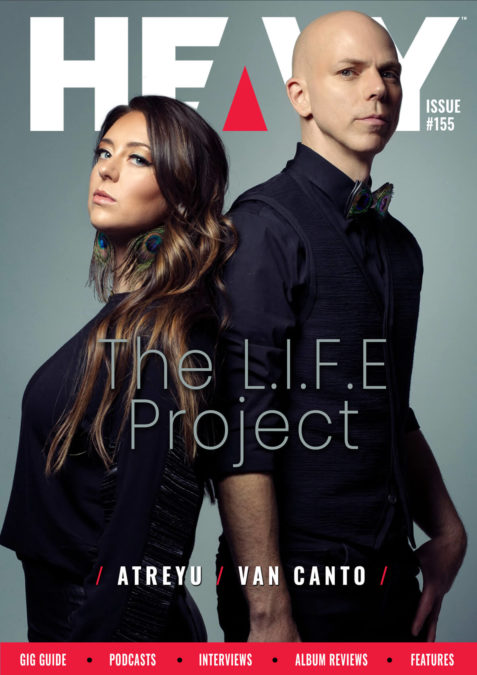 This week has seen a fair bit happen in the metal world, starting with the release of the new album Baptize from Atreyu. Frontman Brandon Saller stopped in for a chat about the new release this week and how he is handling his new role as lead vocalist.

Brand new outfit The L.I.F.E Project grace this weeks cover, with Josh Rand – yes, that man from Stone Sour – joining us to talk through the new venture, including the why, how and when. The band will be releasing their debut E.P in the near future and trust me when I say it is sensational!

We also chat with rising Aussie outfit Dregg about their new music, plus we premiere the new single “Nightmare” from Gold Coast outfit Goatzilla.

There’s plenty of new music from Sepultura, Hacktivist, Ed Banger And The Kardishits, Black River Delta, NO:IR, Tom Morello And The Bloody Beetroots, Buckcherry, Rise Against, Darkthrone, Silent Knight, Zero Theorum and Jason Payne And The Black Leather Riders plus we feature news on the new Sepultura live album, Livestreams from Epica and Anthrax, the first announcement for Wacken 2022 and a video update on the new album from Bad Wolves.

Popular regular column Bacon’s Slices returns, plus our team runs an ear over the new albums from Atreyu, Fear Factory and Helloween.

In HEAVY Cinema we bring you the new trailers for Wolfgang, Space Jam: A New Legacy, FEAR and Reminiscence, plus there’s the latest episode of The Popcorn Conspiracy and an interview with the stars of Scattered People.

That should keep you busy for a bit…