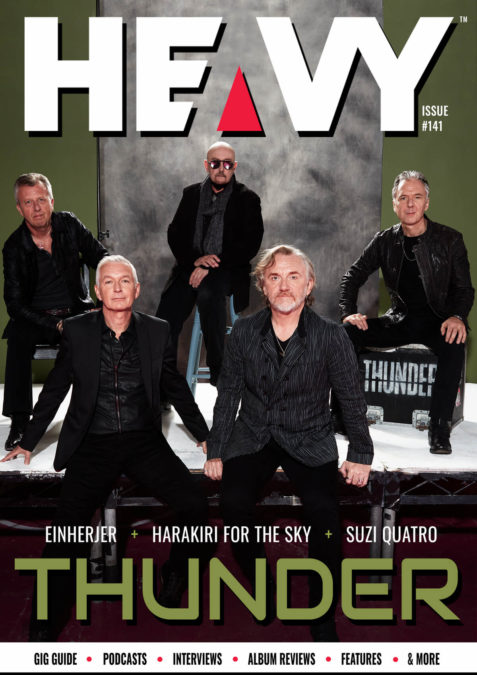 Which is just as well because this week we feature interviews with Thunder, Einherjer, Suzi Quatro and Harakiri For The Sky about all of their recent or upcoming albums.

We premiere a couple of rising Australian bands with their new singles. Days Like These have dropped “Gravity” along with an informative section on the bands and music that inspired the track. We Are Not Robots also stop in with their new tune “Just Lie Again”.

On the new music front we have fresh cuts from Sabaton, Epica, Crowne, Eisenhand, Demons, Lost Relics, Basterds, The LA Maybe, Under The Influence, Nervosa, Ghosts Of Atlantis, Oceans, Bloodspot, Mental Cruelty, A Crime Called and Bonecrusher plus there’s all the news on the new upcoming musical feast that is called Mansfield Rocks which features Clowns, Loser, C.O.F.F.I.N and more.

HEAVY Cinema features an interview with Frank Grillo from Boss Level and we also review that same movie. Other reviews include Raza & The Last Dragon, Blackbird, A Writer’s Odyssey and The Penitent Thief plus we have news about the upcoming Peter Rabbit 2 and Drive All Night.

The Popcorn Conspiracy is back with Episode 123 so whether it be music or movies or both that strikes your fancy, HEAVY is here to oblige.

PrevPrevious.ARCHITECTS ‘For Those That Wish To Exist’
Next.WE ARE NOT ROBOTS Demand The TruthNext