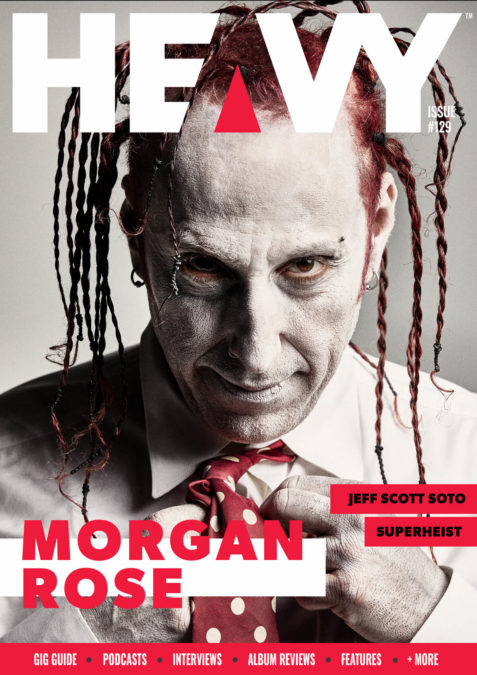 I would like to dedicate this weeks mag to one of our writers and possibly one of the best human beings and musicians on this planet, Simon Russell-White. Simon suffered potentially life-threatening injuries during the week which would have taken a lesser man. While he is in recovery now the journey back to health will be a long and painful one so we here at HEAVY – as well his extended music family – wish you well brother and I’m sure I’m not alone when I say reach out if there is anything you need!

It’s been a huge week of interviews, with Morgan Rose from Sevendust stopping in to chat about his new solo EP. Legendary vocalist (Steel Dragon from Rock Star anyone?) Jeff Scott Soto joined us from California, while Majestica called from Sweden to discuss their Christmas album with a difference.

DW Norton from Superheist joined us for a chat about their new single “Seize The Day” and also reveal exciting news about the upcoming new album from the Heist.

We have new music from AC/DC, Corey Taylor, Every Time I Die, Sami Hinkka, Full Tone Generator, Ricky Warwick, Cavo, Synastry, Evanescence, Avatarium, Soilwork and Brave The Cold, while there is great news from The Last Chance Rock & Roll Bar, a joining of forces between UNFD and The Faction, and the rescheduled tour dates for Steel Panther and Sevendust.

We are proud to premiere singles from The Amenta and Superheist plus This Goes To 11 with Mark Dalbeth makes an appearance.

Live music is starting to get going again and we caught Jeff Martin live, plus sat down to watch Atreyu‘s Livestream.

We review the awesome new album from Hatebreed, and this week HEAVY Cinema chats with Adam Egypt Mortimer, Nathan Phillips and Lee McClenagahn and reviews How Do You Know Chris…

Fuck me, I thought things were supposed to slow down this time of year!