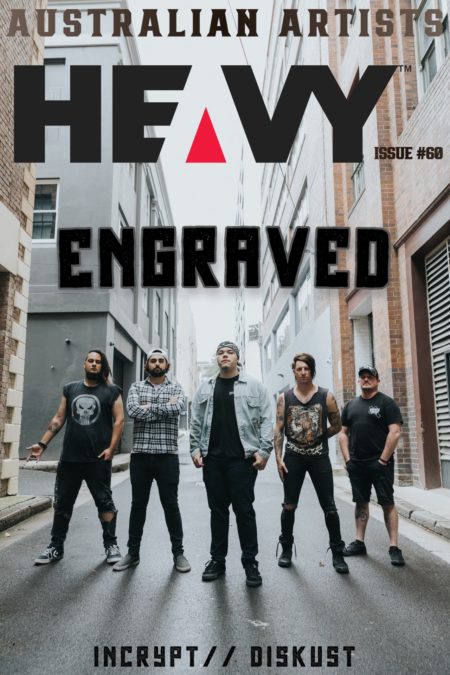 Allow me to be a little sentimental for a moment.

In just a few short days, HEAVY will officially turn 10!

The very first issue of HEAVY, thanks to the passion and dedication of an Australian metal princess named Olivia Reppas, was published on January 26, 2012. Back then, heavy metal and hard rock were genres that were shunned by mainstream media completely. Fans of that music relied on international magazines like Kerrang! and Metal Hammer to stay up to date on their favourite bands and discover new ones, which was fine, but there was no major local outlet available. Australian heavy bands gained little to no exposure except through underground channels and, often, to be a lover of metal music meant you were the minority and struggled to connect with like-minded souls.

HEAVY changed all of that.

Livvy changed all of that.

WE changed all of that.

Suddenly heavy metal had a voice – and a strong one at that – and as people’s knowledge grew, so did their power.

HEAVY has changed hands a number of times since then, and I have been fortunate enough to have been here through the next two phases of existence. Robyn and Shane gave me a start where many others wouldn’t even give me the time of day, but when HEAVY was taken over by Carl Neumann, things really started to happen for me.

Carl promoted me into the top levels of HEAVY and over a period of time tempered my often impulsive writing and taught me to be more articulate and open in my approach to music and writing about it.

He brought in audio interviews – to which I was initially opposed I have to admit – and he gave me the confidence to believe. Believe in myself, but more importantly to believe in the metal Gods and what they could offer.

When Carl confided in me some 18 months ago that he had lost much of his passion for the responsible side of HEAVY – of which I have found out there are fucken heaps – and that he was considering selling, my spidey senses went into overdrive. I knew my knowledge of the entire day-to-day operations of HEAVY was poor to say the least – I even struggled to understand how to submit an article on-line, let alone run the entire web site – but I also knew I NEEDED to be the one to inherit the HEAVY horns. I had spent 20 years of my life writing for practically anyone who said yes and learning the ropes, surely it was my time?

So I took over the leadership role after Carl offered to stay on board in a mentoring role, and the next evolution of HEAVY was now solely on me. To say I was shitting myself is an understatement, but over time I have learnt enough to get by and also introduced a few new ideas.

The one I am most proud of is addition of a weekly Digital Magazine dedicated only to bands and artists from Australia, New Zealand and Tasmania. Bands that work just as hard as any major international act but still struggled for exposure. Bands that have forever sent emails and new music to whoever had a mailing address but still found rejection at every turn. It was created as a means of hope, promise, and recognition for all of our bands and hopefully has played even a small part in helping someones career and confidence in their ability.

On January 26 the Bendigo Hotel in Melbourne will be hosting our birthday, with an assortment of bands playing in celebration of the past, present and future of Australian metal.

January 29 sees Frankies Pizza host the NSW leg of the party, with celebrations planned for Queensland later in the year.

If you are still reading, THANK YOU for your support to this point and I sincerely hope you continue the journey into the next decade and beyond. I’m not going anywhere.

There’s new music from Flickertail, Voyager, Part Paladin, Ocean Grove, Hailmary, Hatescape, Raising Ravens, Bad Moon Born and Red Bee, and in the news section we bring you all of the details on both HEAVY birthday parties as well as a special show in Sunbury next Friday night.

We bring you a special feature on Groglords and how you can get hold of liquor from your favourite bands, an important story from Support Act and you can help, plus announce the next show from metal tribute act Vulgar Display Of 90s.

Brisbane Nu-Metal legends Diskust have finally dropped their debut EP, A Dark Place, and our review team give you the verdict on that, plus Engraved’s EP and the new one from Pridelands.

Once again, thank you for your support over the years, and if you are in Melbourne or Sydney, please stop in and say hello next week.