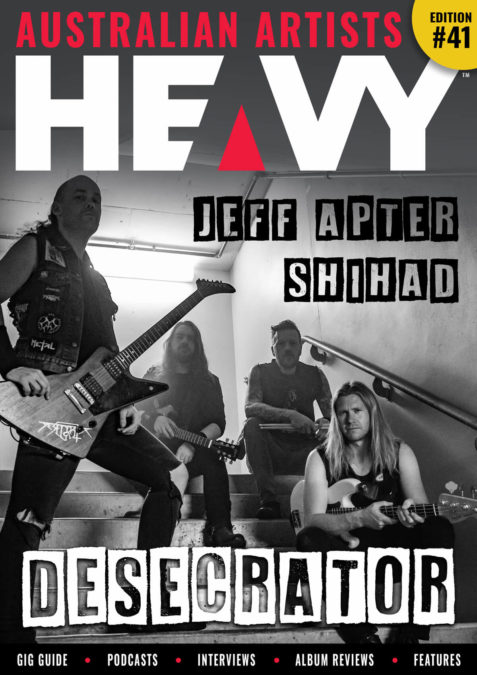 It’s been a big week in Australian metal, with Melbourne thrash metal masters Desecrator unveiling their latest album Summoning today. Frontman Riley Strong sat down for a chat with Dave Griffiths for this week’s cover, running us through the awesome album and other things happening within the Desecrator camp.

We also catch up with Shihad about their long overdue new album Old Gods, plus Jeff Apter gives us all the latest on his new biography Bad Boy Boogie: The True Story Of AC/DC Legend Bon Scott.

New Zealand multi genre outfit Kaosis premiere their new track Push Me, while we also bring you new music from Bodyjar, Death By Denim, The Last Martyr, The Nuremberg Code, Isotopes, The Cloud Surfers and The Silencio.

Two of Australia’s most loved festivals in Wallapalooza and UNIFY return, with both announcing their first line-ups during the week!

We also bring you news on Frankenbok‘s upcoming run of dates in South East Queensland, Vulgar Display Of 90s next show at the Mansfield Tavern, and the news on how you can help save one of this countries most iconic live music venues, The Bendigo Hotel.

We run the gauntlet over Desecrator’s new album Summoning, plus review the new ones from The Ugly Kings and Buckled.

Aussie music. The best in the world!