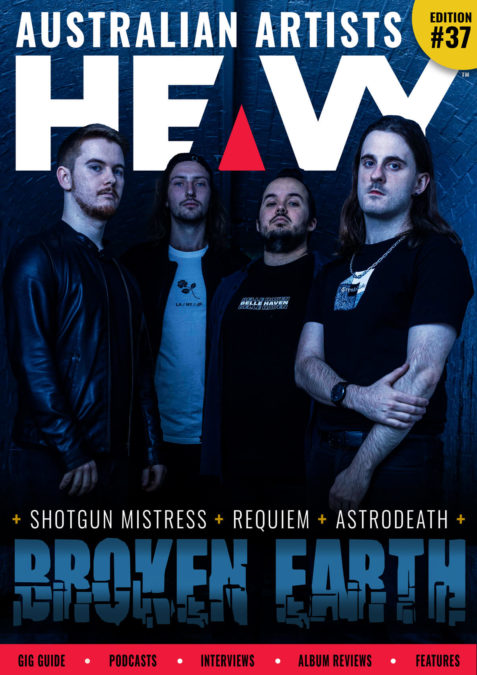 What a shit of a week it’s been.

I have lost count of the amount of shows that have been postponed or cancelled, but what I do know is I should be getting ready to party at Blacken Open Air this time next week, but instead I still don’t know if I will be allowed out my front door… It’s the word we currently live in, but that doesn’t mean we have to like it!

The HEAVY team have been busy this past week chatting to all of your favourite bands, with Broken Earth earning the DigiMag cover with a feature story from David Griffiths about their latest tune Somniphobia and more. Welcome back Dave, I’ve missed you!

We also catch up with Requiem, Dangerous Curves, Astrodeath, Fake News and Shotgun Mistress about their new music, plus Requiem gets featured with their single premiere for Cruelty Of Time.

There’s new music from Desecrator, The Amenta, Sit Down In Front, Shangrila, Kombi Killers, Halfwait, Clay J Gladstone, Audio Reign and Shotgun Mistress plus we bring you the latest news on Synaescope‘s EP, and the cancelling of BigSound 2021 and in a time when tours are getting cut off everywhere you turn it’s refreshing to have a host of announcements and amendments with While She Sleeps announcing some shows in Australia plus Something For Kate, Chasing Ghosts, The Meanies, Desecrator and Alarum all featured in tour news.

The mighty Screaming Jets return with the re-recorded All For One 30th Anniversary album on August 13 and HEAVY brings you one of the first published reviews on that plus all the latest on their tour to accompany the release. Our resident reviewer and all round good bloke Jimmy Glinster runs his honest ear over the debut album from 12Gauge Rampage as well, and as usual that read is worth the price of admission alone!

Try to stay positive and safe out there kids.