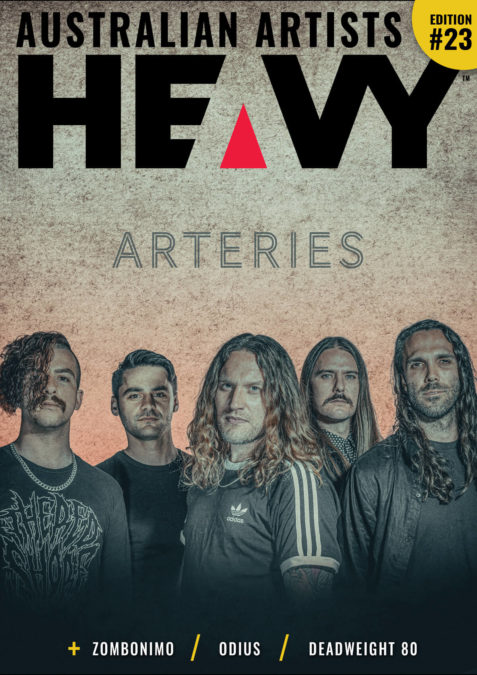 You may have noticed that both Digi-mags are a day later than usual this week for which I apologise. It turns out riding a motorcycle at 11 pm with a flannelette shirt on is not conducive to your health but that won’t stop me in the future!!!

We have a few interviews from some top-notch Aussie bands this week, starting with our cover feature, Arteries, who talk about their killer new album Outdoor Claustrophobic.

Odius also stop in to talk about their new EP Ignorance Paid In Violence and Zombonimo and Deadweight 80 catch us up on their latest singles.

There’s new music from bands such as Corruption Rising, Belle Haven, Avalanche, Dregg, Wartooth and Hidden Intent while in the news section Hidden Intent announce their tour – which sees them at Mo’s Desert Clubhouse this Sunday before heading South – and we also learn more about tours from The Angels, Plini and Dregg. Desecrator announce details of their re-release, sleepmakeswaves update us on their postponed tour, Blowhard give us info on their vinyl compilation album and we also feature details of the new AC/DC line of collectors clothes and accessories.

We premiere two great songs – “Under The Influence” from Arteries and “N.J.N.P” from Deadweight 80 plus we announce the addition of Flaming Wreckage to the upcoming Kilfest already monster lineup.

Kilfest takes place at the Old Kilmore Gaol on May 1 featuring King Parrot, Desecrator, Frankenbok, Diskust, Piston Fist, Deadweight 80, High As Hell, 29 Bones and now Flaming Wreckage! Tickets are rapidly disappearing so if you want to get your metal on I suggest you grab your tickets NOW.