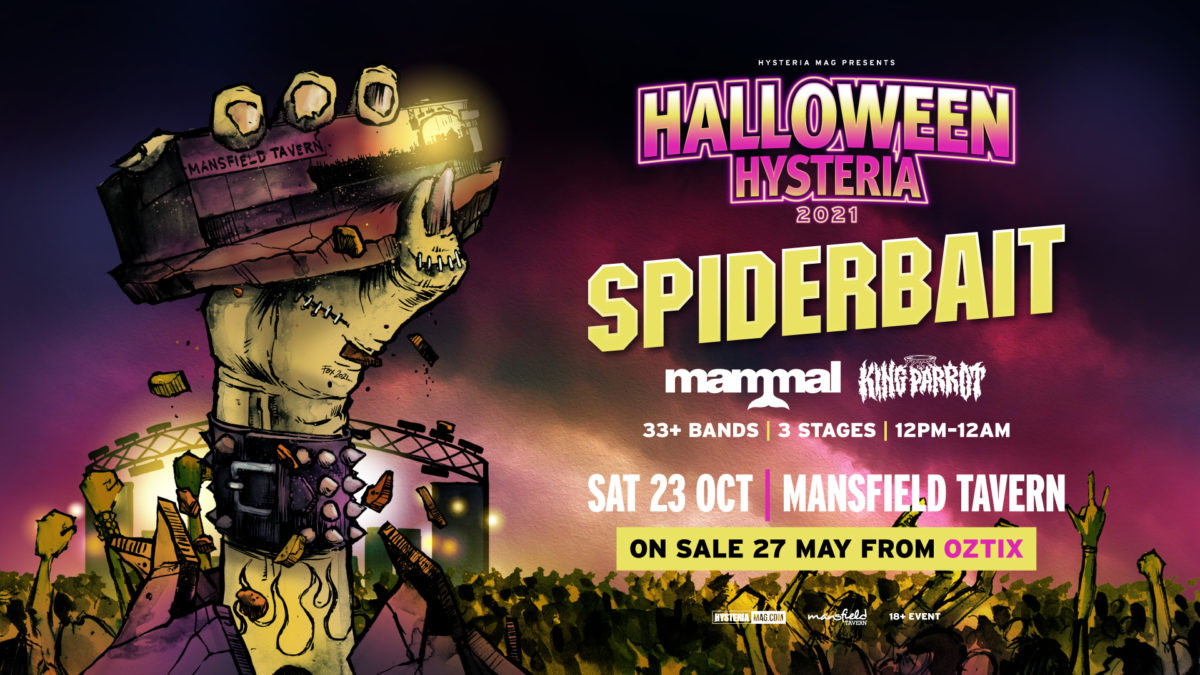 The creature returns … from the undead! Halloween Hysteria 2021 will be smashing it out of this dimension with a massive, incredible, stupendous, and SPOOKY star-studded line-up at Mansfield Tavern on Saturday 23rd of October!

This is yet another convocation of Australia’s best and LOUDEST punk, metal, and alt-rock bands, thrashing all day and all night over three huge indoor and outdoor stages.

Halloween Hysteria 2021 will move into the spiritual home of Brisbane rock ‘n’ roll, the Mansfield Tavern in the postcode on every rocker’s lips: 4122.

Bringing even more star power for the evening will be bright shining alt-metal stalwarts Mammal, plus insano-thrash devil-beasts King Parrot, making their second appearance at the festival.

Spiderbait are the chart-topping, multi-platinum selling, twice-ARIA award-winning, and first-ever Aussie band to win the JJJ Hottest 100 alt-rock trio that have become international standard-bearers for Australian alternative music. Singles such as “Calypso”, “Glokenpop”, “Black Betty”, and “Buy Me A Pony” have become iconic tracks around the country and around the world. Roaring back into life in 2013 after a long hiatus, Spiderbait are an unmissable live act and is the victorious final girl (and guys) at this special spooky event!

Got funk? Mammal has. A whole mess of funk. These funk-metallers have been smashing pinatas and moving bodies on the dance floor since March 2006, selling out shows across the country and across the world. Back from hiatus in 2017, Mammal will be blasting out a special set sure to set ears and hearts ablaze. Kerrang! Magazine doesn’t hand out perfect live scores to just anyone…

King Parrot are celebrating their tenth anniversary as a metal band—and jeez they’ve had a good decade. With three massive albums under their bullet belts (including one produced by Pantera legend Philip H. Anselmo) and legions of fans up and down this Great Southern Land, these lads are non-stop thrash monsters. Grab your bonox and feel that wallop in your chest as they carve up crowds with their brand of in-your-face chainsaw massacre-grade horror-show metal.

Halloween Hysteria alumni Stepson and Redhook have sold their shows out in Brisbane as of late, making them a red-hot attraction to the festival.

As is Halloween Hysteria tradition, there’ll be prizes for best creature feature cosplay, as well as make-up stations for punters to get into the spooky spirit.

To get your hands on these hot little tickets of spooktacular fun, you can pre-register at OzTix to be notified first, or sign up HERE.

VIP package, with exclusive entry to the after-party at Outpost, featuring guest DJ sets by some of the legendary line-up will also be available for $120 + online booking fee.