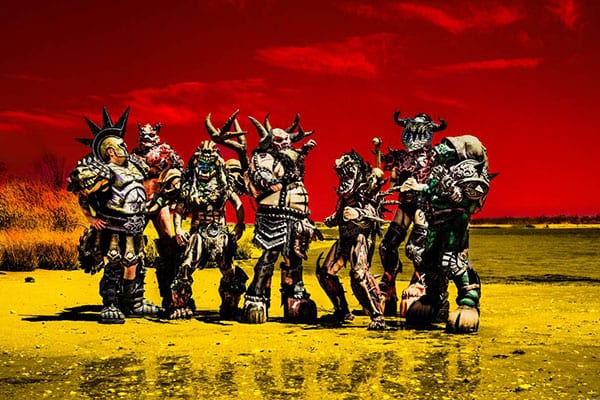 “We’re a band, a brand, and whatever you wanna call us. We’re just trying to make a few extra bucks.”

“You can expect the same thing we did last time which is upset your entire country, kill half the audience members and do all of your drugs,” spat Beefcake the Mighty, bass player from Gwar about their upcoming Australian tour. “We’ll probably have sex with a couple of kangaroos as well…”

Gwar have been the masters of shock metal since their inception in 1984. They have not only courted controversy at every opportunity, they have also embraced and sought it, with their music often playing second fiddle to their confronting stage show. Their performances include celebrity mutilation and blood and other bodily fluids by the bucketful making their way into and over the crowd, with Beefcake refusing to make apologies for their confronting nature.

“We just get up there and whatever happens, happens,” he shrugged. “It’s usually a lot of mayhem and death and vomiting and bleeding and crying and sobbing. It’s not our fault that when we cut people blood comes out.”

From the bands perspective on stage, Beefcake admits that things can sometimes get a little out of hand.
“Any time you are taking someone’s life there’s a great look on their face,” he smirked. “One kid actually died at the barricade once. That was hilarious. We just threw him onto the pile of corpses that we keep in the back of every venue and continued with the show!”

Aside from their on-stage antics, Gwar are best known for their outlandish costumes which are generally made from latex, styrofoam and hardened rubber. The hideously grotesque extensions of their personality, although appearing cumbersome and bulky, actually cover only minimal areas of their body, with makeup covering and accentuating the rest. As such, Beefcake scoffs when asked if he is worried if the Australian climate will react adversely with their attire.

“It’s no big deal for me,” he shrugged. “We played Warped festival recently in the Summer here and it was 118 degrees Fahrenheit so your heat won’t bother us at all.”

The costumes are the perfect anecdote for the band’s image and sound, with Gwar’s core thematic and visual concept revolving around an elaborate science-fiction mythology portraying band members as barbaric interplanetary warriors, a theme which branches into and permeates through all of the bands albums, videos and live shows. Such is the nature of the band’s success with their appearance, they have also branched out to include items varying from merchandise to toiletries to beer to sauces, with Beefcake admitting the brand is now almost as important as the band.

“I would say so, yeah,” he measured. “We’re a band, a brand, and whatever you wanna call us. We’re just trying to make a few extra bucks.”

One thing the band has yet to invest in is the sex market, with Beefcake seemingly liking the idea of branching into such territory.

“We could probably bring out some Gwar fleshlights,” he pondered. “Do you guys ever mess around with fleshlights? It’s a rubber vagina stuffed into a flashlight case so you can have sex with a flashlight. Now that I know you don’t have any over there I’m gonna bring a whole case over. I think they might have already been patented so I’m gonna run the gauntlet and just sell them on the black market, but don’t tell anybody.”

Tragedy struck Gwar in 2014 when frontman and lead singer Dave Brockie (Oderus Urungus) died of a heroin overdose, leaving the group without any of their original members. In a confusing twist of irony, former member Michael Bishop, also known as Beefcake the Mighty in his original stint with the band, returned to take over vocal duties under the new title of Blothar. When pressed on the difficulties of having the original Beefcake return to the lineup and the potential confusion inherent in such a decision, Beefcake becomes a touch indignant.

“What do you mean the original?” he roared. “I AM the original Beefcake. There’s only one Beefcake. I do get offended by that every now and then…”

Last October Gwar released their first album with the new Blothar at the helm, with Beefcake calming when asked if the process of recording and releasing new material without Oderus was difficult.

“Yeah, it was definitely tough,” he sighed, “but also a little less stinky. Oderus was odorific if you know what I mean, but he was always in our plans as we were making that album and we were trying to make him proud and hopefully that’s what we did.”

In a test of faith, existing fans of the band also embraced The Blood of Gods.

“It was fantastic,” Beefcake enthused of the reception the album received. “The album went great, the tour went great, we had lots of good reviews and I think people genuinely enjoyed the album. It’s a love record at the end of the day and I think that’s what people need more of in their lives.”

As for goals with the album, Beefcake says there was ever only one outcome the band wanted to achieve.

“We just wanted to put something out so we could go on tour and do what we normally do,” he said honestly. “We wanna go out there and destroy cultures like yours. Usually, you need something to promote to do that otherwise people won’t show up.”

Just to emphasize that point, Beefcake closed with this on why fans should come to their upcoming shows.

“The only message I have to fans is just show up,” he offered. “It’s not like we’re there every day, come on.”