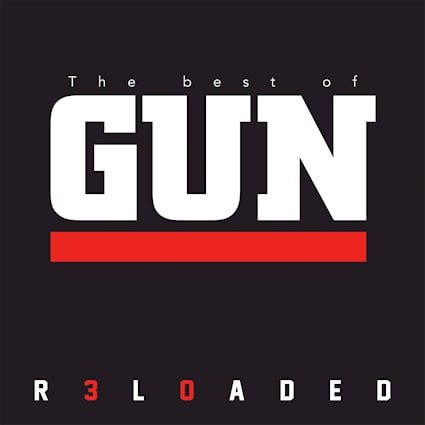 ‘R3L0ADED’, released on November 29th via Silver Lining is described as GUN’s celebration of its illustrious past, while it also forcibly underlines that their focus is fixed firmly on the future. What we have are ten of their best singles, handpicked by the band, packaged with ten cover versions that display their eclectic taste.

The ten original tracks here span the band’s seven studio albums, with only their critically acclaimed 2015 album ‘Frantic’ missing out on the final cut. The standards feature for sure, namely ‘Better Days’, ‘Steal Your Fire’, ‘Don’t Say It’s Over’ and ‘Higher Ground’ but a pleasant surprise also pops up.  ‘Something Worthwhile’ from their third, and probably most successful, album ‘Swagger’ is chosen ahead of other singles from the same album. Completely different from anything else the band has ever produced, Dante Gizzi’s homage to old school hip hop certainly grabs the listener’s attention, especially if ‘R3L0ADED’ is your introduction to this incredible band. 2012’s ‘Break the Silence’, the band’s comeback single after a five year hiatus, along with ‘Take Me Down’ and ‘Favourite Pleasures’ from their latest 2017 album can definitely hold their own among the older classics! Proving that drummer Paul McManus, Andy Carr on bass and second guitarist Tommy Gentry along with brothers Jools and Dante Gizzi, the mainstays since day one, are taking the legacy of this amazing band in the right direction.

The fact that other classics such as ‘Inside Out’, ‘Money (Everybody Loves Her)’, ‘Shame on You’ and ‘Welcome to the Real World’ aren’t included shows how difficult it must have been to choose these ten tracks. ‘The Best of GUN’ should not really be a ten track album! The absolute best of the mighty Glasgow quintet would at the very least fill a lengthy double album! And even then some essential tracks would have to be left over for the Japanese import!

GUN have recorded some cracking cover versions over the years. From Thin Lizzy’s ‘Don’t Believe A Word’ to Rage Against The Machine’s ‘Killing In The Name’. Side B of ‘R3L0ADED’ features ten cover versions, including, again, a couple of surprises. Kicking off with the riotous (You Gotta) Fight For Your Right (To Party) which sounds like just as much fun to record as it does when the boys play it live! One of the best guitar riffs ever is made his own by Jools Gizzi on Hot Chocolate’s ‘Every 1’s A Winner. And by the time I got to Stevie Wonder’s ‘Superstition’ I totally forgot about the missing classics from disc 1! I wouldn’t have thought that song could ever be bettered, but GUN have only gone and managed it! The Clash’s ‘Rock The Casbah’ is also a song so iconic that it shouldn’t ever be covered. Yet GUN take it, make it their own, and totally nail it! I then come across my favourite band (GUN) covering one of my favourite songs (Union City Blue) by another of my favourite bands (Blondie). This really is the stuff dreams are made of! Add a couple of f***ing amazing songs that first appear on the East End EP, namely Hozier’s ‘Take Me To Church’ and ‘Everybody Knows’ by The Dixie Chicks, and Bowie’s ‘Pin Ups’ doesn’t quite seem like the greatest album of cover versions anymore! Of course no GUN covers album would be complete without their biggest hit single. Their 1994 top ten version of Cameo’s ‘Word Up’. Honourable mentions go to a cracking version of Iggy Pop’s ‘Success’ and (here’s another one of those surprises) album closer ‘Diamonds’ by Rhianna

Missing classic tracks aside, ‘R3L0ADED’ is a triumph! A true celebration of the band’s illustrious past and an album worthy to be titled ‘The Best of GUN’