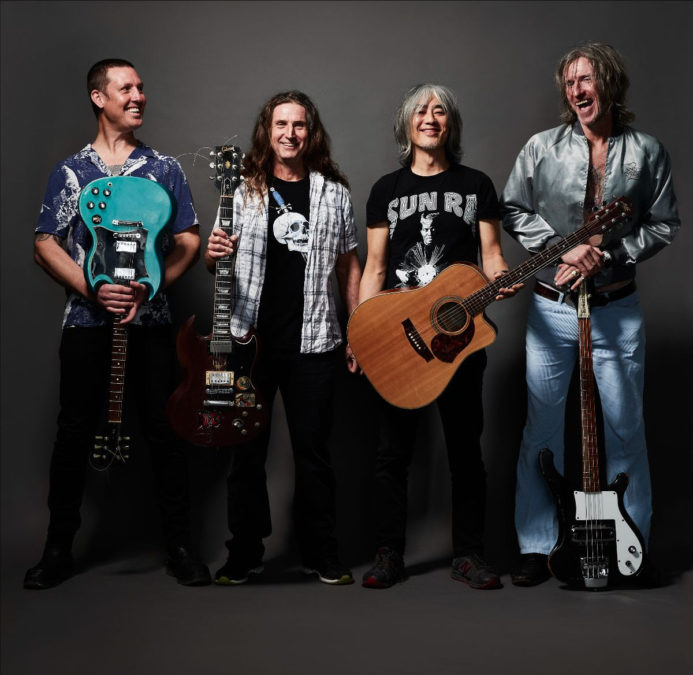 The Hard-Ons are almost more Australian than Vegemite.

For just shy of 40 years guitarist Blackie and bass player Ray Ahn have punked and rolled themselves into Australian music folklore with their blending of punk tempos, hardcore attitude, heavy metal riffs and surf-pop melodies, coupled with a dry and laconic sense of humour, catapulting them into the hearts and eardrums of generations of fans.

The recent announcement of You Am I frontman Tim Rogers to The Hard-Ons was met in some quarters with surprise, but most with excited anticipation, with the amalgamation of two of this countries most loved bands a recipe for success.

That anticipation was justified with the release of the bands first single with Rogers, Hold Tight, satiating long term fans and silencing the doubters with its fresh approach to The Hard-Ons sound without overhauling the finer points that endeared the band to many.

Rogers and Blackie joined HEAVY for a fun chat recently to discuss the next phase of the Australian juggernaut that is The Hard-Ons and their new album I‘m Sorry Sir, That Riffs Been Taken, which is out on October 8.

We start by welcoming Rogers to the band and asking how it came about.

“The call came – and I thought it was a wind up – but Ray’s always been straight up with me,” he began. “For thirty years he told me how bad we’ve been when we’ve been bad in my other band, and he’s been so generous, so I decided to take it seriously and sobered up a bit and then drove up to Sydney and had two rehearsals and it was so much fun and terrifying. I’ve never rehearsed harder in any situation. “

“You found it terrifying, but fucken hell, it was a pleasure,” Blackie cut in, laughing. “So your suffering was my pleasure (laughs).”

“I think I turned up the second rehearsal,” Rogers continued, “and I was a bit more relaxed and had more fun because the band said ‘hey Tim, why don’t you just choose a set list’ and I thought well, I’ve got a wishlist of about 97 songs and I whittled it down to about 20 something, and apart from songs on the record they were 95% songs from the last six records. My purpose at the moment is to get people that haven’t heard those records to hear them, as well as the one we just recorded. After the initial terror, it was just joy. And the recording… I did all my vocals in a day and a half, and I was really shocked to find out that Pete and Ray and Murray had done the tracking similarly, like a day and a half, and I couldn’t believe it. I thought this is like trying to cage a tiger or jump onto it.”

In the full interview the chemistry of Tim and Blackie is evident as they bounce off each other, talking more about Tim joining the band, the upcoming album, why they chose Rogers as singer, how, if at all, The Hard-Ons will be different musically, humour in music and why it’s important, what Tim brings to The Hard-Ons and more.