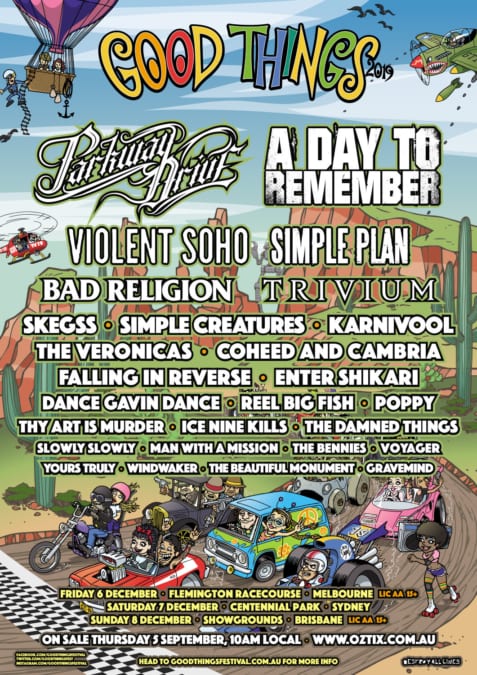 Good Things Festival 2019 line up is here and it’s a bloody beauty mate! A mixed bag of heavy goodness + and an anomaly…

So, let’s get the headliner out of the way first! Fresh from headlining major European Festivals such as the mighty Wacken and Bloodstock, metalcore come modern thrash metal stars come, pyromaniacs, the boys from the streets of beautiful Byron Bay, Parkway Drive.

Right beside them in poll position are USA’s A Day To Remember.

Violent Soho is placed right behind them for their only Australian shows of 2019 besides Simple Plan.

Then there’s punk the legendary Bad Religion. Next is Simple Creatures with Mark Hoppus (blink-182) and Alex Gaskarth (All Time Low) followed by a “real metal band” Trivium!

Representing the deathcore vein is Thy Art Is Murder.

Surf rockers Skegss are in.

Prog-ish bands, Karnivool, Coheed & Cambria and Voyager (who are lower on the bill but good enough to be mentioned here!) will please many.

Enter Shikari will please the alt-rock/metalcore like-minded too.

Errr… Dunno why, but local pop band, The Veronicas are on the bill… who we’re sure will be miming their way through the set… Why? Such an anomaly…

And there is Falling In Reverse with Dance Gavin Dance.

At the bottom but by no means least are a bunch of ripper Australian bands on the circuit including The Bennies, Yours Truly, Windwaker, The Beautiful Monument and Gravemind.

Brisbane and Melbourne shows are licensed and all ages 15+ while Sydney licensing
is still to be confirmed. Venues and lineup subject to change.