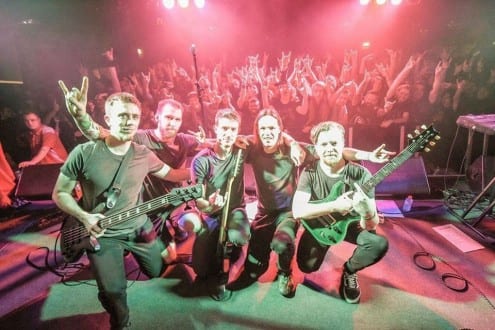 Tonight might have been the hometown stop for Melbourne melodic/progressive death metal favourites Be’lakor—in celebration of their critically-acclaimed, new opus Vessels, no less—but it was the newly-rejuvenated Hadal Maw who stole the show.

For the sizable crowd who turned up early to catch them, the night’s set was only further proof that Hadal Maw are one of Australia’s most promising, extreme metal acts. New vocalist Sam Dillon twisted and cavorted at the front of stage, spouting apocalyptic proclamations like Nyarlathotep himself, while the rest of the band laid down a dense, cosmic horror-inducing soundscape behind him. The band are already formidable on record but they absolutely thrive in live setting, where all the intricacies of ex-Alarum drummer Rob Brens and guitarists Nick Rackham and Ben Boyle (also of the recently-revived A Million Dead Birds Laughing) can be fully appreciated.

It wasn’t long after, Eye Of The Enemy absolutely exploded onto the stage, albeit to a more uneven result. Mitch Alexander isn’t the finest vocalist in the land, but he’s undoubtedly one of the most enthusiastic—whether about his band’s own music, or the new Periphery album—and he proceeded to whip the growing crowd into frenzy. The rest of the band’s performances were faultless, displaying a level of tightness and professionalism oft-missing from the local scene, with Orpheus Omega guitarist/vocalist Chris Themelco seamlessly slotting into the line-up, alongside guitarist Chris Kane and bassist Ben Hunt, to form one of the tightest string sections Melbourne’s metalheads had ever witnessed.

Up next were Hybrid Nightmares, who—though well received—were perplexing to say the least. The band have been mainstays on the local extreme metal circuit for some time now, yet they still don’t quite seem to have worked out exactly what they’re aiming to achieve with their music. Black metal is a precarious genre at the best of times, and arguably the most variable in all of heavy-music’s many subgenres—often ranging from the most extreme and offensive of realms to those downright silly. Hybrid Nightmares’ live show seems to have its feet firmly planted within the campier-grounds of the genre, with an emphasis on costume theatrics and wacky stage props. Yet their sound is decidedly, and confronting, low-fi, and their most recent release(s) is a series of conceptual EPs, contemplating the inevitable downfall and rebirth of humanity. Strange bedfellows indeed…

Topping things off was yet another faultless and mesmerising set from the mighty Be’lakor. The band are one of Australia’s most successful and revered extreme metal acts, and for good reason. Few bands are as professional and awe-inspiring as Be’lakor are when it comes to live performance, and—after a somewhat rusty, and technical-fault-plagued performance the last time the band graced The Corner Hotel’s stage, it was great to see them back in top form. Surprisingly, they only played two songs from their brand new, critically acclaimed, opus Vessels, largely sticking to older material from Stones Reach (2009) and Of Breath And Bone (2012)—so that the set seemed more like business as usual from the band, rather than a celebration of their new record. However, this is understandable, given that all of their songs are nearly ten-minutes long, and any chance to catch the band on the live front is always a worthwhile and rewarding venture.