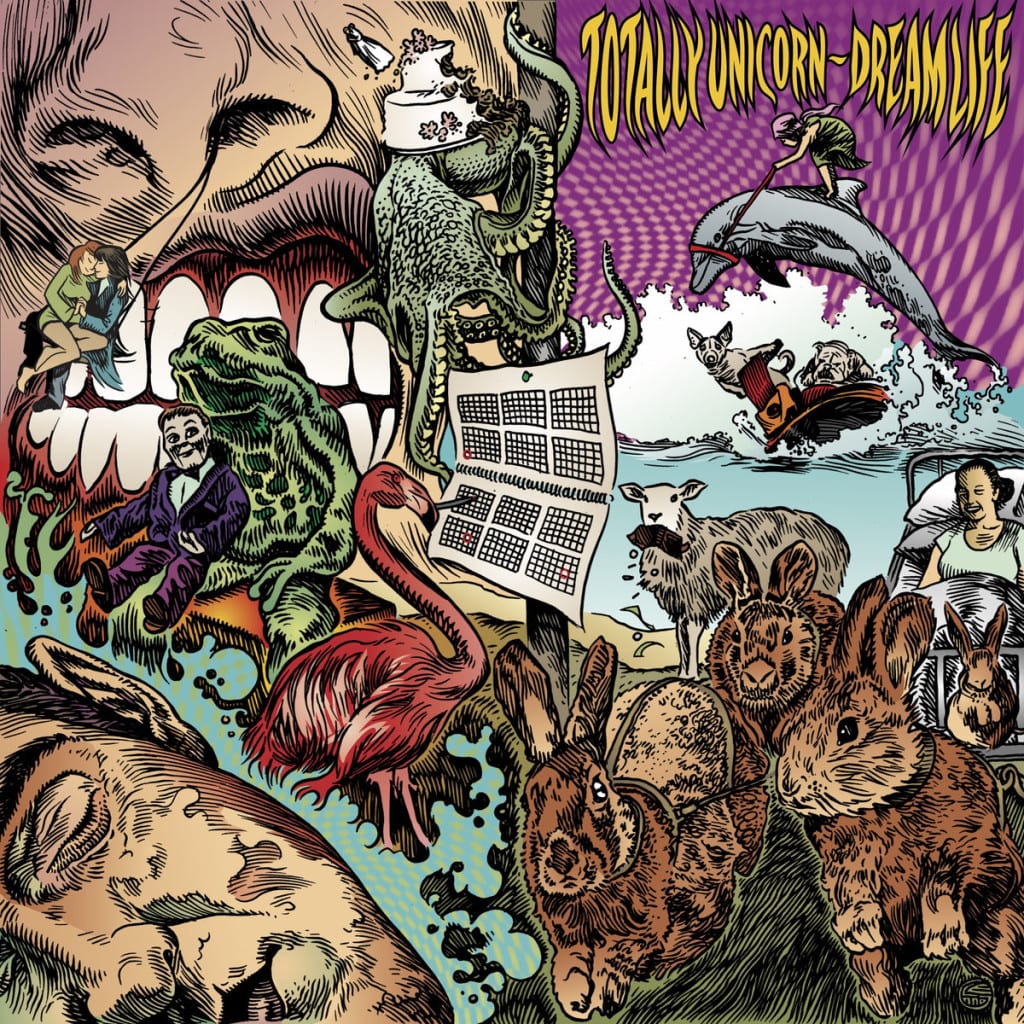 It’s probable that there isn’t a band in Australia who has had more of an impact on the heavy music scene (and even the not-so-heavy, unbelievably this quintet even supported Tonight Alive on an Australian tour) without releasing an album than Sydney’s Totally Unicorn. Well the “Happy Hour” bell has been rung for this five-piece and the booze specials need to be inhaled in under 30 minutes for Australia; metaphorically this writer is referring to the eleven tracks of chaotic math-metalcore which is the band’s debut album ‘Dream Life’. Of course it would be heavily endorsed by Totally Unicorn to enjoy this record with numerous beverages in tow.

With a slew of EPs, singles and split releases; plus arguably the most hilarious to borderline insulting and outright offensive film clips (let’s face it, YouTube is happy to host videos of objectionable nature, but TU managed to have one of their films “removed”), it is with unbridled joy to see a full-length album from these New South Welshmen. Known better for their disorderly, nude, booze-soaked and greatly grotesque live shows which are honestly fascinating, the simple question is: Can Totally Unicorn include an equal adoration with an LP?

In short: Yes, the band completely can and have with Dream Life. Just like at every performance from this outfit though, there has to be a “But” as front-man Drew Gardner consistently exposes with glee. But, do not feel any apprehension toward this sentiment, this variation in context comes with a surprise description: Sophistication.

No, this scribe isn’t intoxicated and yes I have witnessed several Totally Unicorn concerts to their full effect; genuinely this is an impressive release and somewhat unexpected. An excellent inebriated slosh of infectious hardcore punk is what is “fairly” anticipated on this outing, but that is matter-of-factly a pebble on this colossal mountain of a record. The band haven’t lost their way, truthfully they are just finding it.

Unicorn’s proper influences are really utilised brilliantly throughout these eleven songs. Converge shines through on Old Cute And Putrified and Convict Brick (with High Tension’s Karina Utomo enforcing a memorable guest performance), The Dillinger Escape Plan and The Chariot glow throughout Welcome To Slugtown and Glow Of The White Teeth and TU’s songwriting talents really come into place on You Smell Like A Trophy which hints at the later part of Poison The Well’s career. This is just the tip of the ice cube in the cooling drink though.

A pinch of Botch is employed on Borrow (a very suiting song title perhaps?), the criminally underrated gothic post-punk hardcore band The Banner oozes their way into Part Time Model and latter day Cave In is an incredible surprise with TU’s title song Dream Life. Stupefied yet?

So what is to be said in summary? Is this an identity crisis? Are Totally Unicorn in rehab? Very doubtful. There is still that party-edge to the entire record which will have you in your tighty-whitey’s dancing on your partner’s kitchen table after the bender last night even though your parents are visiting for brunch in a matter of hours. But(t) what this five-piece have crafted is an enlightened album showcasing the best parts of progressive hardcore from the innovators that essentially, they can call their own. Although it is the band’s first EP Horse Hugger which featured this track title, it seems appropriate to mention that maybe TU should contain the song Expose Some Wizards in their set-list; it is what they have accomplished with Dream Life.

Get your copy of Totally Unicorn’s ‘Dream Life’ today @: