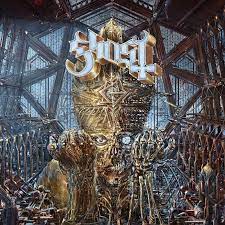 Ghost are a band that’s known as possibly the best non-metal, metal band ever. So, are they metal, or is it just pop with spooky costumes? Who really cares, I don’t, I’m just here to tell you if the new album Impera is any good. I’ll be honest straight up though, they never really impressed me, and I never quite got the hype, and even giving them a chance live in a dark room with creepy lighting didn’t even do it for me.

So, now we’ve got that out of the way, let’s focus on the album. Opening track Imperium kicks off with some gentle acoustic guitar, which is shortly joined by some snare rolls and dualling lead guitars. It slowly builds intensity as some tom fills start to roll through. Oh, and that’s it, it’s just an intro.

The first actual song, titled Kaisarion, features more dualling guitars and a big high-pitched vocal squelch. It’s a bit of a rocker. I guess it sounds like what you’d expect from Ghost with possibly a little more guitar through the mix than some of the previous efforts.

Spillways is up next, and its electronic keys intro reminds me of something straight out of the 80’s. Tragically, I might add, very tragically. Yeah, this isn’t metal aye, at least not entirely, maybe the odd riff here or there. I mean, it’s not even heavy, it’s just what it is, and I’m not even sure what that is. The spillway to your soul apparently.

The following track Call Me Little Sunshine is a little heavier, and a lot darker initially. The choruses get a little pretty and shine a little sunshine through. I actually don’t mind this track due to its dark overtones, but then it loses me, and then kind of drags me back in again, almost.

Hunters Moon tries its hardest to get its metal chug on after a less than heavy intro. Those clean vocals are starting to grate on me, though. The instrumentation in this track is pretty tasty, and the guitars do get reasonably heavy. Add some gospel chants in the background, and they get their spook on again.

I’m up to track 6 now, and I thought I could see where this was going until Watcher In The Sky actually started like some kind of traditional metal song. It’s even got a decent chug along section throughout the verses. Metal, maybe? Let’s just see where it takes us. Did I just hear a divebomb and some harmonic squeals? Did Ghost just discover metal?

I was about to give up on this album, but that last track managed to slightly drag me back in. Now I’m facing a track called Dominion though, and the thought of this possibly relating to that Netflix documentary of the same name has me doubting my choice to continue. Turns out it’s a minute of half of pipe-organ, and a complete waste of time. I guess it is much like that documentary after all.

Horns? No one asked for a fucking brass, this isn’t ska! Luckily, though, they are followed with some actual metal. Twenties is the heaviest track yet, and it is momentarily free of clean vocals, and instead full of almost spoken word husky ramblings not too dissimilar to Marylin Manson. Unfortunately, it hits a chorus which is again a bit too pretty. A last-minute guitar solo almost saves the track.

Darkness At The Heart Of My Love is an acoustic ballad that I pretty much listened to about 20 seconds of while skipping through to find an interesting bit. Yeah, about that … Griftwood, Bite of Passage and Respite Of The Spitalfields are the remaining 3 traks on the album. Groftwood was kind of ok, but much of the same and Bite Of Passage was a 30-second interlude which kind of acted as an intro for Respite Of The Spitalfields which was a slow burner. It was an interesting slow burner though with a few heavier sections. Probably the most interesting track on the album to be honest.

So, after all that, I’ve officially decided that Ghost are not metal, but I think we all already knew that anyway. That is just my opinion though, and we know what opinions are like, and we definitely know I am one of those.

Just like a fine cask of goon, it’s an acquired taste!