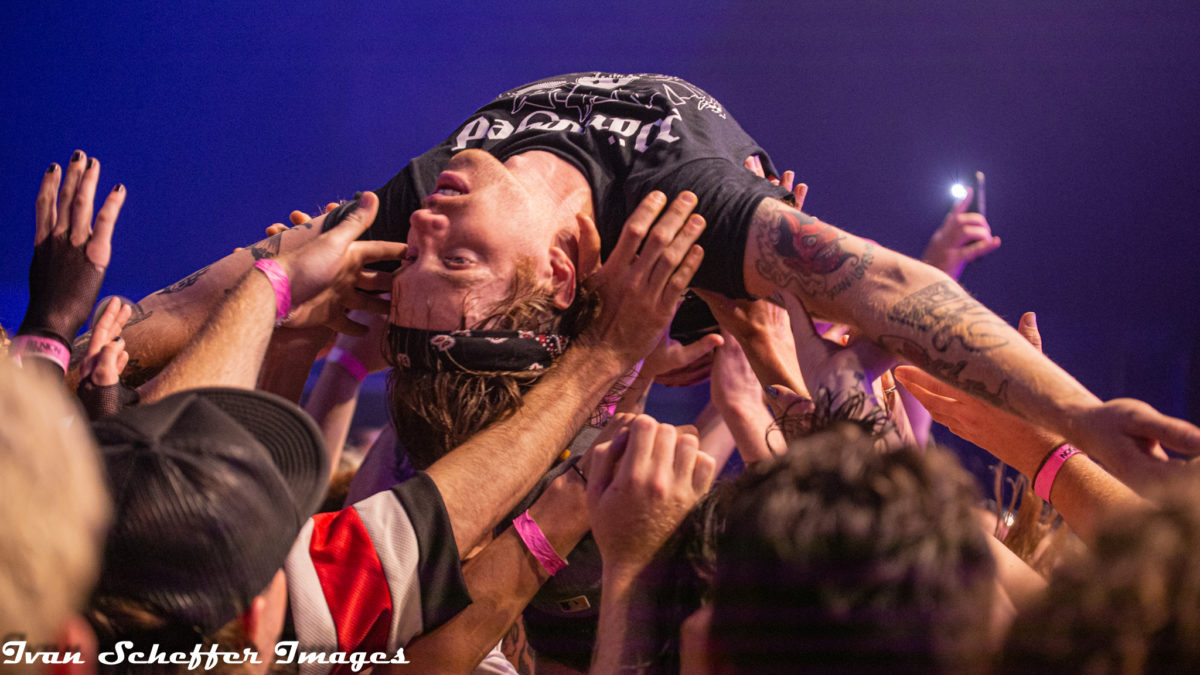 So…Victoria’s open again for the time being, and now eager and willing music lovers of all genres are not running in fear at the prospects of attending a “super spreader” event!

Well several thousand of those wonderful and unified punters that stepped out for a perfect Saturday in March for the magnificent FULL TILT festival at the pop-up tent area known as Reunion Park in Richmond were not worried anyway.

I have been an avid concert and music festival attendee for over three decades, and the amazing opportunity that I have to speak to bands and attend gigs throughout those decades has meant I sometimes would be out two to three times a week. But thanks to the pandemic that, as we know, has made it impossible and Satan knows how I’ve missed being in attendance amongst other like-minded humans, drenched in the stench of sweat, beer and cigarettes as did those that I spoke to during the course of last Saturday.

In the last two and a half years I have been to just three gigs; FULL TILT being the third! The last gig I went to, I almost experienced what I would consider to be a mild case of social anxiety, purely at the weird prospect of being surrounded by other people and having lost the ability I think to connect with other people socially. It was an unpleasant experience and took me by surprise.

So, last Saturday I woke up and with my last gig experience at the front of my mind I almost piked and pulled out of going, wondering if my own company was a better safer option staying home and day drinking other than being around a few thousand friends and experiencing the wonderful world of human interaction and connectivity once again. Thankfully, I coughed up the courage (A little post-covid 19 pun there, yeah I have just recovered from it!) and ventured out into the big wide Melbourne ‘burbs and caught up with a bunch of new and old friends that were united in the emotional oneness of music and its universal bond.

I got to the venue, purchased my first of several overpriced beers and walked in to witness Void Of Vision. A band that are not on my radar (as were many) but nevertheless my opinion was overshadowed by the intensely hyped crowd ready to have their feelings lifted by the mood of being in the same tent as a group of individuals playing heavy soundtrack of post lockdown blues and lethargy.

I tried to catch a few songs of as many bands as I could, venturing to stage two to see the tail end of Drown This City. This was one of many first for me and DTC were fantastic, albeit playing to a disappointingly thin crowd. The size of the audience did very little to appease the energy and intent of the band as they played as though it was a stadium full of followers. Drown This City was on point and killer, you all need to make sure you check them out at your next available opportunity.

I ventured back to stage one to see the final tracks of Make Them Suffer who were playing to a full capacity tent, slaying the converted with every ounce of their capabilities. Another beer in hand, waltzing back to stage two to catch Antagonist A.D. And what a show they delivered. Full of bravado and aggression, it was great to hear their audience move in one unifying pulse with the bond and unity that the entire Full Tilt crowd experienced on this one awesome day. At one of the brief interludes between songs, vocalist Sam gave a heartfelt speech to the crowd about what it was like for not only all bands being finally able to once again be unleashed upon the world and that together on this one special Full Tilt day, regardless of the color of our skin, identity of self or however we want to perceive ourselves that we are as a heavy/rock music community one! Bound in a family of familiarity and oneness. Classification and prejudice of someone because of their individuality has no bearing on their right to coexist with those that stand honourably beside another human being and be loved purely based on the fact that they are by our side as Brother, Sister or anything else. Long story short, Antagonist A.D. say it straight and their performance was the musical/vocal point of the days crowd bonding as a single breath of many gasped throughout the day.

After the Antagonist set I had to have a sit down and recalibrate to prepare for Psycroptic. The self-appointed Tassie Devils put on a set that made the full tent pulse with the beautiful brutality of an extremely warranted circle pit of insanity reaching from tent pole to tent pole (side note: I am too old to partake in those kind of shenanigans these days, so I just stand pressed against the front barrier getting pushed into metal barricades as payment for my lack of mosh participation!) Psycroptic fucking rule and this was my first glimpse of insanity at its best on the day.

So at this point after Psycroptic I stopped wandering between tents, enjoyed a few cold bevvies and just mingled/coexisted with the Full Tilt crowd and made new friends for the day. The general topic of conversation was “Who are you here to see” and “How fucking good is it to be out and at a festival again?”. Every question and answer responses were well received and respected and a goodbye was left with a mighty fist bump exchange and we parted ways to see our bands of choice. It was beyond awesome!

Next band for me to witness was Thy Art Is Murder on stage one. This was my main band for the day and I would be lying if I didn’t say that I was mildly disappointed to see that CJ would not be on stage screaming at us all this evening. For reasons I couldn’t hear due to the lack of being unable to get near the stage, Thy Art’s vocal replacement did a very commendable job with massive shoes to fill with apparently just two days’ notice. My unimportant disappointment aside, Thy Art Is Murder were awesome.

Yes there some big name bands on the bill that got punters excited such as Frenzal Rhomb, The Bennies, Clowns etc. but they’re not my taste, I caught some of In Hearts Wake who were excellent and rounded out the day with headliners Northlane whose impact on the audience was met with rapturous love equal only to the heat of on stage flames and loud breath of gas and smoke machines. Walking out the gates at about 10 pm I reflected on so many positive and awesome emotions and feelings about agreeing to attend Full Tilt.

The main being reconnecting and interacting with musical humanity once again, the faith and patience of the organisers of Full Tilt, that although they had to cancel and reschedule, their ability to put belief in such a great event was proof that society would overcome the pandemic that has interfered with our lives.