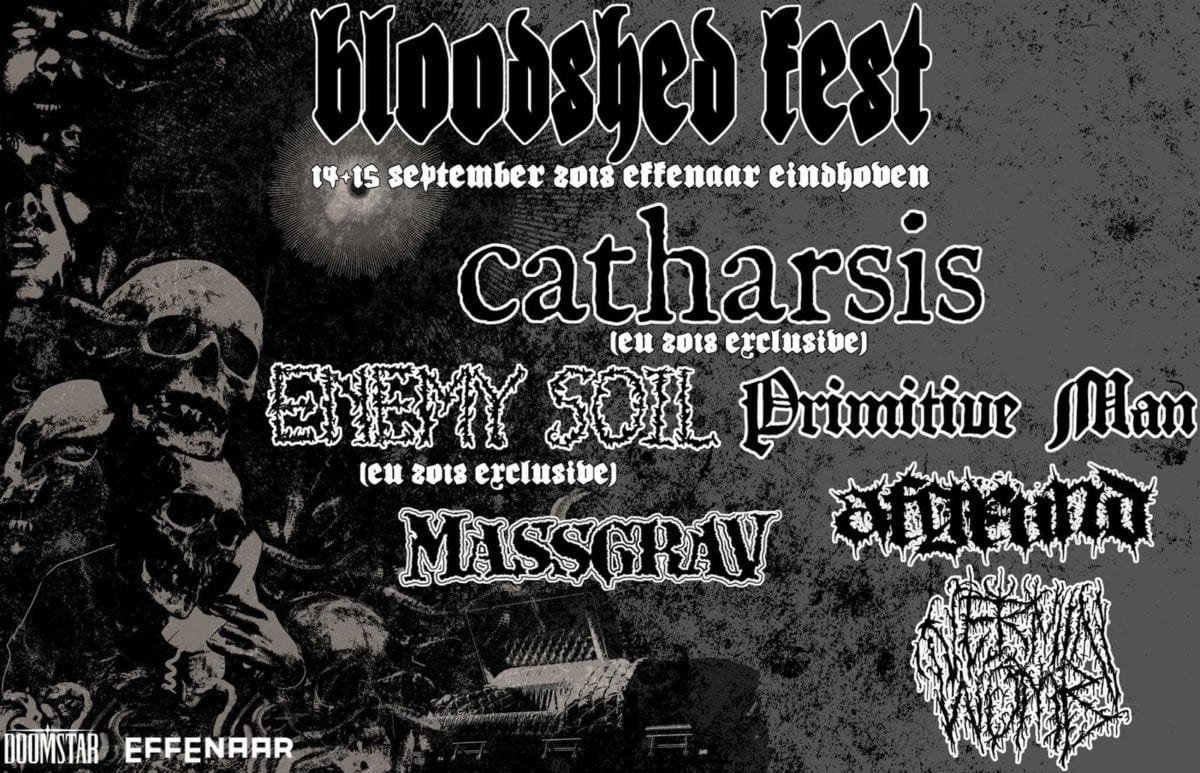 A word from the Bloodshed 2018 organisers:

Dear friends and family, slowly but surely we have recovered from what was our first sold out edition of Bloodshed Fest, which was by far the best one we did. It made us rethink about why and how we do the festival, which lead to us reprofiling the festival altogether and set for a new course, holding in mind past, present and future. With this proces, change is bound to happen. Hence we are proud to announce a new location, new dates, and the first 6 names for the 19th edition of Bloodshed Fest!

Firstly the new location, we haven chosen for the prestigious Effenaar venue in Eindhoven to facilitate our festival, some of the staff are long-time Bloodshed Fest enthusiasts and the venue is more than equipped to service our fest and its visitors. A humble bow and giant thank you to the people of Dynamo for hosting us for the past 11 editions, without your help we could not have made it this far! We look forward to our new cooperation and welcome you all back, on September 14/15! That’s right, we moved the fest back about a month from the usual period, hopefully it makes for a slightly sunnier festival! Presales have already begun so secure your visit to some Bloodshed!

Then on to the most important and hardest part, the first names! It is with great pride and honour we can announce not one but two European exclusive performances! The first being the recently reformed Enemy Soil from USA, the group that helped spawn acts such as Pig Destroyer, Agoraphobic Nosebleed and Drugs Of Faith has announced they will reunite for a few select performances and this wil be the only European one for 2018! Secondly, anarcho-punks Catharsis from USA will return to Europe after their 2013 mainland and 2014 Scandinavian runs for one exclusive performance at Bloodshed Fest!

But there is much more awesomenness to share, we can continue with the heaviest band of the bill (so far); the sludge goliaths of Primitive Man who blew everyone out of the water with their recent Caustic record! We are joyed that we also have booked PM’s Ethan McCarthy’s (who also designed the killer new poster) grindcore band Vermin Womb on the bill for more crushing heaviness! Furthermore the Finnish grindmasters of Afgrund (the real one) and Swedish fastcore heroes of Massgrav will bring you a healthy dose of blastbeats. Off to a great start we’d say, and there is so much more to come! Next announcement will be done in January, so stay tuned and keep checking back on our facebook pages!