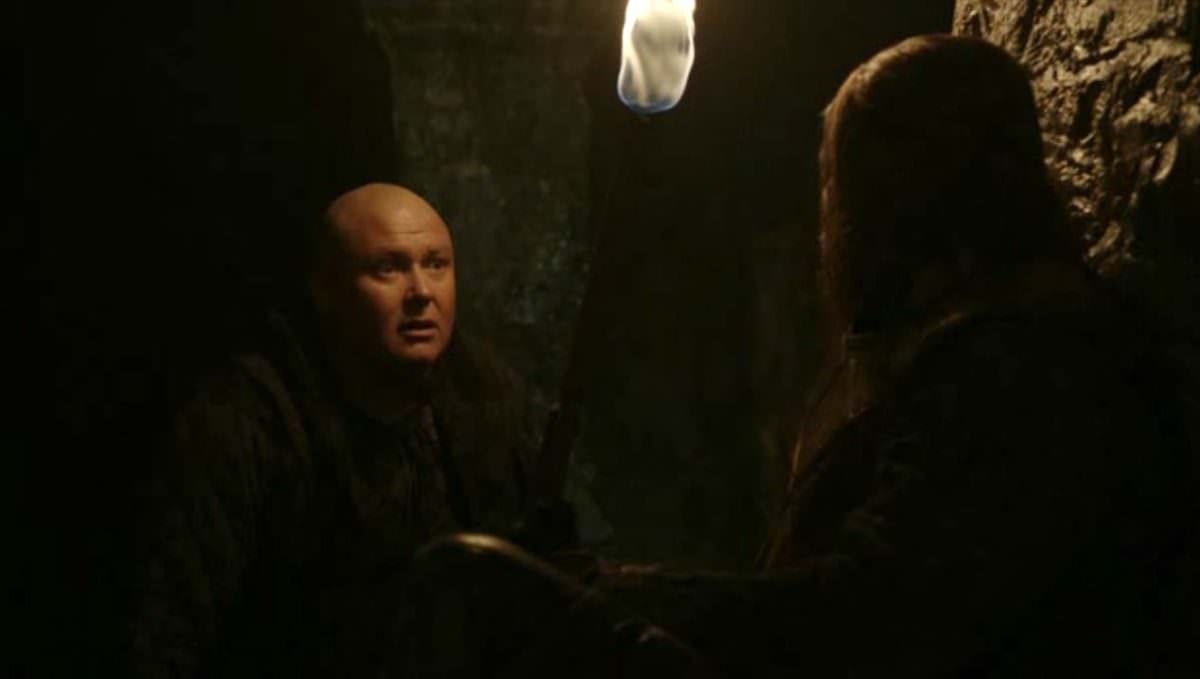 The last season of Game of Thrones will begin in Australia on Monday, July 17th. Albeit, the season will be split into two and probably wrap in 2019. However, we are beginning the final leg of what has been a remarkable television journey. To celebrate, we thought we’d cast a look back to ten of our favourite moments from the show in the lead up to the season premiere.

“I want you to serve the realm!” said Varys (Conleth Hill), in a dungeon beneath King’s Landing to a chained Ned Stark (Sean Bean) before his execution. It was a quiet prelude to the first of many iconic “WTF” moments that Games of Thrones have given us. There are many more things going on in this scene from the ninth episode Baelor of Season 1. The audience at this point had learned not to trust the words of Varys, the spymaster who played in the shadows of the political intrigue at King’s Landing. Looking back six years later, every word that the eunuch said to Ned was completely true – an unconventional hero appealing to a more traditional one to change his ways.

There is a battle of philosophies here that will repeat over the length of the series: Ned is an honourable man who lives by a code, and someone who has seen victory due to his physical attributes as a soldier. It is these very things that will seal his fate. Varys is looking at the long game and thinking of not just lords, but the commoners of which he was one. Varys has seen much cruelty in the world as Ned has seen war. Both want to do the right thing and avoid another war, but Ned has a code to live by. Varys, being ever the political player, leaves with the line he knows will convince Ned to change his mind by appealing to his identity as a father. It is interesting to note that back in Season 1, the Stark girls were the most at risk and closest to death, and yet they, along with the bastard Jon Snow (who coincidentally did die), are the only ones left standing (sorry, Bran) as Season 7 starts.

By the way, this closing line appealing to Ned worked a treat. Ned took the black and went to the wall. The two Stark girls returned home and Robb Stark tore down his banners and war was avoided for another generation of peace and prosperity. Or, at least that would have completely been the case if not for the wanton cruelty and unpredictability of this new generation of young boys who live by no code. The beheading of Ned by King Joffrey (Jack Gleeson) ultimately sets the course for the ensuing chaos, but if not for this, Vary’s plan would have worked! While the series likes to play up how certain characters succeed because of their lack of honour, Joffrey’s choice here is also a clear example of the writers of how, when you turn your back on codes and traditions, it can also lead to your downfall.

Varys’ doppelganger and the main rival, of course, is Petyr Baelish, or “Littlefinger” (Aidan Gillen), who is just as good a spymaster as Varys, but has more selfish motives. It is also worth noting that in the more cunning Tyrion Lannister (Peter Dinklage), Varys found the partner he wanted in Ned, and together they saved King’s Landing from destruction in Season 2. Maybe that is why Varys throws his lot in with Tyrion and helps him escape later in the show. Ever since Varys has left that place, King’s Landing has been in chaos (partly, of course, attributable to the loss of Tywin Lannister [Charles Dance]). Why Varys was so valuable to the court, and why he is one of the show’s great heroes, is all here in this small moment in a dungeon before the impending storm. It will be interesting to see how the Master of Whisperers’ fate plays out in the coming season.