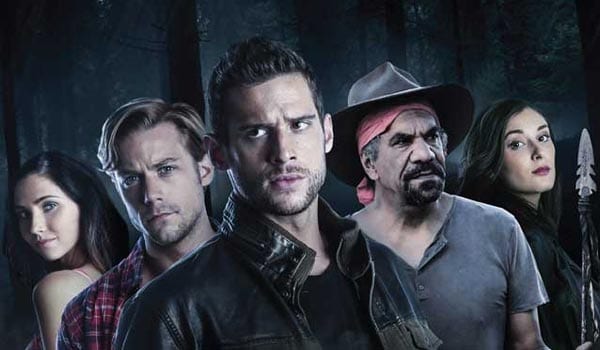 We’ve had many good Aussie horror films over the years, but very few have actually embraced Australian culture the way that Red Billabong does. I’m not talking about beer drinking (although there is some of that in the film). I’m talking about ancient Aboriginal culture and folklore, and that is what sets Red Billabong apart from some of the other Aussie horror/action films that we have seen over the years.

The film centres around two brothers. Farmer Tristan (Tim Pocock – X-Men Origins: Wolverine) who has stayed and worked on the farm since his grandfather’s death and Nick (Dan Ewing – Home & Away) who left the farm years earlier with no explanation. Now years later Nick returns as Tristan looks set to sell the farm to a developer named Mr. Richards (Felix Williamson – Gods Of Egypt) instead of passing it back to the traditional Aboriginal landowners like their Grandfather wanted.

Just to cause even more tension, Nick learns that Tristan is selling drugs for no-hoper BJ (Ben Chisholm – The Hollowmen) who turns up for a weekend of partying with a group that includes Nick’s ex-girlfriend Anya (Sophie Don – Yesterday Is History) and party girl Rebecca (Jessica Green – Pirates of The Caribbean) who takes a liking for Tristan.

Some critics have unfairly savaged Red Billabong… something that I consider a crime in itself because this is one horror film that has a lot of merit and dares to be a little different. The fact that this film embraces the fact that it is Australia that wins you over from the get-go. It consists of a soundtrack made up of Aussie classics and the characters are so Australian you could be forgiven for thinking that they might be your next door neighbours. The fact that the characters are so natural and likable (although you will hate BJ from the start… but you need that kind of character in every film) means that you instantly care what happens to them… and that is something that some Australian films forget that you need.

What makes Red Billabong such a good film though is something that I can’t go into explaining too much about though and that is the twists and turns that make up the film’s plot. Director/screenwriter Luke Sparke (Yesterday Is History) makes sure that this doesn’t become just another monster horror by incorporating a very interesting and suspenseful storyline that keeps you on the edge of your seat throughout. The monster itself, which comes from the Aboriginal myth of the bunyip, is also very well done and the CG team behind the film need to be congratulated.

The film also allows its young cast to shine a little. Both Tim Pocock and Dan Ewing show that they have enough skills to be leading men in many feature films to come while Sophie Don and Jessica Green also do great jobs. Green especially so as Sparke has given her a role that turns your typical horror damsel in distress role on its head.

This is one horror/action film that is really worth a look. It may be low budget but it certainly isn’t cheap and nasty, and fans of the monster horror genre are going to want to see this monster. A good fun film that keeps you guessing throughout.