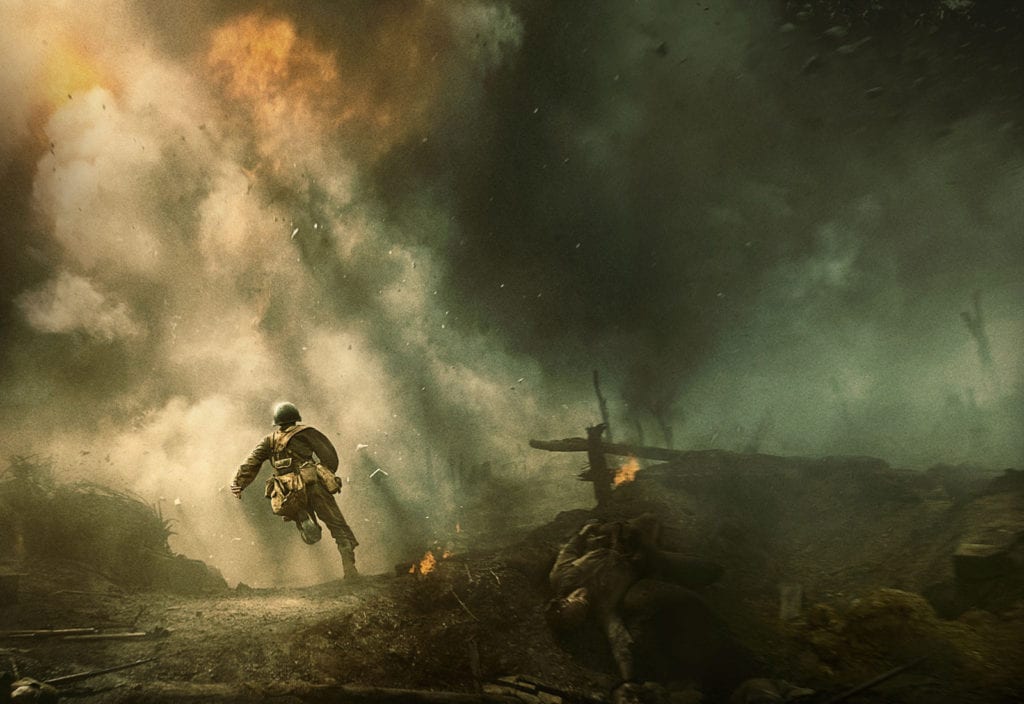 In the past when a film critic has wanted to highlight the fact that a war film has been brilliantly shot they would compare the film to Saving Private Ryan and that amazing sequence of the troops storming the beach. Well from now on those same critics will be comparing any future great war films to Hacksaw Ridge, because as a filmmaker Mel Gibson (The Passion Of The Christ) has made Hacksaw one of the finest war films to ever be made.

Based on the true story of Desmond T. Doss (Andrew Garfield – The Amazing Spider-Man), America’s first Conscientious Objector to be awarded a Medal of Honor, Hacksaw Ridge follows Doss’ story from his early days having to live with an alcoholic, abusive father (Hugo Weaving – V For Vendetta) who has never fully recovered from the horrors that he experienced during World War I, his romance with the beautiful Dorothy (Teresa Palmer – Warm Bodies) right through Doss’ training under a strict superior, Sergeant Howell (Vince Vaughn – Wedding Crashers) through to his heroics on the battlefield.

It has been no secret that Mel Gibson has been on the outer with Hollywood for the better period of a decade now. Normally when an actor or director commits a faux pas like Mel’s it’s forgotten about in a year or two… not so the case with Mel. Not even great performances in films like Get The Gringo or Blood Father could get him back into the good books… but what could a potential Best Director’s Oscar or Best Film Oscar do for him?

There is no blunter way to put it but Hacksaw Ridge is a brilliant film. Gibson handles everything perfectly with this film – he allows a romantic story to come into play without over-doing it like Michael Bay did with Pearl Harbor, handles court room scenes in the same amazing way that Bruce Beresford did with the legendary Breaker Morant and then caps all that off with some of the most spectacular war scenes ever put onto the big screen. Teaming up with cinematographer Simon Duggan (The Great Gatsby) Gibson manages to capture the horror of war in a way very few filmmakers have done in the past. As Doss finds himself in the middle of a brutal battle where the shelling is constant and as the body parts fly you find yourself almost able to smell and taste the smoke as you sit in your comfortable cinema chair.

The other major thing that surprises you as an audience while you watch Hacksaw Ridge are the performances that Gibson manages to get out of the cast. You go into this film expecting brilliant performances from the likes of Hugo Weaving and Rachel Griffiths (Six Feet Under) but you don’t expect for actors like Andrew Garfield and Vince Vaughn to be putting in performances that you suspect may see them gain a swag of award nominations. Garfield really steps up and shows the acting world that he is capable of doing more than the super-hero roles he has done in the past while Vince Vaughn makes you forget every bad comedy he has made over the last decade with a truly amazing performance in a serious role.

Mel Gibson’s return to the director’s chair after ten years of absence is a victorious one. While many may try to put down the brilliance of Hacksaw Ridge due to Mel’s past sins this is a film that deserves to dominate the AACTA awards and is more than likely going to pick up a few Oscars along the way as well. The buzz is not over-hype Hacksaw Ridge is one of the best films of 2016.