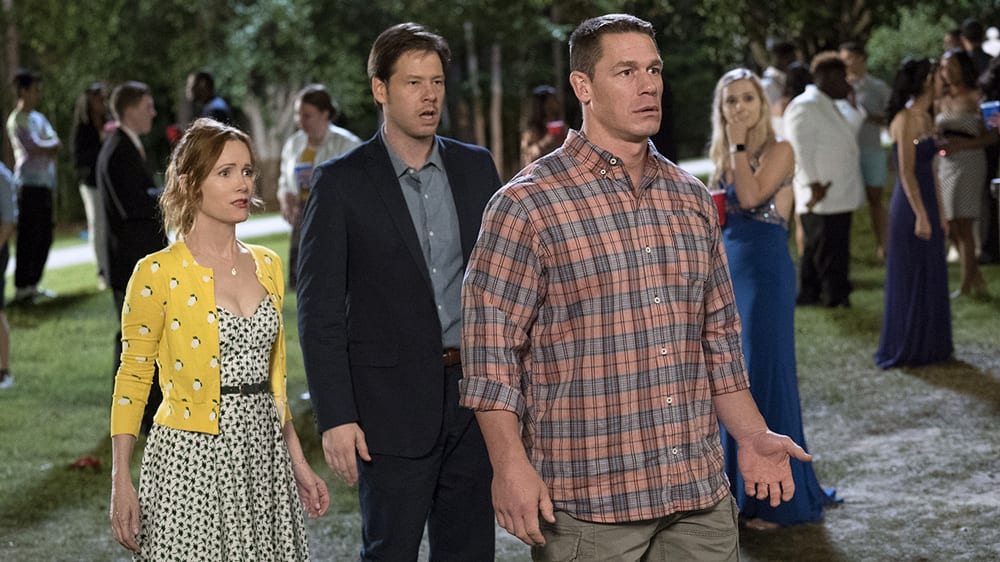 The world of R-Rated comedy has had some great new additions of the past few years –Trainwreck, Horrible Bosses and We’re The Millers just to name a few have made sure that the genre has been kept alive despite some average attempts as well. Now comes Blockers a film that on the surface looks like an adult answer to American Pie but on further investigation is an hilarious comedy that makes you laugh, but is intelligent enough to make you think as well.

The parents have friendships have dwindled over the years. Lisa and Mitchell still see each other but aren’t as close as they used to be and they have pretty much written off Hunter who is virtually none existent in his daughter’s eyes now. The three parents are now forced to team up though when they learn that the daughters are planning on losing their virginity on Prom night… something the parents think shouldn’t happen

Blockers is a much better film than a lot of critics will be brave enough to admit. Yes the film does contain comedic moments that involves John Cena touching another man’s junk… but you know what, when that moment gets as many laughs as it did at the Melbourne premiere then it is pretty safe to say that the writing team of Jim Kehoe (Overachievers, Duress) and Brian Kehoe (The Comments, Voicemail) alongside director Kay Cannon (first time director) know their audience and nail it.

What most people won’t tell you though is about the fact that Blockers does in fact also have a deep, thoughtful side. This is more than a story simply about three parents doing all they can to stop their daughters from having sex this is a story that explores the notion of how a young girl tells her friends and her friends that she is a gay, a story about a father who is trying to find redemption from his family and friends for something that they believe he has done, and above all it is a story that explores the notion of when is the right time for parents to start letting their children make decisions for themselves. They are all pretty deep topics and the film looks at them remarkably well… the fact that the outrageous comedy throughout the film works so well is almost just like an added bonus.

What we can also take from Blockers is how amazingly the cast does. Leslie Mann is on song while Ike Barinholtz steals the show with his witty one-liners, many of which you feel were probably ad-libbed… they work and at times you can see that they have taken his co-stars by complete surprise. Perhaps the biggest surprise here though is the comedic acting work of John Cena. Sure the former wrestler was good in films like Daddy’s Home 2 and Trainwreck but here Cena takes his comedy to a whole different level. You would easily expect that he would be over-awed having to deliver comedy alongside seasoned veterans Mann and Barinholtz but Cena not only holds his own alongside he occasionally body-slams them out of the way as the takes the laughs from them.

The three main stars are also well supported by their younger co-stars. Aussie Geraldine Viswanathan really announces herself on the international stage while Gideon Adlon takes her complex storyline and really uses it to enhance her screen time…. she is another who announces herself as somebody to watch in the future.

As an audience member I must say that I was pleasantly surprised by the more serious side of Blockers, in fact to be completely honest the whole film surprised me. While I was expecting the odd chuckle here and there what I ended up with was moments of true laughter throughout while the more touching side of the film also spoke to me. This is one surprise right of the bag and may well earn itself the title of the funniest film of the film.