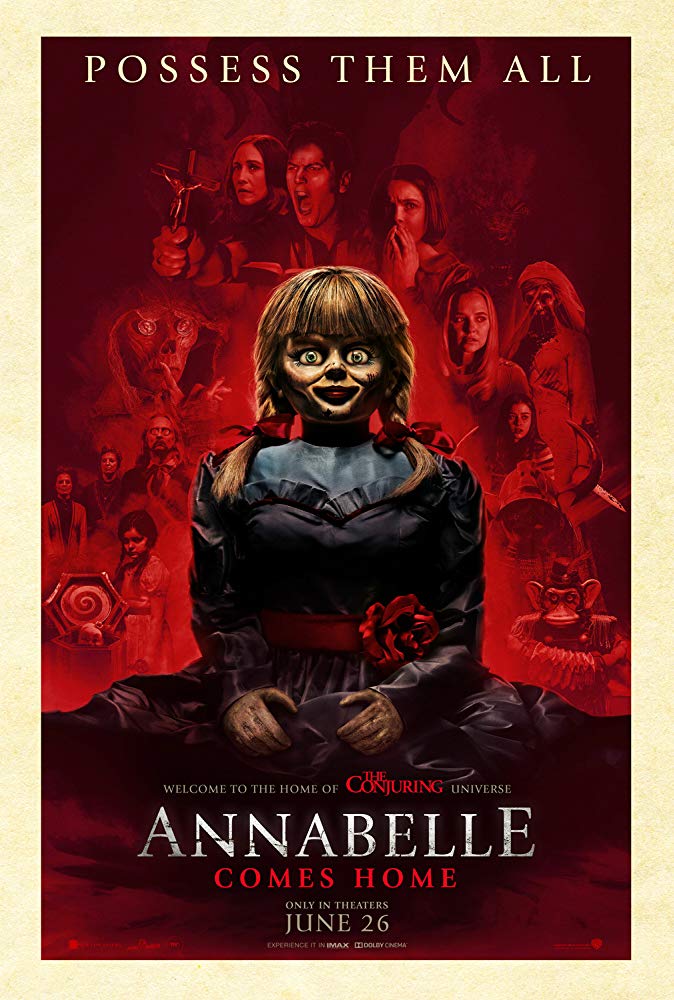 You just can’t beat old school horror. Yes I will admit that I have sat in a dark cinema and marvelled at how special effects have changed over the years, but I still have a special place in my heart for a filmmaking team that is willing to go old school to achieve a lot of the affects that they are trying to portray on the big screen. That is certainly the case with Annabelle Comes Home, the latest film from The Conjuring universe.

It would be wrong to sit here and say that director/screenwriter Gary Dauberman (the screenwriter of It, The Nun) goes totally old school with the effects in this film but he does manage to create a good mix of special effects and in camera effects and the end result is a film that seems well above most Hollywood directional debuts these days.

Storywise Annabelle Comes Home tells the story of what happened when famous demonologists Ed (Patrick Wilson – Watchmen, Aquaman) and Lorraine Warren (Vera Farmiga – The Departed, Orphan) first brought home the evil conduit – Annabelle. At the same time the Warren’s demonology is being questioned in the papers which causes more problems for their daughter Judy (Mckenna Grace – Gifted, I Tonya). Suddenly nobody wants to come to her birthday and she is once again getting teased and ostracised by her classmates.

With the Warrens going away for the night the kind-hearted babysitter Mary Ellen (Madison Iseman – Jumanji: Welcome To The Jungle, Goosebumps 2) decides that she wants to cheer up Judy and hold an early birthday for them. Mary Ellen’s best friend Daniela (Katie Sarife – Teen Spirit, Supernatural) then invites herself to the party determined to see inside the Warren’s house. Her curiosity though leads to disaster when she finds a way into the Warren’s forbidden room which houses the notorious Annabelle among other evils.

What Dauberman ends up creating is a well-rounded horror film which is made even more unique by its throwback to 1970s and 1980s horror. The period setting for the film works and only enhances the decision to shoot a lot of the horror in the film the old school way. Actually having actors with coins in their eyes scaring the characters actually adds to the suspense of the movie, while the special effects that involve the Wolfman etc also work remarkably well.

The thing that adds to the horror throughout the film though is the simpleness of it all. This is the old babysitter-does-the-wrong-thing-and-pays-for-it story and even in today’s cinema environment works remarkable well. It sounds weird to say it about a horror but it is the naturalness of the film that makes it work so much more. The simple setting and characters that are easy to like adds even further to the suspense of the film. In fact the latter point enhances the film so much that other writers/directors should take note. So many horror films that hit the cinemas these days suffer from the fact that you simply do not care whether the characters live or die, but here you instantly care for Judy, Mary Ellen, Daniela and the shy and reserved Bob (Michael Cimino – Training Day, Walk The Prank) and you don’t want to see any harm come to them.

The three female leads in this film have also been amazingly well cast. We have all known for awhile now that Mckenna Grace is destined for big things but the work here by Madison Iseman and Kate Sarife also shows that they have promising careers ahead of them as well. Sarife’s acting performance is enhanced by some great screenwriting by Dauberman. In a lot of horror films Sarife’s character of Daniela would be seen as the idiot who invokes the horror without any real reason given to her actions. Here though Dauberman has given the character Daniela a good storyline that easily explains her actions… it also goes to show why Dauberman is also a filmmaker that understands the genre and screenwriting in general.

Annabelle Comes Home is a worthy addition to The Conjuring universe. While it does little to expand what we already know about Annabelle as a ‘character’ it does show more of what she is capable of. Perhaps though the more exciting thing that is left with the audience after the film is that we have discovered another great horror filmmaker in Gary Dauberman.