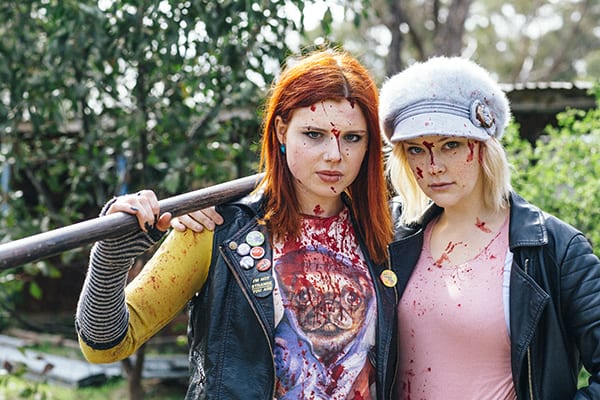 Strongman Pictures Entertainment have announced a release date of April 19 across Australia for their latest film, the sci-fi, splatstchtick, rock-‘n-rollin’-action-rampage SHEBORG MASSACRE on DVD & Bluray through Monster Pictures Australia.

When an alien fugitive crash lands into a local puppy farm and begins turning people into mutated robot killing machines with a taste for puppy flesh, Dylan (Whitney Duff), and Eddie (Daisy Masterman), two self-proclaimed political activists, are all that stand between the Earth and total domination. Forced into a ‘dare to be great’ situation that neither are prepared for, the two BFFL’s must fight their way past cops, city officials and cybernetic dog butchers in order to destroy the evil Sheborg and save the planet!

SHEBORG MASSACRE is Strongman Pictures third DIY feature, written and Directed by Daniel Armstrong (MURDERDROME – 2013, FROM PARTS UNKNOWN: FIGHT LIKE A GIRL – 2015). It premiered at Melbourne’s Lido Cinema in mid 2016 to a sold out crowd, and won Best Actress Awards for both of the stars, Whitney Duff and Daisy Masterman, as well as the Special Jury Award, from the Melbourne Underground Film Festival (2016).

According to the film’s writer and director, Daniel Armstrong, SHEBORG MASSCARE was inspired by his boyhood infatuation with B grade science fiction and horror movies on VHS.

SHEBORG MASSACRE will be released on DVD and Bluray across Australia on April 19 as part of Monster Pictures “Fatal Visions” label. 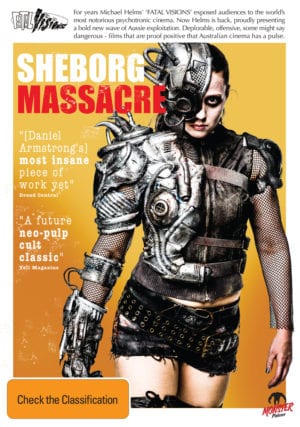