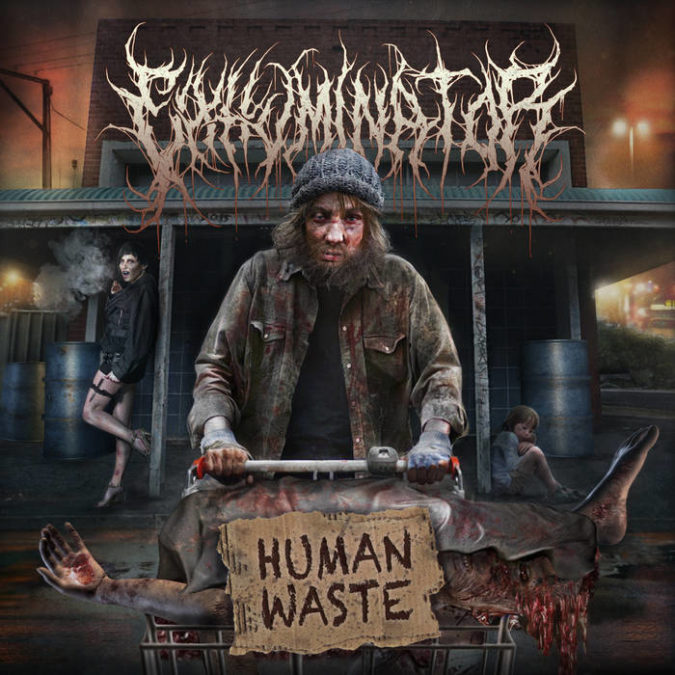 Well, here we are at last, staring at the arse end of 2021 whilst being buried beneath an avalanche of ‘Best of 2021’ lists. Best album, best song, best covid advice etc etc etc. So it is with great pleasure that I can announce the winner of this year’s award for Best Album Cover (insert drum roll here)….

Exhuminator for the album Human Waste!

A delightfully perverse throwback to a time when album covers were more than just a thumbnail pic pasted next to a playlist. Every track from the album is referenced in a demented Derek Riggs style amongst the artwork, from flesh hungry homeless trolley pushers to a delightfully detailed crackwhore. But best of all is where these degenerates are gathered, right out front of none other than the Snowtown* bank. Yup that bank, the bodies in the barrels bank and the subject of one of Australia’s more disturbing films. Which is saying something for a country that gave us Bad Boy Bubby and The Very Excellent Mr Dundee.

So that’s the visuals taken care of but what of the tunes within? The first track to spew forth is the aptly titled Barrel Of Laughs, and absolutely backs up the band’s claims of being “pure brutality”.

An opening riff, that won’t win any awards for originality but is still extremely effective here, plays through before being bludgeoned by the sound of crushing drums. Vocalist Ryan then enters the fray and completes the apocalyptic carnage with the kind of death growls this music demands.

This all plays through a few times before the growls are joined in the mix by a ‘startled vampire’ style screeching, nothing new, but again it is effective.

Crackwhore stomps into view, and by stomp I mean American History X curb stomp. Chugging chords, matching drums and more vocals from a larynx that must be housed in a neck that could be mistaken for a rhino’s thigh. The chorus drives home the track’s title and then takes a little time exploring some great fretwork from Kris Xenopoulos of Vulvodynia fame.

Flesh Hungry Homeless does nothing for this year’s Salvation Army blanket drive but does do a great job of harnessing the band’s explosive power. Public Execution maintains the relentless onslaught and gives drummer Jake Sproule the perfect platform to showcase his abilities. A great breakdown after the chorus leads into my favourite soundbite of 2021, “You’re gonna look pretty funny trying to eat corn on the cob….with no fucking teeth”. For a brief moment the song then fucks off in an altogether thrashier direction before closing out with a return to their stomping, brutal best.

Title track Human Waste is not going to become a morale officer’s ringtone anytime soon, and spends just under three minutes letting us all know that we shouldn’t be expecting a breather from the brutality anytime soon.

Moonlight is a great vehicle for the vocals as they shift from bowel loosening depths to aggressive barks right up to the startled Count Drac shrieks and back again (seriously the budget for this album must have primarily been spent on strepsils) as the band delivers a righteously cacophonous backdrop.

However, Scorched Earth is perhaps where the limitations of the genre rather than the band begins to show. Everything this track has to offer has been heard on the previous songs. Heavy for heavy’s sake has its place, and Scorched Earth certainly deserves a spot here.

Whereas Murderer blends the best of the band’s down tuned death savagery with its intermittent thrash tendencies and stamps itself as a standout because of it.

Vermin suffers similarly to Scorched Earth but is saved midway through by some unbelievably impressive Igor Cavalera inspired drumming. And what better way is there to end any album from 2021 than by screaming ‘motherfuckaaaaaaargh’?

Exhuminator may not be about to appear on any end of year lists when it comes to originality, but then again, really who would? And it probably won’t attract fans outside those that devour brutal death metal on a daily basis.

But for those that do, this is the album for you.

*On the year of its release, Snowtown won the Academy Award for Worst Date Movie Ever.