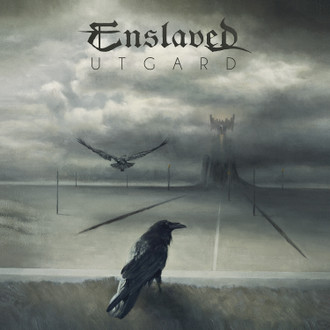 With a career that has been forged over twenty five years, Norwegian progressive post-black metallers Enslaved have very little to prove to either themselves or their fans both old and new. Fifteen albums in, each new artistic journey sees the Enslaved collective breathe on old embers of inspiration and forge monstrous musical experiences from the flames born anew.

2020’s Utgard is a strange, wondrous journey that raises the eclectic, dark and heavy bar for these already inspiring and revered Norwegians in terms of how wondrously they have interwoven every single influence into the realm of the album in just 9 songs coming in at just over forty five minutes.

Opening with a dark baritone choral chant, followed by a quick acoustic backing “Fires In The Dark” then leaps into an avant-garde heavy driven, drone laden opus with a deep-seated folk heritage. Throughout the song, it is the vocals that are the main focus points with the music taking the listener on the journey. Heavy growls tag-teaming with the deep voices and subtle calming vocals twisting and turning with the eclectic expert musical craftsmanship of Enslaved make for quite the experience and a magnificent starting point for the rest of the album. “Jettegryta” is an apocalyptic Norseman’s ride through the chilling cold landscape of bleakness as black metal can be for half the song. Typical early black metal, sullen frost encrusted magnificence, when at the three-minute mark Enslaved slam on the handbrake, chuck a full 180° turn and for a brief crazy moment launch into some jazz fusion breakdown that at the initial listen appears to have no place anywhere near black metal but it somehow detracts from the song, making it somehow stronger because of it out of place-ness!

“Sequence” appears at the outset to be a straight-up 4/4 driven but it is so SO far from that. Of course, it is! We’ve already heard and experienced the two openers that anything from there on in on Utgard that is out of the ordinary is purposely there to keep both the band and the listeners alert at all times for fear of falling into the flames of monotony.

No amount of attempting to try and tie Enslaved down to any one particular style or category will suffice or do them any justice in 2020. They have clearly outgrown their former selves and forefathers of extreme metal, yet having said that track four “Homebound” is start to finish, a great metal track, no surprises or quirky interludes. Which actually makes it a stand out so far on the album due to its singular focus and impact, plus the sensational vocal trade-off between Iver Sandøy (drums and clean vocals) and Grutle Kjellson (bass and heavy vox).

It’s here, halfway through the album that it is evident of the height of talent that founding members and songwriters Ivar Bjørnson (guitars/backing vocals) and Kjellson have garnered through working and writing with their current lineup of Enslaved. Each note no matter how well placed or off-kilter is ceremoniously placed upon a pedestal to be revered. Making Utgard quite the album.

The highlight for me is track six, “Urjotun”. It is a Kraftwerk, kind of post-goth, synth inspired piece that bleeds dark electro and it fucking rules. Again with the dichotomy of harmonious vocals pushing against guttural black growls – both in sync with the dark deep avant-garde malevolence as a whole – engineers a unifying connectivity that is rare to find, I can only think of bands like Arcturus, The Antichrist Imperium, Akercocke and their ilk that can write, record and perform this kind of discordance, get away with it and have in sound beautiful in its jarring nature.

Which is pretty much the entire substance of Enslaved’s latest album – Utgard. Whilst it certainly does not stand out in a pack of other bands strolling down the path of not wanting to sound like anyone else at the same time trying to outdo one another progressive-ness and musical brilliance, Utgard is a remarkable and truly satisfying album from a metal band that are anything but simply a metal band. Enslaved have released an honest monumental beast of an album in 2020 and for that they should be praised.

Enslaved’s – Utgard is out September 25th via Nuclear Blast