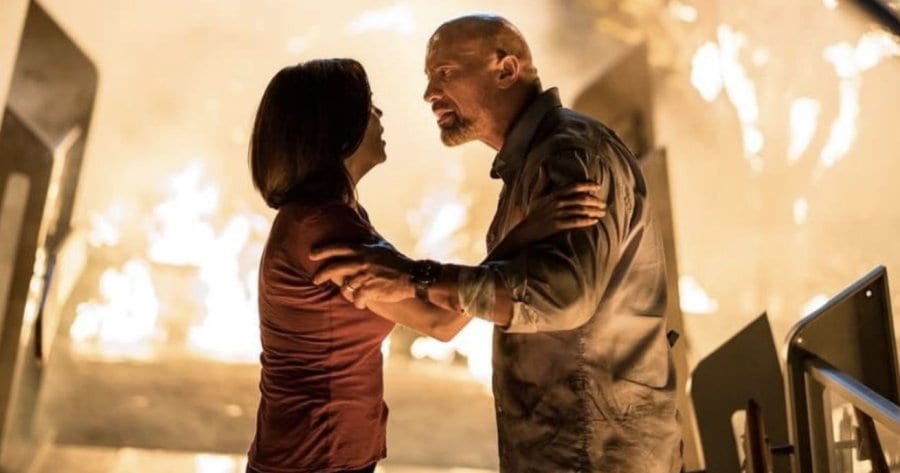 It seems like it was only yesterday that Dwayne ‘The Rock’ Johnson was battling giant creatures in Rampage (well it was if you just bought the Blu-Ray) but now he is back in cinemas doing what he does best and kicking ass in the big action thriller ‘Skyscraper’.

Actually to be fair he is doing more than that and just like San Andreas this film gets to see Johnson take on a more personal role – here he is a flawed characters with vulnerabilities, or more simply a Dad trying to save his family from disaster. Also along for the ride this time playing his wife his Neve Campbell, no stranger if you have been a fan of the Scream franchise over the years.

Johnson says one of his biggest challenges of playing former FBI Agent Will Sawyer was playing a character who is an amputee. “There were a lot of things that I had to keep in mind as an amputee. I had to be thinking about that every second of every frame of every action in every moment. I had to think what does that look like, psychologically how would that feel. I had to learn how to walk that way because there is a certain hitch in my steps, a certain gate in my hips. They are all things that an amputee will go through. At the end of the day we wanted to make a movie that was about a man who around every corner and in every scenario in this movie was barely surviving and I mean barely surviving but every inch of his soul, his fibre, his constitution, his DNA just won’t let me quit. IT just won’t let him stop it just makes him keep going and going and going.”

The other character trait that really stands out for Sawyer is the fact that he is a family man and that also really stood out for Johnson as well. “The bond that my character Will has with his wife Sarah is a very strong bond,” he explains. “They were bonded by an extreme circumstance that takes place at the start of the movie and they become married and they have children and they are very happy, much like a lot of these relationships that a lot of relationships and a lot of marriages out there are like – it does go through its ups and downs but at its core there is something special and also at its core there is the one who leans on the other and then the other leans on the other one. And in this case I found myself really amazed that Neve plays a wife that I could really lean on. This film also looks at the bond of family because regardless of race, culture, class or religion the ideology of family and the bond of a family everyone relates to. I think there is something very visceral about a family being torn about and the parents doing everything they can to protect their family from being ripped apart – they are protecting their young.”

Fans of the action genre are always keen to see Johnson may have to face when it comes to fight sequences in his film, and while topping his fight with Vin Diesel in the Fast & The Furious franchise was always going to be tough Skyscraper sees him in a more than worthy scrap with actor Pablo Schreiber. “I really enjoyed fighting with Pablo who is just a fantastic actor,” says Johnson with a smile. “When I first heard that Pablo was being cast in the role I thought great I love him as an actor – then I see him and meet him for the first time and I realised this guy is a big bastard – this guy is BIG and I mean BIG. It is not very often that I have to look up to guys but I ahve to look up at Pablo and that immediately informed me to what kind of fight this was going to be – he puts my head through a TV, he takes my leg off, he kicks me and puts me through a wall.”

Playing the equally tough Sarah Sawyer, an ex Navy surgeon who can more than handle her own is Neve Campbell and she says she was excited to do the project from the moment she read the first script. “The script was really exciting, it was one of those scripts where I couldn’t stop turning the pages… I just had to know what happened at the end, and I felt that really engaged even though it was action film I think sometimes films in this genre can be difficult to engage with the characters but I thought the characters were fully formed and really fleshed out. I found that I cared about them and the character of Sarah that I was lucky enough to be cast into is  strong, she is a really strong woman, she is a fighter, she is a really great mother and she’s got will power and she has a really loving, honest relationship with her husband. It is a very beautiful family unit.”

The other thing to attracted Campbell to the role was getting to play a strong female character that other women could look up to. “Sarah is an intelligent woman, she is a wonderful mother,” she says. “She was a naval surgeon, so she obviously has some physical combat experience and training so it makes sense that she is strong as she is in the film. She is also very much mother lion who is saving her cubs, that is very important because as long as we believe the fear and believe the tragedy that is coming towards them then we believe the desperate need for them to save their family and we will go along with it and enjoy it. As a woman it is nice to portray a character that young women or young girls can look at and say “hey I can be strong, I don’t have to be the victim. “I was a dancer so I have always been physical my whole life, so for me to do stunt work is a lot of fun because it is choreography. In a lot of ways it is very similar to dancing so it was a lot of fun, so it was good to kick ass a bit and be a strong female character who is able to take care of her own.

And of course Campbell also enjoyed working with everybody’s favourite giant – Johnson. “I think that is what is going to be new for audiences with this film, with Dwayne in this film, usually he plays much larger than life characters, well he is larger than life in a lot of ways, but obviously people like seeing him like that, but this time you get to see something else wonderful about Dwayne his vulnerability, his character has flaws and he is not a superhero and he struggles and we don’t get to see Dwayne do that a lot and I think the audience is going to be surprised at just how well he can do that. I had only just done the screen test with Dwayne I had never met him before that, we got on really, really well in the screen test, I had a hoot, he is very funny and very professional so he has really good instincts so it was great to pay off that with him… I think we have a good energy… he’s just a good guy.”

Skyscraper is in cinemas now.