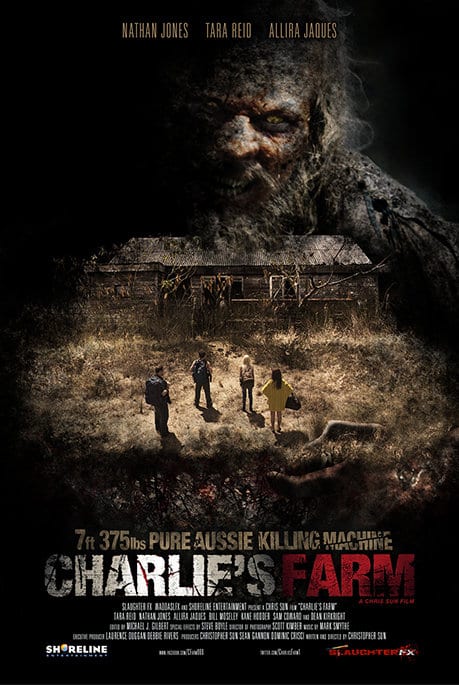 A lot of people seem to love being able to stick their boot into the Australian film industry at the moment. They can say what they will, but it hasn’t prevented Australia from making some pretty decent films over the years. One of the genres that Australian filmmakers have excelled at over the years has been the horror genre. From the Ozploitation films of the 1970’s and 1980’s through to more modern day films like the underrated Cut that actually became a successful film in Europe, even the team behind the popular Saw franchise and all of its off-shoots also hail from Down Under.

One Australian genre director who has really been somebody to watch over the past few years has been writer/director/producer Chris Sun whose first two feature films, Daddy’s Little Girl and Come And Get Me, had many people labelling him as the next-big-thing. Given that he has also built up one of the best horror effects companies in the world (not just Australia), it was easy to see why it was only a matter of time before he created an absolute horror gem. That may have just arrived with Charlie’s Farm, a film that is going to be lapped up by those who have enjoyed films like Storm Warning. It once again reminds horror fans right around the world just how nasty Australian horror can be.

As a film itself, Charlie’s Farm doesn’t bring much new to the genre. It is your standard slash, impale, crush and whatever style of horror, but it is the fact that the film seems to elevate itself into the higher realm of this genre alongside the films of Rob Zombie that should have fans of Australian cinema very excited. This is a return to good old-fashioned horror that has audiences hollering in the cinema, and you know it’s going to be lapped up by those that enjoy their horror on the hardcore side.

One of the most impressive things about Charlie’s Farm is that Chris Sun has built up such a reputation in the horror genre that he has been able to build up an absolutely top-notch horror cast. Alongside gifted locals like Dean Kirkright (who shows enough to suggest he has big things ahead of him), Allira Jaques (who is becoming Australia’s next scream-queen) and Sam Coward (who provides great comedic relief), Sun has been able to assemble a cast that also consists of Rob Zombie’s go-to man, Bill Moseley, Sharknado’s scream-queen Tara Reid, and horror legend Kane Hodder… better known as the man behind the Jason mask in the Friday The 13th franchise. Sun has also uncovered another star in former Aussie muscleman, Nathan Jones who brings a presence to this film like Kane did to See No Evil. His physical appearance alone on screen is frightening, and it won’t be too long before overseas horror directors are lining up to get this guy in their films.

Charlie’s Farm may not bring anything new to the horror table, but its brute force is enough to make sure that this is a horror film that is certainly going to be noticed. Some of the dialogue may not be great, but seriously, would anybody be expecting Shakespeare from this film? The film does, however, possess a load of suspense and the kind of slash-gore that true fans of the genre are only too happy to cheer along to. This is one horror film that ticks all the boxes that you are going to be looking for in the genre.