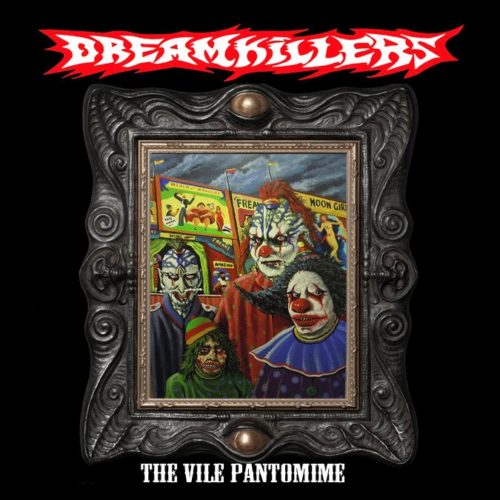 Some of my earliest and finest musical memories were created by Brisbane’s Dreamkillers.

So much so that my first ever live experience was a show they put on at the infamous Roxy nightclub back when I was at an age when I should have been tucked between the sheets, not drinking in a live music establishment.

That was some 30 years ago and to this day I still rate Dreamkillers among my favourite bands – certainly one of the bands who were impressionable on a young, budding metalhead.

I still vividly remember midgets dancing on stage as frontman Les Jobson spewed fire from his mouth while naked except for lashings of gaff tape that covered his private areas. To this day Dreamkillers are in my top 5 live shows ever.

Despite putting out fewer albums as the years add up, every Dreamkillers release is met with expectation and awe, a testament not only to the great legacy of the band but also tribute to the fact they are still delivering the goods three decades later.

Their latest EP The Vile Pantomine is no exception, a collection of five songs in the traditional Dreamkillers mould that are dripping with the venomous intent that emanates from every word sung or spoken by Jobson.

Opener “Battle of Brisbane Part 1” starts with an air raid siren before machine gun-like drums break the piercing wail and as the guitars kick in you can almost feel Jobson prancing the stage, a stoic look of intent smeared across his face while he awaits his cue. When his vocals finally kick in it feels as though all is good again in the world. The Dreamkillers are back and sound just as relevant as ever.

“Bennies” begins with an old school punk/metal/rock vibe that is classic Dreamkillers. Jobson has that rare ability to tell a story with minimal use of vocabulary, which he employs here, yet every word seems measured and deliberate as though trying to take you to the crux of the matter in as direct a route possible.

Over the years Jobson has never shied away from his beliefs – often drawing criticism in some circles because of it – but much to the man’s credit he has never once shied from controversy or retracted his beliefs in the name of acceptance.

“Strawberry Needles” tells a story that while may not be not familiar to everyone, certainly needs to be verbalized. The Dreamkillers have long held the belief that no crime should go unpunished, no matter how menial it may seem, and once again Jobson’s finds a worthy target to publically call out through verse.

Is By Fiend” is my standout track on the EP, starting with the tranquil sounds of running water before a voice-over lures the listener into a darkly foreboding tale that builds slowly without ever boiling over into the frenetic material which Dreamkillers are better known for. Jobson asks questions that need no answers and doesn’t always provide a solution, but that is the point.

Dreamkillers have always had an opinion that they are unafraid to share, but they have also understood that their views are not necessarily those of the masses.

Finishing with the instrumental “Battle of Brisbane Part 2”, the song almost feels like a bookend in accompaniment with Part 1 but one which begs for further investigation.

The Vile Pantomine may not break significant ground musically but doesn’t have to. It is unmistakably Dreamkillers and infinitely better for it. The press release for the EP calls it Dreamkillers latest and last EP and if that can be taken as gospel it is a sad day indeed in Australian music.

Dreamkillers are, and will always be, one of the finest and most innovative metal bands to come out of this country and if this is their lasting legacy then it is a fitting finale.

Thank you Les Jobson and every other musician that has played with Dreamkillers over the years. Australian music salutes you.