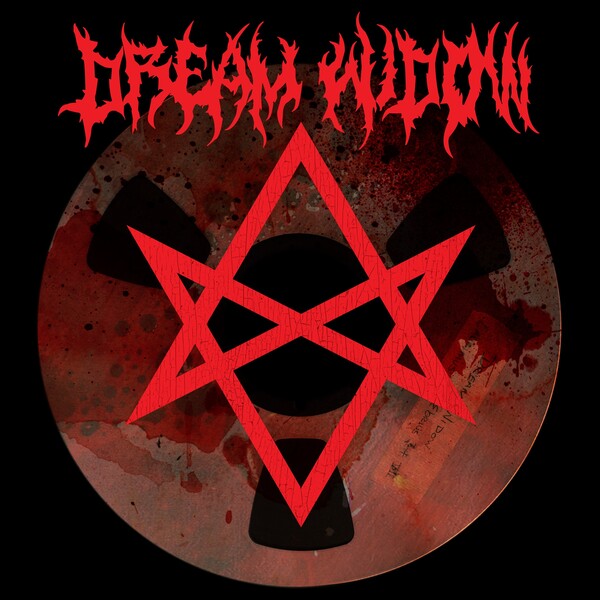 When I got the last-minute call-up to throw in a quick review of some work by Dave Grohl, I was expecting to get my hands on the latest dad rock newy from the Fooeys.

Fuck me, was I in for a shock. What I received was a filthy looking death metal CD with artwork containing a biohazard symbol (possibly a tape real), some weird 6-point star, blood stains, and a classic “pile of sticks” metal logo. This release goes by the name of “Self-Titled” which I guess technically means it’s called Dream Widow.

DaFuq is Dream Widow you ask? Well, back to Dave again, it’s some kind of metal solo project which he’s decided to throw into the unsuspecting airwaves. Knowing Dave, this will probably make it onto the mainstream airwaves too, and to great acclaim, just like everything else he’s touched since Nirvana.

As it turns out, Dave is responsible for all of the Drums, Bass, Guitar & Vocals on the album. He does get a little bit of help from Oliver Roman, and Rami Jaffee on keys, as well as the odd bit of guitar lead work from Jim Rota. Anyways, enough about the muso’s, let have a listen to the actual music.

Opening track Encino blasted straight in and ripped my fucking head off. The track listing warns us of explicit lyrics, but I’m fucked if I can understand what Dave is saying in his grind core style ramblings. Think King Parrot and then add in a Slayer interlude.

Cold brings down the tempo a little as the song chugs along at a steady pace. I can’t quite put my finger on what this reminds me of, possibly Type O Negative or something of a similar dark, industrial feel. It does have a slightly more modern doom feel to it though, and the pre-chorus adds a weird Nu-Metal twist to proceedings.

Next up is March of the Insane, which rings true to its name as a classic early thrash track. I’m sure I’ve heard all of these riffs before, but who cares, they do the job they’ve clearly been put here to do. A killer solo livens the track up a bit before the song thrashes its way out to an intense demise.

The Sweet Abyss kicks off with some modern-sounding metal riffing, and as the verses kick in, a surprising vocal attack and effect mix give the track a very familiar-sounding grunge overtone. The chorus then adds to the grunge vibes with some clean lyrics and melodic stylings which could quite easily belong to the likes of Stone Temple Pilots or Alice In Chains.

I’m not real sure what Dave was trying to achieve with the next track Angel With Severed Wings, but it’s quite possibly a homage to post-hardcore and metalcore, or more specifically Avenged Sevenfold with its eclectic mix of heavy technical riffs, big clean vocals and a touch of pop sensibility. It’s relatively breakdown free, though, which is a nice twist.

Come All Ye Unfaithful chimes in not too far off the feeling of the previous track. This one has got a bit more of a rockier edge though as it makes its way through a plethora of riffs. I actually think this sounds more like an A7X song than that last one, probably closer to the newer stuff. You can take that however you want to. If ya like em, you’ll probably like this track, if ya don’t, who cares what you think anyway.

I was hoping this next track was going to be a sneaky Pantera cover, but it wasn’t, so I cried a little inside. It does have some Pantera tones to it though, with its chorus saturated guitar intro and deep depressive spoken word. After a good minute and half I’m starting to wonder if anything is going to happen though. Something happens, and I’m not sure how to explain it, so I’ll just let you discover it for yourself. All 7 and a half minutes of it!

The final track titled Lacrimus dei Ebrius apparently means something about a weeping drunken god. It sounds like it, too with its doom/sludge metal intro. It does pick up pace a little though and starts sounding more like dad metal, I mean stoner/beer metal. It’s a 10- minute monster, and I’m not sure I’m gonna make it all the way, and honestly couldn’t be fucked writing about a 10-minute track. So, I’ll let you discover it for yourself.

Well then, that was quite the little unexpected journey. Enjoyable? Yeah, it was actually. I’ve often heard people say that this man can do no wrong, and these are usually people who like middle of the road rock, which this very much isn’t. This is a metal album, a metal album that crosses through many sub-genres and styles. Some of which I guarantee will sit way outside the comfort zone of his ordinary fans.

Maybe it might enlighten some people to the world of metal, bring it into the mainstream, and bring onboard a whole heap of new fans to the genre.

Question is, though, do we want that? Have we ever wanted that?

Before I let you all go, on behalf of Heavy Magazine I’d like to take a moment to pass on our deepest condolences to the family, friends, fellow musicians and fans of Taylor Hawkins who we all tragically and unexpectedly lost over the weekend. We were due to publish this review when we first heard the news, and in respect of Dave and the worldwide Foo Fighters community of family, friends and fans, we decided that the timing was just not right and that we should leave you all some time to take a moment to grieve your loss. R.I.P. Taylor, and say hi to Lemmy for us!