DIRECT UNDERGROUND FESTIVAL – The Bands, The Dates, The Places 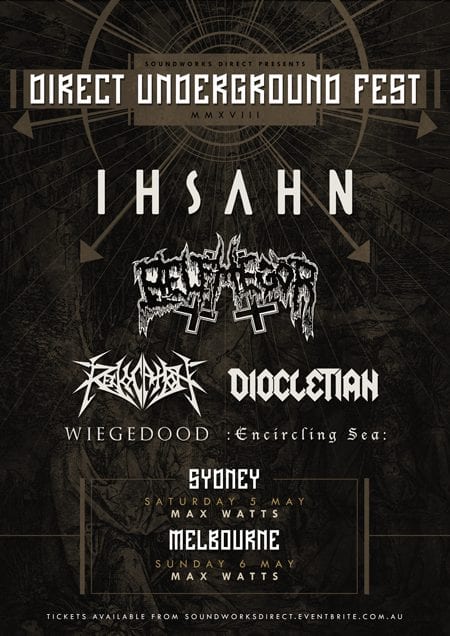 Now that Download festival is behind us we can concentrate on the heavier shit! The Direct Underground Festival is fast approaching and shows ARE starting to sell-out! Check out all the details you need to know below including dates, times, places and SIDESHOWS!

After the successful first edition of DIRECT UNDERGROUND FEST in 2017, this year will see the return of the mini-festival bringing together some of the best and darkest bands in the heavy music realm.

IHSAHN Due to the unprecedented demand for additional Australian shows we are delighted to announce Ihsahn as the headliner for Direct Underground 2018.

Quite possibly one of the most important, influential and creative forces within the realms of Black and Extreme metal music, Ihsahn stands a class apart, an artist unafraid of experimenting and creating some of the most unorthodox music ever heard. The Norwegian multi-instrumentalist, composer and vocalist’s ardent passion towards music, soon grew into one of the world’s most significant black metal bands, EMPEROR. Progressing and evolving quickly, at 17, he recorded and performed the incredible ‘In The Nightside Eclipse’, a milestone and landmark album in the history of metal, which has been voted many times over as one of the top metal albums of all time. Since then, IHSAHN has divided his time between the metal and avant-garde worlds in projects like EMPEROR, THOU SHALT SUFFER, PECCATUM, HARDINGROCK and last but not least his ongoing solo vessel, IHSAHN.

This will be the first time that Australia witnesses the sheer magnificence and elegant yet brutal persona of one of the most iconic musicians in the metal world.

BELPHEGOR The Austrian Occult metallers are well-known for their glorious,
ritualistic live performances that summon the Dark Lord himself, and will be
gracing our shores for the very first time to unleash hell. Belphegor have
been creating blackened death metal for over two decades with their
uncompromising and relentlessly brutal approach, a defining factor of their
music. Belphegor will be performing songs from their most recent release
‘Totenritual’ as well as two decades worth of some of the darkest and
intense music you’ve ever heard.

REVOCATION Thrash metal legends Revocation will be hitting our shores once
again, bringing their trademark high energy and party vibes that has crowds
moshing to their hearts content. Face-melting solos and double bass galore,
this powerhouse of a band from Boston show no mercy to those that gather
before them! With six critically-acclaimed albums to their credit in the
past decade, Revocation are fast becoming one of the most acclaimed bands in
modern Thrash metal.

DIOCLETIAN From the deepest, darkest pits of New Zealand, comes Auckland’s
cult blackened death metal outfit, Diocletian. A career spanning over 10
years and with three full-length albums and handful of EPs, the band’s
crushing and original style is not for the faint-hearted and nothing short
of brilliant. This will be the band’s first Australian; a rare performance
that cannot be missed.

WIEGEDOOD Hailing from Belgium, Wiegedood is fast becoming one of the most
talked about acts within the underground scene and will be making their way
to Australia for the first time. Delivering music that truly stands a class
apart; Wiegedood has perfected the art of inculcating atmospheric and
post-metal elements into darker, heavier black metal music resulting in an
aural assault that will consume your senses. Having made such a massive
impact with just two releases, ‘De Doden Heben Het Goed’ and ‘De Doden Heben
Het Goed II’, they have undeniably made their mark in the metal world.

ENCIRCLING SEA Bringing together the obscure tranquillity of ambient post
metal and the intensity of black and death metal, Melbourne’s Encircling Sea
will open the second edition of Direct Underground Fest and quite literally
the dark calm before the storm The band’s mesmerising and unique style
perfectly fits the lineup of Direct Underground; uncompromising, original
and unique music.