Exploring the macabre and light-hearted world of DEATH TRASH 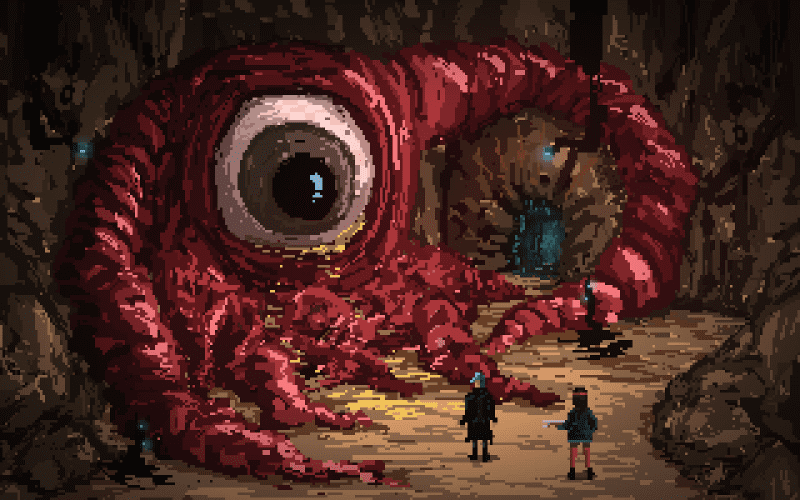 The top-down RPG was once a staple of any gamer’s diet, with ageless gems like Diablo and Fallout leading the charge. The genre has mostly migrated to indie developers these days – which is only a good thing. Indie games are known for their innovation and willingness to mix up the formula, which are the main topics of my conversation with Stephen Hövelbrinks, lead developer of Death Trash.

“Death Trash is an occult post-apocalyptic roleplaying game. We are trying to create a game that recreates that epic feeling we had when we played Baldur’s Gate, Planescape: Torment or Fallout. And it all takes place in a world that is fresh and fascinating, brutal and beautiful, kicking familiar notions in the nuts. The player can choose how to play, using violence or social skills. The combat (gunplay focused) will lean towards the style of Action RPGs, the non-violent gameplay more towards Adventure Games, enhanced with a few abilities to explore and manipulate NPCs. We build on player imagination to give weight to the world and summon that epic feeling. Our roleplaying system is compact and accessible but has enough details and texture to support player progression and individual builds/playstyles.”

Death Trash has a no-holds-barred policy on violence and obscenity, full of dark choices and horrific yet strangely beautiful gorescapes. Living mountains of viscera, Lovecraftian dreams of vile godlike figures, merchants that sell out-of-date puke – nothing is sacred. Death Trash invites players to wallow in filth and violence, taking all popular complaints about video-games to their logical extremes. I asked Stephen to elaborate on this design choice.

“The name of the game already hints at its macabre, yet often light-hearted tone. That was part of our concept right from the beginning. We aimed to create a game where you can do anything you want, no blocks or barriers to creative thoughts. And this also meant no restrictions on violence and obscenity; not for some kind of cheap shock value, but as a logical part of the world. Death Trash is set in a fucked-up future. People have alien traits, there are remnants of biological experiments, there’s a machine dictator gone insane, and people are still figuring out their basic needs, including food and sex. How could it not be a wild mix of obscenity, blood and excrement included, and people talking like we would if we were in that situation? There’s also a good amount of macabre humour in there, but so far keeping all the elements together as a coherent experience is working out well.”

My next question was a misstep. I asked Stephen what kind of scope can be expected in the full game – without realising how intricate and complicated that question was.

“Simple questions like ‘How long?’ and ‘When will it come out?’ are often the hardest to answer. I envisioned the game to have a campaign of around twenty hours. We prefer to have fewer, more special encounters with characters that feel important over lengthy, empty filler material. We are still in the middle of development right now though, and there are a few factors that might still change the outcome. For example, how does the pacing of the combat turn out, how difficult should it be, how many smaller encounters are there between important ones? Will the non-violent gameplay feel like taking a few shortcuts, or will it become a main playstyle, with as much complexity as the combat? All these are factors that will make the game longer or shorter. We’re also experimenting with local co-op and procedural generation to augment the base game (which is the handcrafted single player campaign). The best outcome will be that those people who prefer brevity will be able to focus more on situations that feel important, and those who want to spend more time with the game will also have the opportunity for that. I may wish to expand the world, spend more time with it, even after the game is finished.”

I ended the interview, as always, by giving Stephen the chance to advertise to HEAVY readers: why should you give Death Trash a shot?

“Well, let me put it this way: how often are there games that have all the themes of metal? Not only the steel and power, but also the brutality, the sexiness, and the fuck-it-all attitude? Even the nasty stuff from death metal? I believe Death Trash has it all. You want to ask the Bleeding Head Oracle some obscene questions, make friends with the Fleshkraken, and blow the Machine God to pieces? Go on http://www.deathtrash.com and prepare by subscribing to the mailing list.”