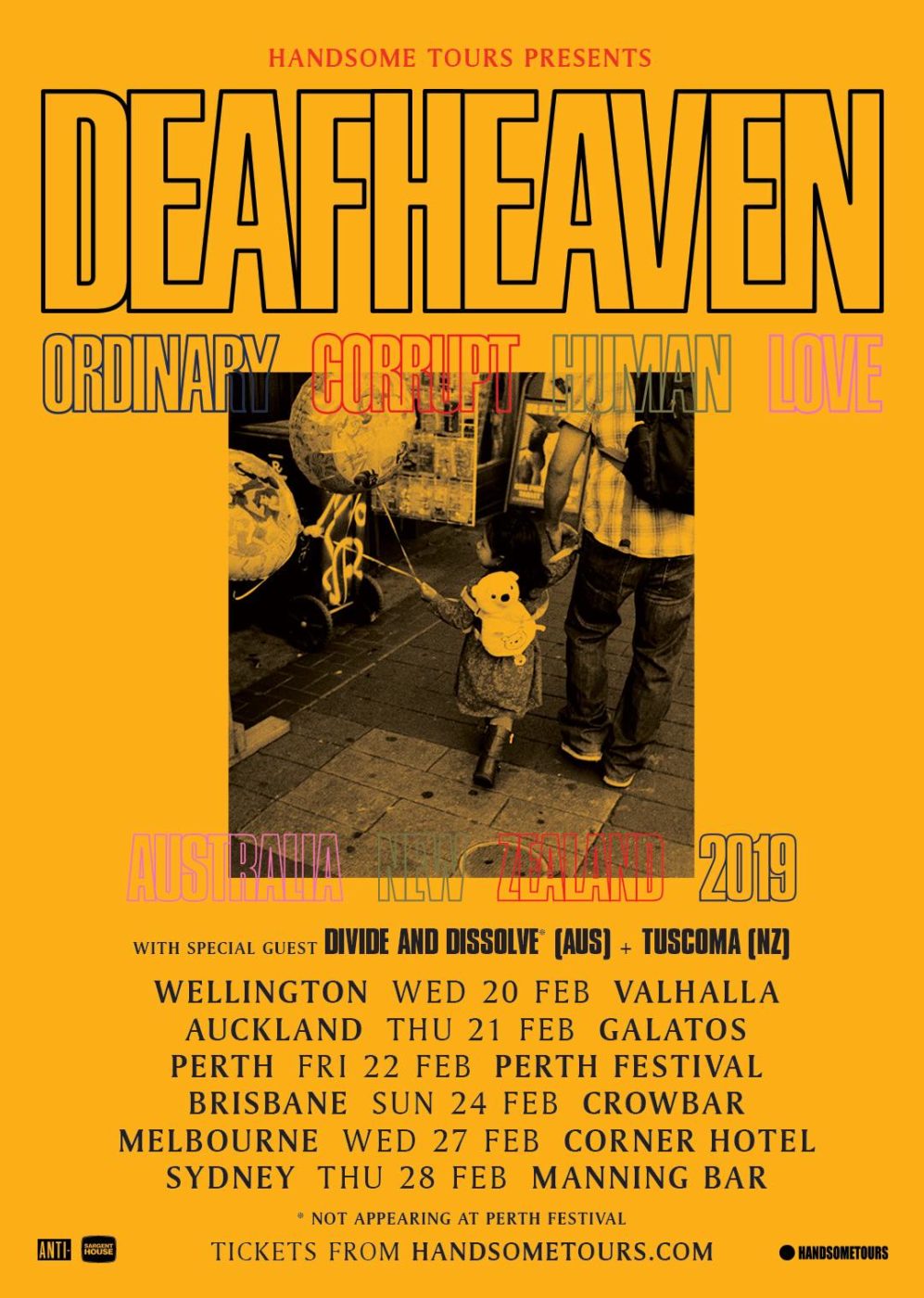 Let’s face it, there are two types of people when it comes to DEAFHEAVEN. There are those that hate them and there’s those of us that love them!

For too long a time, I was in the latter. I just didn’t get them. Their atmosphrice and melodic story telling style of shoegaze black metal influence just didn’t quite gel with me. In fact I found them to be quite grating. As did many others, and there was absolutely no fence sitting with DEAFHEAVEN either. The haters were unrelenting in the scathing judgements and attacks of them and the believers stood firm in their adulation for a band who were brave enough to step out of an artistic and musical comfort zone and travel down uncharted territories and mould all of their influences and passions and smash them all together as one and create something new and…dare I say it…INSPIRING. I can’t remember when I actually embraced DEAFHEAVEN and what particular song it was but it was definitely around the release of New Bermuda [2015] and I think I missed their Melbourne show in 2016 after being a fan for only a short time. I was extremely disappointed but am a patient man and I would happily wait until they next travelled to our shores. One album Ordinary Corrupt Human Love [2018] and three and a half years later, I finally got the chance to witness DEAFHEAVEN along with a capacity sold out room full of like minded fans at The Corner.

Opening up the evening was two piece activist female fronted band Divide and Dissolve. A doom / drone heavy instrumental band would be the best way to sum them up. Drone and doom are probably my least favorite of genres so for me to give a totally and truthfully opinionated critique on Divide And Dissolve’s set would be unfair, but I will say that they had a great many eyes and ears in their direction embracing their nature and message.

Frontwoman Takiaya Reed is an incredibly talented multi-instrumentalist who has an ability to captivate emotion and feeling throughout her performance backed aptly by drummer Sylvie Nehill. Divide And Dissolve’s set was confronting and jarring, clearly meant to represent an agenda to which their audience was grateful to embrace.

Next up were George, Kerry Daniel, Shiv and Chris collectively making DEAFHEAVEN. Their set was a magnificent eighty minutes long, which made up a whole seven songs! (Yeah their songs a quite lengthy, atmospheric and tell a story.) Seeing them live was quite an experience. George was most definitely the imposing and captivating frontman. Embracing and strangling every word, lyric and vocal that burst forth from his mouth and then somehow being able to deliver his words and actions forth towards the crowd was truly something special to watch. He was most definitely in command of his audience this evening and we, the crowd were definitely entranced by his performance. The only other original member, guitarist Kerry McCoy was commanding in his ability to both attack and serenade the musical canvas that is DEAFHEAVEN and their fans. His presence on stage was calming and gentle, contrary yet complementary to his song structure and the cohesive band mate, frontman George. Together they were beautiful to watch. This also takes nothing away from the other guitarist Shiv who was a man focussed and attacked every precise note delivered for the evening, just as Drummer Daniel’s blast beat machine gun delivery complimented every exact note gifted to us throughout DEAFHEAVEN’s seemingly flawless set. And no I haven’t forgotten Chris on bass, he was just awesome to watch. He was smiling and moving around the stage like it was his first gig, seamlessly backing and complimenting his band mates.

Cohesively as one single unifying force at The Corner Hotel DEAFHEAVEN treated their Melbourne fans to seven songs of such majesty and angry passion that it would seem we were held in the palm of each and every band members hands. Truly of all the songs there wasn’t a stand out pick as they were all so good. But if I had to pick out a highlight it would definitely be the debut of their new single “Black Brick”. It was, if mere words can adequately describe it beautifully brutal and fucking heavy.

Thank you DEAFHEAVEN for your 2019 “Ordinary Corrupt Human Love” Australian tour. It was truly an honor to experience it.