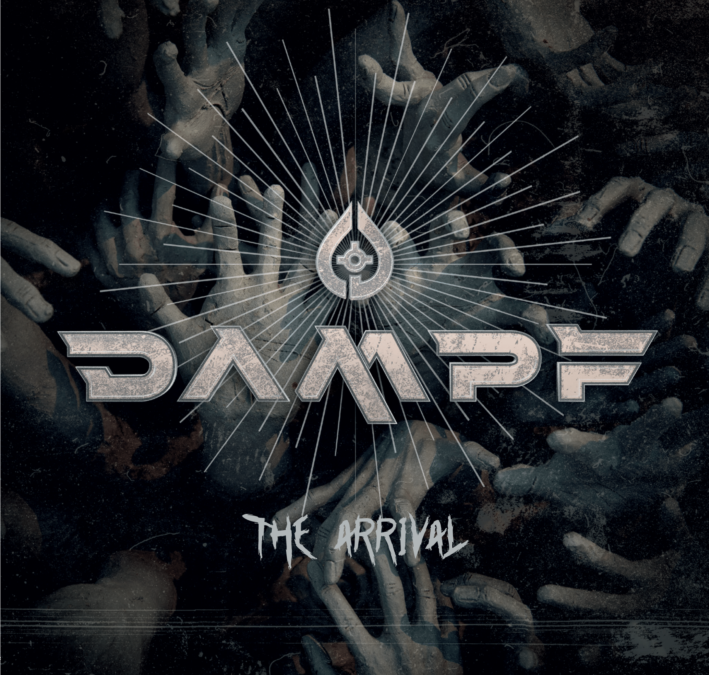 Featuring members of Sabaton and Bathory, new Swedish metal outfit DAMPF is already somewhat of a musical enigma, despite their debut album The Arrival not being unleashed until June 3.

A metal supergroup of sorts (I still cringe when having to mutter those words), DAMPF is lead by A-Tron, who you may know from his career as Martin ‘E-Type’ Erikson.

Promising huge riffs, brutal metal and catchy choruses, DAMPF certainly sound like a revolutionary cog in the metal machine, but, as they say, the proof is in the pudding, so I snap on my napkin and bunker down to listen to what all the fuss is about myself.

Album opener Winterland ambles to life, a sweeping and softly measured voice introducing the album before the vocals commence, the music pulsates, and the ship takes flight.

There’s just a hint of Rammstein in the early stages, but that might just be me and my narrow view of vocabulary.

The guitars soar through Winterland, underscoring what must be a story-setting opening track that has all the majesty of an episode of Game Of Thrones.

Almost trumpet like guitars supersede The Other Side before the measured vocals take centre stage and once more we are whisked into a magical world of musical mystique that almost feels tangible such is its immense scope.

This is more up-tempo than the first track, convulsing throughout in a whimsical fortitude of epic vocals punctuated by moments of controlled chaos.

A wicked guitar solo brings in the second act, and already it is noticeable that each instrument is being given breathing room rather than competing to be heard.

The growls are sporadic and well-placed, adding to the texture of the music without overpowering the intended result.

I’m not sure if there is a conceptual theme running through the album, but it definitely feels more like a soundtrack to a whimsical adventure than an assortment of tunes that each tell an individual story.

I don’t even know how to pronounce the next track, Goeie, but again it is a sweeping mountain of music that almost dares you not to saddle up.

A guttural growl quickly lets you know this is no Jim Hensen production, before the calming nature of the vocals once more paints an unseen visual of a time and place distinctly outside of our current realm.

I never got into Dungeons & Dragons, but I could imagine this is the sort of music I would have slayed dragons to.

It is hypnotic and mesmerizing, carried on an unseen force of nature to an outcome not yet determined.

The twisted, almost demonic vocal interludes here suggest some sort of struggle between good and evil, but I am probably way off the mark.

What DAMPF have managed to do so far is produce a melodic masterstroke of hybrid metal, fusing symphonic elements with subtle brutality that simmers barely below the surface underneath a maelstrom of darkness that threatens to engulf the very air we breathe at any second.

It really is that epic.

I’m starting to get in the habit of leaving any singles for you to check out for yourself, or listen to as part of this review, and as such shall skip over Who Am I and lunge straight into the next track Borne On The Wind.

A wicked guitar riff over the top of chanting introduces this track before the rhythmic vocals once more kick in, and we are off to an unforeseen battle.

If you close your eyes and allow the imagery to take over, you can almost feel yourself being swept away by an unseen army into a pitching battle of hope versus despair, with every savage blow meticulously placed for maximum effect.

The vocals soften up part way through and the track becomes almost holy before the broadsword once more severs the head of the enemy and back to war we go.

Twilight Eyes has some cool symphonic elements to announce another almighty growl/roar that once more transcends battlegrounds and genres.

This soon denigrates into a pleasant number that almost sounds anthemic – like one of those annoying QANTAS adds that tells you the Spirit Of Australia runs through you. Not a bad track, but a touch too wishy-washy for me.

Spread Your Wings O’er Me starts with a beautiful serenade before the guitars and drums destroy the tranquillity and DAMPF once more find their feet in a track that is sonically driven by contempt with an underlying sense of menace.

The soaring vocals return, but not as prettily, which is where I think DAMPF are at their strongest.

This is definitely experimental music, but sometimes experimentation can morph into something less desirable – but not on this track.

This is a stuttering guitar-fueled assault that runs through a plethora of emotions without deviating too far from the sense of foreboding the album has created.

The vocals do get a bit borderline with their angelic nature at times, but the ferocity of the harsh vocals creates a nice contrast that elevates things beyond the ethereal plane.

Steinhaufen begins with beautifully plucked sounds that could be harp before once more the guitars kick the shit out of the ambience and usher in the hardest – and best – number so far.

The Rammstein influence still runs strong, but doesn’t dominate in such a way as to detract from the atmospheric mood DAMPF have created.

It’s like a twisted children’s bedtime fable that has been hijacked by demons from the depths of Hell and skewered in such a way to deliver maximum impact.

Jerusalem ushers in feelings of the promised land with a steady intro that swirls and hangs in the air long enough to whisk you away to an unseen land where pyramids touch the sky and sandals are the footwear of choice.

It is almost dreamy in its delivery, the hypnotic vocals threatening to drag you inwards like some unseen cult before From The E-Ternity switches tact once more, soaring majestically into life like a spirit leaving a decaying body and reaching for an unknown fate.

The fast pace of this song suggests urgency, another ode to battle, perhaps?

Whatever it is, it creates a sense of royalty that seems to be in a constant struggle for supremacy – the forces of good versus evil again at war.

By the time the tranquil sounds of Sea Me herald the end of The Arrival, it is as though DAMPF felt the need to read you your last rights with a touch of finesse rather than abstract violence.

It is a sweepingly epic ballad of sorts that doesn’t feel forced or added to satiate the desires of anyone but the band themselves.

Which sums up this debut effort from DAMPF beautifully.

It is an album borne from the imagination of one man but given life by the collective talents of many, which is all too rare in the modern age of music.