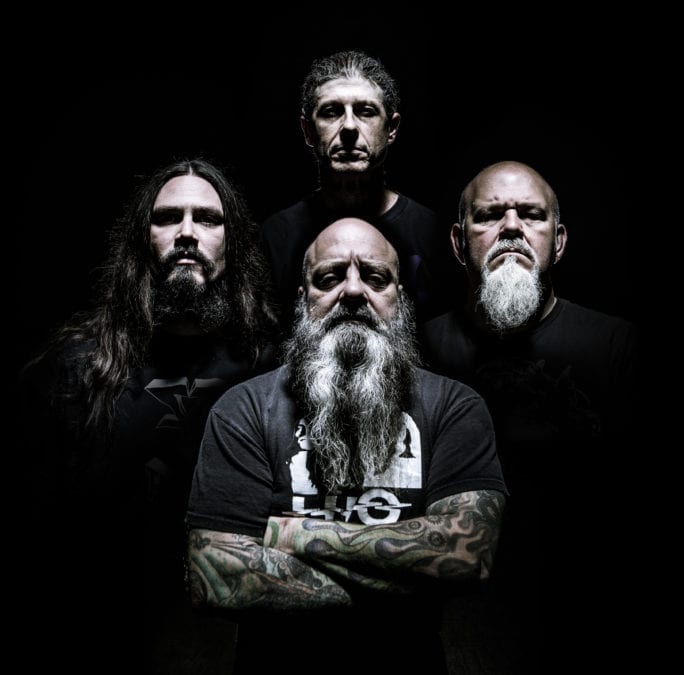 It is hard to believe that in the band’s thirty year history that the legendary sludge metal outfit Crowbar have never made the trip Down Under to play live there… well that is a wrong that is about to be righted as the band embark on their first Australian tour.

When HEAVY Magazine chats to vocalist Kirk Windstein it is a rare moment – he is at home in New Orleans resting. That is rare because Windstein is a member of Crowbar and Kingdom Of Sorrow, he has just finished off a solo album and as he tells me during the interview would be more than willing to go back and work with Down should they ever ask. That is one busy work load!

“Honestly we’ve been talking about expanding Crowbar for a while now,” says Windstein when I ask him how this Australian tour has come about. “We have expanded into Europe and Russia… places like that. I’ve been to Australia before twice with Down and once with Kingdom Of Sorrow, I love it there so I’m really happy that the other guys will get the chance to check it out. I just wish it was more than three shows but it is our first time so we will just see how that works, if it goes well then we can make it a regular thing.”

Windstein seems surprised when I tell him that the buzz around the Crowbar Australian tour has been getting bigger and bigger and that they have a strong fans base here. “Not really no,” he says when I ask him does he know how many Australian fans the band has. “You know I’ve seen Facebook friends from Australian and whatever and I have a few friends from the United States that now live over there but I really don’t know what to expect but I’m hoping that everything goes smoothly and that the fans will really like us. It’ll be a blast for us!”

He also shares a love for the Australian people and says he can’t wait to get here and play in front of Australian music lovers again. “All the shows I have ever played there have been fantastic,” he says. “Everybody that I have ever met down there has always been really cool and really laid back. The shows were all good and yeah definitely the fans got a little crazy but they were enjoying themselves and I love people that can come out and enjoy the music, get up, drink some beer and let loose while they are having a good time – that’s what it is all about really. I think that there are some great audiences down there.”

The fact Crowbar have never been to Australia during a career that has spanned thirty years and eleven albums also throws up another very interesting problem for the band – how the hell do you pick what songs to play to your fans from such an amazing back catalog. “It is really difficult,” he says taking a deep breath as he thinks for a moment. “We are writing our twelfth record right now so when you have 120 or 130 songs and you only get to play 12 or 13 songs that makes it really difficult. With 11 records out already there is a certain few songs that we feel that we have to play in order to make everybody happy. There are certain songs that are crowd favourites but by the time we do that there are not a hell of a lot we can choose to mix up the list a bit. But you know what we will try to come up with something, considering we have never played down there it is all going to be new to Australian fans. But yeah it is very difficult and we don’t really know what to do. The bottom line is though if you go out there and kick ass and kick 110% the fans should be happy and we are looking real forward to it.”

With Windstein just causally mentioning that the band are currently working on their twelfth album I just had to ask how it was going and when the fans can expect to hear the new music. “Well we are actually hoping to have all the music done before we leave for Australia,” he says. “We’re still going on a few songs vocally but there is no big rush. Our approach is a little different this time. Tommy Buckley our drummer lives about two and a half hours west of New Orleans and myself, Matt Brunson and Shane Wesley all live here so we get together a couple of times a week and write stuff. We have riffs and stuff and then we demo the stuff and do a click track to try and get the arrangements together and then we burn a couple of CDS to send to Tommy because we are old school but Tommy is really old school. We already have six songs already written that we are really happy with so we should be able to get a majority of one done tomorrow and then another next week so by Halloween we really should have everything written.”

So with a tour, a new album in the works and a Kirk Windstein solo album out early next year Australian Crowbar fans really have something to crow about… sorry I just had to say it.” 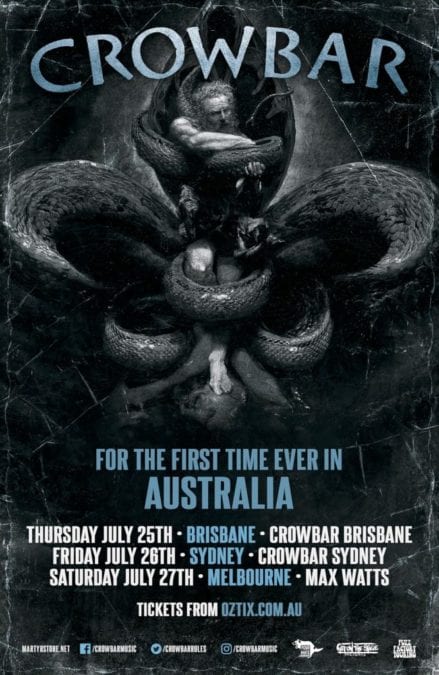