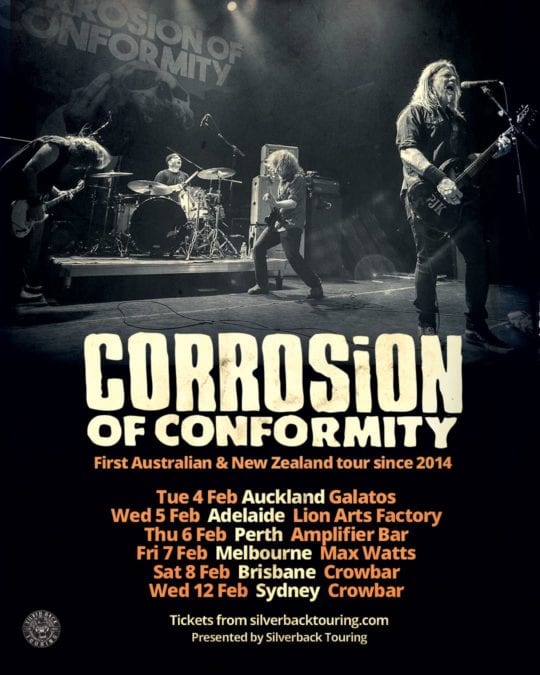 Music hungry punters that arrived early were left scratching their heads at first, as the opening band tested the PA. Walking into a room where the thick sounds stuck to the walls like tar. That could only mean one thing… SLUDGE! That’s right tonight was going to be a set menu of good old fashioned sludge metal.

Going back to the confused punters… the Sydney local bands had swapped shifts so to speak, with instrumentalists Comacozer taking the opening slot. “We won’t be talking much. Our songs very long,” guitarist Rick Burke announces to the crowd before letting loose an infectious riff that captures the crowds’ attention. With no vocals, the music does all the talking and has a lot to say.

The drum work of Andrew Panagopolous resembles a fill similar to ‘Seasons in the Abyss’ at the start of one song, with a Slayer’esque guitar riff before turning into a full out psyche trip. The bellowing bass of Rich Elliott holds the trio together like clay with this tight display of local talent on display. A dose from the recent Mydriasis (2019) is just what the doctor ordered before leaving to well-deserved applause.

Next up were Gosford natives, Arrowhead serving fine Aussie Stoner Rock. Throw The Sons of Kyuss, Orange Goblin and Fu Manchu into a blender and voila… you have Arrowhead!!

Brett Pearl shows he has a great set of pipes belting out tune after tune, no song went unheard. Each song breathing life to an enjoyable set with everything from galloping riffs to fuzz. The bass groove of Dave Lopez stuck out like a psychotic Jack in the box. Matt Cramp never missed a beat like an evil wizard with magic in the form of two drumsticks, resembling Hevy Devy in his Strapping Young Lad days.

Since 2008 the group has been doing their thing. Better late than never to discover this talented trio, with their latest offering, Coven of the Snake (2019) and the title track going down a treat tonight. Ecstatic to be here tonight Brett thanks the headliners for having them here tonight and visiting this great country of ours.

After the crazy times Sydney has seen lately from bush fires to floods, with Mother Nature as unpredictable as ever it is good to unwind and enjoy the rock show with your fellow metal family.

From last witnessing the mighty C.O.C. support Pantera in 2001 at the Hordern Pavillion to now, although a lot has happened since then, we lost Dime and Big Vin and sadly the recent loss of long-time drummer Reed Mullin the band plays on and nineteen years later they sound fresher than ever. With the release of No Cross No Crown (2018) instead of going with the times if anything, the new sound is heavier proving Corrosion of Conformity are here to stay and they will never change for anyone.

As ZZ Tops’ ‘La Grange’ is heard from the PA the excitement lingers across the sweat-drenched pit who was about to get a lot sweatier. The surreal instrumental “Mano De Mano” only meant one thing ‘Seven Days’ the track to follow on the phenomenal Deliverance (1994) came next. Familiar faces Pepper Keenan, Woody Weatherman, and Mike Dean, along with newcomer John Green received a hero’s welcome.

A throwback to earlier days when C.O.C. played hardcore punk in the ’80s, one of the thrashier numbers ‘Paranoid Opioid’ a choice cut from In the Arms of God (2005),  had John belting away the kit like he was a lifelong member. Starting as a roadie in the UK, John started as a fill-in drummer to avoid missing booked gigs and is now has a permanent spot touring the world. Peppers grin is the size of Texas tonight and Woody shreds away on the six-string pulling quirky faces to the crowd and photographers, giving fist pumps and devil horns to just about everyone in the crowd. Mike Dean at times looks like he is deep within an exorcism and doesn’t want to be let out. The man breathes every note of the four-string giving his all the entire set.

‘Heaven’s Not Overflowing’ is one of many highlights, the fact that it was the opening track from Deliverance, which the majority of the set favours tonight, being the first which Pepper moved over to lead vocals, it blends well into ‘Wolf Named Cross’ introduced as a new track from No Cross No Crown.

“A song about getting high and having a drink but not enough to do any harm,” Pepper tells the crowd, before firing away with ‘Albatross.’ Some punters see this as an invitation to spark a doobie as dope smoke fills the establishment. It just goes to show how a brand new song can be wedged between two songs from 1994 and flow like a wave crashing to shore.

Asked if the crowd would prefer to hear a song that was weird or a song they played every night, the answer was weird and a song off Wiseblood (1996) was the usual culprit, with ‘The Door’ and ‘Born Again for the Last Time’ both being welcome with open arms. Personal favourite ‘Diablo Blvd’ from America’s Volume Dealer (2000) had fans singing like a drunken choir and the distinct bass line courtesy of Mike sent shivers down the spine bringing back memories from that gig nineteen years ago.

It was the tribute to Reed with ’13 Angels’, another from the latter mentioned album, which was most touching with the man’s legacy remembered tonight. “For all those who have lost somebody,” Pepper expresses to the many faces tonight.

If there was an anthem for C.O.C. then ‘Vote With A Bullet’ from the heavy hitter, Blind (1991) would be it. One of two songs that featured Pepper on lead vocals on the album sent the pit into one large stomp fest, heads banging in unison.

Wrapping up the night with the crowd sing-a-long ‘Clean My Wounds’, had everyone banging their heads one last time to the southern groove. Pepper even threw himself back into the crowd and was lifted jamming away before getting up and thrashing along with his bandmates wrapping up one tour down-under done the only way C.O.C. know-how! Long live the NOLA boys m/