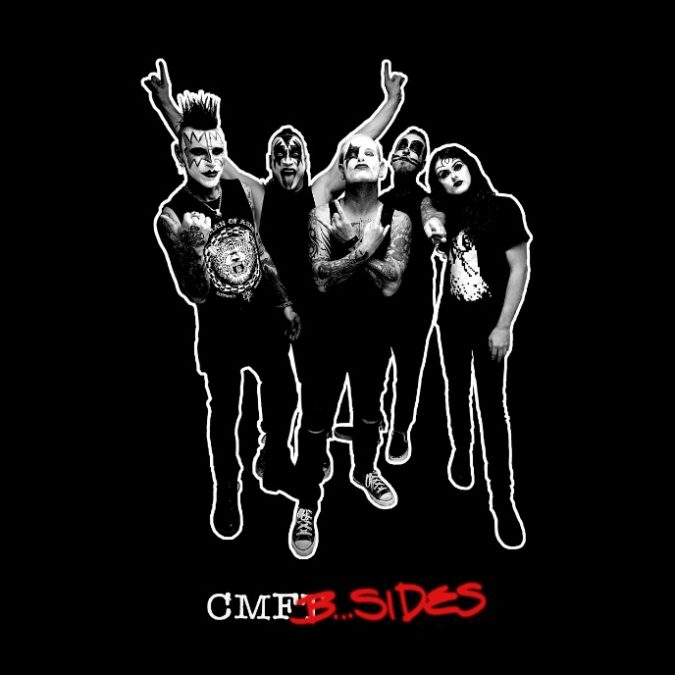 Corey Taylor is past the stage of having to impress anyone – even himself – so when he releases an album called CMFB…Sides you know it is going to be something closer to his heart than something looking to get his name in the spotlight.

Comprising nine unreleased B-sides, covers of tunes that inspired the band, acoustic renditions, and live versions, CMFB…Sides is a glimpse into what makes Taylor tick and the music that inspires him.

The title is a nice play on his recent solo record CMFT and also lets you know from the outset the songs contained on the album are going to be recorded with the same backing band used on that solo release.

Opening with an interesting choice, that being Holier Than Thou by Metallica, Taylor launches into the album with a sole vocal line introducing the track before the band comes in around him.

They have taken certain liberties with the musicianship of the original, adding bars here and there and omitting them altogether elsewhere, but the strong vocal delivery of Mr. C Taylor is the vehicle which carries this track into the sunset.

It shows his love and respect for Metallica just by virtue of song selection, and he delivers the lines admirably without ever trying to replicate the vocals of James Hetfield.

The punk-tinged All This And More, originally by Dead Boys, follows and is a restrained homage to the song that meanders along without ever reaching great heights. Not through any fault of Taylor, who snarls in the right places and expresses where he should, it’s just the song itself is far from inspiring.

The first acoustic track is a version of Kansas from Taylor’s solo album, which saunters into play with a laid-back guitar approach that almost verges on the country side of Western.

Which is exactly what the song is. A rollicking, feel-good tune that would make the cows shake in their paddock while the goats bang their heads into the wooden fence pailings.

Eddie Money’s Shakin’ powers into life next and improves on the original with an up-tempo feel while still maintaining the original swagger of the initial release.

This track rumbles along with a rock/pop feel that is offset by deep bass drum patterns and foot stomping finesse.

The double intertwined medley of Home and Zzyxx Rd from Stone Sour purrs from the speakers next, a song, as Corey introduces, is dedicated to his wife.

Home has a familiar feel to it, Taylor’s vocals resonating like a long-lost lover, comforting and soothing at the same time. Rather than be an acoustic guitar version, this take has Taylor playing piano while singing, the emotion in his voice conveying the deep sentiment of the lyrics.

As Home fades into Zzyxx Rd – my personal favourite of all Taylor’s ballads – the transition is as seamless as it is beautiful.

This song always manages to strike a chord every time I listen, with this version having more impact than usual.

One of Taylor’s strengths – regardless of which band he is fronting – is his ability to craft words together in verse. His lyrics are both poignant and all-encompassing, creating an internal visual scope to accompany the words that can be interpreted in many ways depending on your mood.

Red Rider’s 1981 classic Lunatic Fringe gets the stripped back, acoustic feel next, with a nice flamenco style intro that leads into the main body of the song.

The song works well in the softer version, the guitar playing a definite highlight.

KISS are represented as well with Got To Choose, and from the guitar drenched intro this song feels like a winner already.

It grooves in all the right places, Taylor’s voice beautifully doing justice to the original. The layered backing vocals accentuate the sound, with the entire backing band delivering an awesome performance that rings true to the era in which the song was released. And those solos…

Taylor’s other contribution from his solo album, Halfway Down, is attacked acoustically for the next song, with Taylor’s voice dominating proceedings while the guitar strums along more as an accompaniment than a driving force. This is another great acoustic version, which again is possible due to the solid structure of the original, with the guitar play increasing as the song gains traction and adding another layer to the track.

Of course, he doesn’t. This is probably the most faithful to the original version on the album, although still given healthy doses of Taylor magic.

Even the handclaps are kept in the mix, the rolling feel of the movie perfectly captured.

Mum would be proud.

CMFB…Sides might not be for everybody, but that doesn’t mean it is an album for fans only. As a musical homage to one man’s influences, it is a beautifully crafted package of songs. It definitely isn’t original (nor is it meant to be), but it is fun and entertaining. And let’s face it, who couldn’t do with a little more of that in the modern climate?