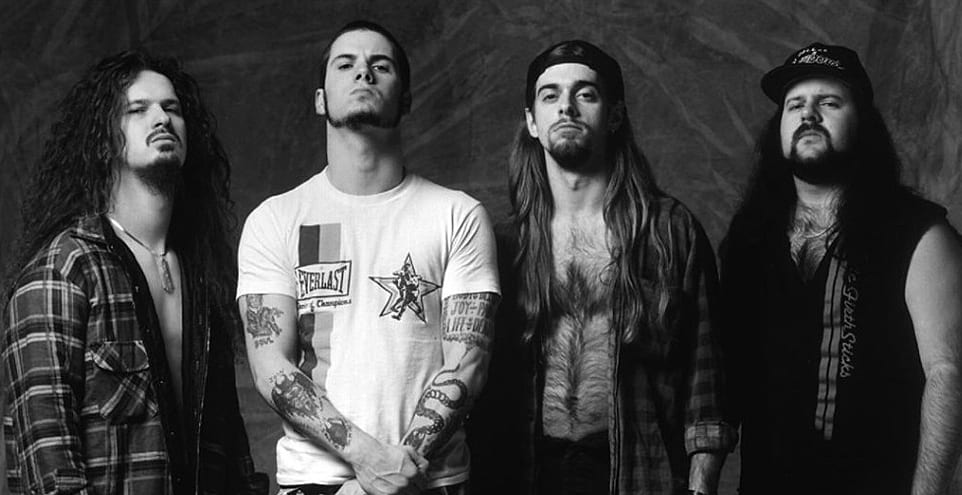 Today marks the death of the great Dimebag Darrel of Pantera, and we pay tribute to his extraordinary talent with this week’s HEAVY ROOTS.

In this lengthy edition, we concentrate on the original groove metallers, Pantera and how they have branched out with numerous bands, side projects and solo material. The roots of other seminal bands intertwine bringing influences from Nola and beyond to the table.

Pantera’s Metal Magic was the creation of the Abbott brothers in 1981. Both drummer, Vinnie Paul and guitarist, Darrell Lance were joined by Terry Glaze on rhythm guitar, vocalist Donny Hart and bassist, Tommy D. Bradford. In 1982 the band went through a line-up change and were now known as Pantera. Rex (Rocker) Brown replaced Bradford on bass and Glaze became vocalist after Hart left. Diamond Darrell, as he was known then was now the sole guitarist of the group. Starting as a glam metal band, supporting the likes of Dokken, Stryper and Quiet Riot the underground fanbase grew.

Metal Magic (1983) was released on the label of the same name, promoted by the big name bands that Pantera had supported. Jerry Abbot, father of Vinnie and Darrell, produced the album. Projects in the Jungle (1984) followed and although sticking to their glam roots the band became heavier still with I Am the Night (1985). This would be the final album with Glaze as vocalist.

After a number of auditions Phillip Hansel Anselmo from New Orleans was recruited as the new vocalist and the glam image was dropped. Power Metal (1988) was the first album to feature Anselmo on all tracks apart from final track, P*S*T*88, which featured Diamond on vocals.

Diamond was chosen to play guitar for Megadeth, however refused due to Dave Mustaine not allowing Vinnie to join him, the one condition that the guitarist had. The Abbot brothers decided to concentrate on Pantera and after signing with Atco and befriending producer, Terry Date, Cowboys from Hell (1990) was released and the rest of history. The debut featured along with the title track, greats such as Primal Concrete Sledge, Domination and Cemetary Gates.

Pantera toured with Exodus and Suicidal Tendencies promoting the album and were joined onstage with Rob Halford in 1991. They supported Judas Priest for their first European show. Pantera were also part of a bill that included AC/DC, The Black Crowes and Metallica at the infamous Monsters of Rock Moscow (1991), celebrating Western music performed for the first time in the Soviet Union, with a crowd of over 500,000. The footage was released on the home video, 3 Vulgar Videos from Hell (1999), arguably the most successful home video, heavily influencing both Drowningpool‘s Sinema (2002) and Hellyeah‘s Below the Belt (2007) home videos.

Vulgar Display of Power (1992) was the follow-up and it included numerous singles and fan favourites such as Mouth For War, Hollow, Fucking Hostile, This Love and the song covered by many, Walk.

The nickname Diamond was changed to Dimebag and Rex dropped the Rocker moniker, using his surname Brown whilst touring alongside Black Sabbath and Iron Maiden, co-headliners of Monsters of Rock, Italy (1992). Far Beyond Driven (1994) saw tracks such as Strength beyond strength, 5 minutes alone and first single, I’m Broken, see the light of day. Pantera were put on the bill of another Monsters of Rock festival, this time in South America. The Abbott brothers had a feud with journalists from Kerrang who depicted cartoons of big Vin that weren’t taken nicely. Anselmo on the other hand got charged for the attempted assault of a security guard who was preventing fans to take the stage.

Due to back pain and surgery that would take a year in waiting to be performed, Anselmo chose to use heroin to ease the pain. Around this time, the supergroup Down was formed, with guitarist Pepper Keenan, who fronted Corrosion of Conformity and three members of Crowbar, guitarist Kirk Windstein, bassist Todd Strange and drummer Jimmy Bower (also of Eyehategod). NOLA (1995) was well received however band members left to concentrate on the bands they rooted from and Down disbanded for many years. All bands are valid mentions as certain members come up again in other projects later discussed.

The Great Southern Trendkill (1996) saw a different approach to recording with Anselmo using Trent Reznor of Nine Inch Nails fame’s studio in New Orleans while the rest of the band recorded in Dallas. Anselmo‘s vocals on the record were overdubbed to give a demonic sound, and it remains to be an underrated album with fan favourites such as Floods, the drug inspired Suicide Note both pt. I and pt.II  and Living through me (Hell’s Wrath). An overdose in Dallas, which saw Anselmo‘s heart stop after a gig in ’96 proved it to be a tough time on the Pantera camp.

Official Live: 101 Proof (1997) was the band’s first live recording and it featured 2 unreleased tracks. Pantera intensely toured as part of the ’97 and ’98 Ozzfest festival. Never short of a side project, Anselmo went by the moniker of Anton Crowley, playing the guitar for Necrophagia and vocals, guitars, bass, drums for Viking Crown, alongside Killjoy, vocalist from Necrophagia and girlfriend at the time, who went by the stage name of Opal Enthroned on keyboards. Later forming the acoustic project Southern Isolation. The Abbott brothers formed Rebel Meets Rebel with country singer David Allan Coe and recorded music between 1999 and 2003. The album, however, wouldn’t see the light of day until 2006 on Big Vin Records.

The band got back into the studio in ’99 and Reinventing the Steel (2000) would be the final record for Pantera. Returning to Ozzfest and set for global domination, promoting the album on a world tour. Luckily the band made the trek down under and this writer got to witness the band for what would be their last time in Australia. Supported by Corrosion of Conformity and local band Segression, the band played songs off their back catalogue and some new greats off the record, which included Goddamn Electric and Revolution is my name. The Abbott brothers got tired of waiting around for Anselmo and disbanded Pantera in 2003.

Down released Down II: A Bustle in Your Hedgerow (2002) with Brown replacing Strange on bass. Superjoint Ritual was another project that also featured Bower on guitars, and Joe Fazzio on drums. Hank Williams III was the live bassist as Anselmo wanted to concentrate on singing only. Use Once and Destroy (2002) was released on Sanctuary. The follow-up A Lethal Dose of American Hatred (2003) saw Williams as the credited bassist with Kevin Bond joining Bower on guitar.

The band is now known as Superjoint, with Caught Up in the Gears of Application (2016) in stores as we speak on Anselmo‘s very own Housecore Records, the new home of King Parrot, with Anselmo producing Dead Set (2015). Check out Anselmo‘s cameo on the clip below and brand new clip for Superjoint.

Down continue as a group releasing Down III: Over the Under (2007), with Brown leaving the group in 2011 and being replaced by Patrick Bruders on the first of two EPs, Down IV – Part I (2012). This would also be the last recording for Weinstein who went on to concentrate on Crowbar. Down IV – Part II (2014) would see new guitarist Bobby Landgraf.

The Abbott brothers joined forces, forming Damageplan with former Halford guitarist Pat Lachman on vocals and Shawn Matthews from Jerry Cantrell‘s solo band on bass. After the recording tattooist, Bob Zilla replaced Matthews. New Found Power (2004) would be the last collaboration from the Abbott brothers as Dime was taken from us way too young by a crazed fan on that tragic night on December 8, 2004. Black Tooth Grin: The High Life, Good Times, and Tragic End of  “Dimebag” Darrell Abbott (2009) is recommended reading for an in-depth look at that night and the amazing life Dime lived. A true legend that has influenced so many musicians today with his prolific technique.

As Brown and Anselmo reunited with Down, Vin formed Hellyeah with vocalist, Chad Gray and Greg Tribbett of Mudvayne, joining Tom Maxwell of Nothingface fame on guitar. Zilla replaced Jerry Montano on bass after the debut Hellyeah (2007).Stampede (2010) and Band of Brothers (2012) would be the last albums to feature Zilla and Tribbett. Zilla was replaced by Kevin Churko on bass who featured on the follow-up Blood for Blood (2014). Tribbett, also the older brother of Derrick “Tripp” Tribbett, former bassist for Dope, along with Mudvayne drummer Matthew McDonough, Skrape vocalist Billy Keeton and bassist Perry Stern, had formed the band, Audiotopsy in 2015. Churko was replaced by Kevin Sanders who now plays for the band along with newcomer Christian Brady who joins Maxwell on the most recent, Unden!able (2016).

Apart from his collaborations with Jerry Cantrell on Boggy Depot (1998) and with Cavalera Conspiracy on Inflikted (2008), Brown has been a member for not only Down but also recorded with Crowbar on Lifesblood for the Downtrodden (2004). Brown now concentrates on his band Kill Devil Hill, originally with Vinny Appice, formerly of Black Sabbath, Heaven and Hell, Dio, guitarist Mark Zavon and lead vocalist Dewey Bragg of Pissing Razors. Johhny Kelly of Type O Negative later replaced Appice. The band released Kill Devil Hill (2012) and Revolution Rise (2013). Brown published an autobiography, Official Truth: 101 Proof (2013), which is recommended reading.

Anselmo has made guest appearances with bands ranging from Anthrax to Vison of Disorder and everyone in between. Another notable side project formed by Mike Williams, vocalist of Eyehategod was Arson Anthem, releasing an EP, Arson Anthem (2008) and Insecurity Notoriety (2010). Walk Through Exits Only (2013), the long-awaited solo record was released under the name  Philip H. Anselmo & The Illegals.

Anselmo‘s most recent black metal supergroup of sorts, Scour, featuring John Jarvis of Pig Destroyer and Derek Engemann of Cattle Decapitation, two bands whom the busy frontman has collaborated with in the past, along with Continuum‘s Chase Fraser, and Strong Intention‘s Jesse Schobel.

Pantera leaves a massive impact on the world with roots that run deep within every human out there who calls themselves a metalhead. Raise a glass to Dime and wear that black tooth grin! \m/