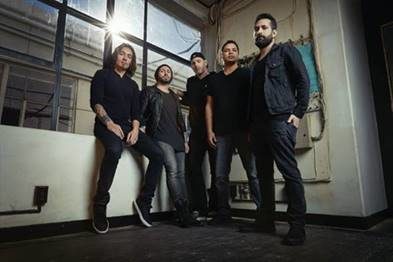 Periphery have for the past fifteen years consistently risen to the top of the heavy djent dependant spectrum prog tree thanks to their strong songwriting ability, all the while reinventing themselves without ever having to reinvent the wheel. Since 2005 founding member and guitarist Misha Mansoor’s vision has been focused on crafting incredibly intricate albums, accompanied by for the most part of a decade, Jake (Bowen – Guitar), Matt (Halpern – Drums), Mark (Holcomb – Guitar) and vocalist Spencer, enabling Periphery to always have laser-like precision and direction tagging the band with the title as one of the pioneers of our beloved djent movement.

Five albums of such incredible composition and depth in a decade equates to the mind-boggling calculation of an album every two years. And…in a year of almost zero live shows, we the punters have crawled through during this 2020, Periphery have finally released a live album showcasing their career, simply titled Live in London which was captured on the last night of the bands 2019 Periphery IV – HAIL STAN world tour.

Heavy Mag had the opportunity to discuss the formation of this momentous album with vocalist Spencer Sotelo and how it mysteriously came to fruition.

A live album is an amalgamation of a bands entire catalogue – a single, almost career-defining snapshot of a band at an exact time. Metal V broaches the subject of preparing to record a live set, aware of the task that lays before them and before even playing a note, particularly that daunting moment just as the band is about to walk out on stage.

“Yeah dude and that’s the reason why we haven’t done a live album before,” Sotelo replied, “because we are all perfectionists and if we go into a show being like ‘Oh shit this is being recorded for a live record’ we have to worry the whole time about fuckin’ up and that’s why we’ve never done one in the past…So that leading into what I’m about to say is like…”

At this point Sotelo pauses, takes a deep breath, and continues with the mind-blowing revelation of how Live In London came to be, …“we didn’t even know this was going to be a live record! That (night) was our biggest show we have ever played to date, it was a sold-out 3,000 capacity. We just went into it like ‘okay, we’re just gonna have fun’ but little did we know our sound guy Ronnie was recording the whole show, multi-tracked!”

At this point, both our minds are blown as Sotelo continues further, adding “even after he did it he didn’t say anything about it. We didn’t hear anything for six or seven months after the show and then we get a message from him saying, ‘Hey I mixed this entire show, take a listen and if you guys wanna release it then let me know!’ So seriously it came to be by just his doing and by accident and luckily…we didn’t play like shit that night!”

With the run time of the album coming in at an hour and fifteen minutes, Metal V asks what the process is like compiling a setlist from a back catalogue of songs that has absolutely no bad songs.

“There are a lot of moving pieces that go into creating a Periphery live setlist,” Sotelo explained. “As you would know we have a lot of different (guitar) tunings, six, seven and eight-string guitars over the course of five or six albums so it’s always, okay, this song is in this tuning let’s have the song after it being a totally different tuning so that things get switched up and feel like a roller coaster the whole time.”

With this ever-evolving change in pitch and diversifying Periphery’s live experience, Sotelo adds, “but then we also have to think about the longevity of everybody in the band being able to play their instrument as crazily as they do for an extended period of time and also for me and (Matt) Halpern our drummer.  Everybody has to have a tailored set that allows everybody to catch their breath and do what they do best!”

Speaking of their live album release and how the 2020 covid-filled year is a bit shit with almost every band in the universe being placed into forced exile, Heavy presses Sotelo on how he feels about not being able to play gigs?

“It’s weird man,” he sighed. “The first few months of it were pretty shit for me, I’m not gonna lie! I definitely felt it mentally but I will definitely come out on the other side of 2020 feeling better than I started. I feel like just being forced to be in my own headspace and forego the things that you’re used to make you a stronger human being and I’m kind of seeing that now!”

Listening to their extensive full interview you will hear Spencer talk openly and candidly with Heavy Mag, expanding upon the Live In London release as well as what the looking glass may predict for Periphery next year.  All this plus some tracks played in their entirety from the live album as chosen by Spencer and his reasons for picking those songs specifically.