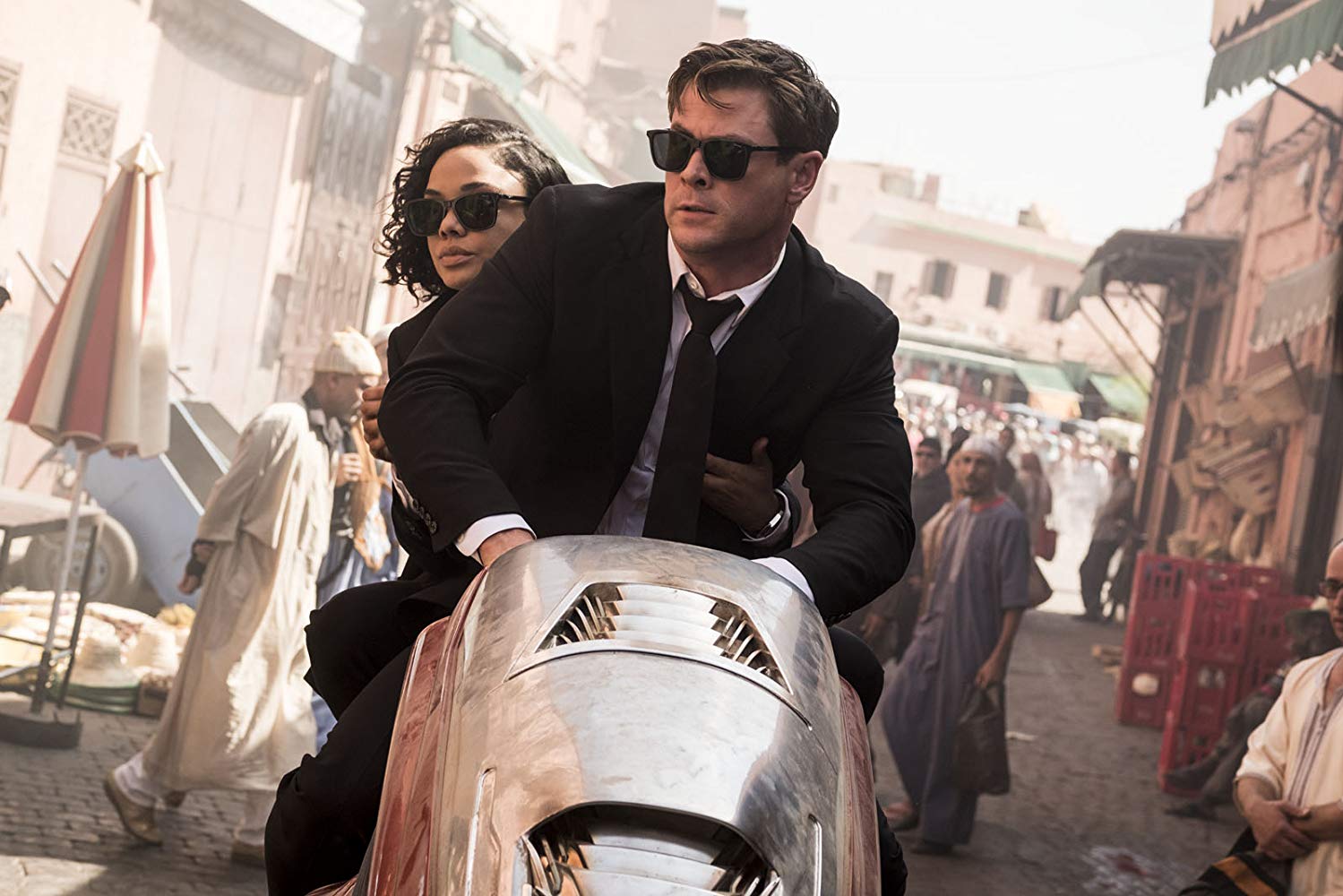 He is one of Hollywood’s biggest stars – literally playing a God on the big screen. She maybe new to the scene but already has blockbusters like Thor: Ragnarok and Creed under her belt. Together though, Chris Hemsworth and Tessa Thompson become the new breed of men in black in Men In Black: International.

“She has an experience with an extra-terrestrial when she is a young child,” says Thompson when she is explaining how her character of Agent M fits into the Men In Black universe. “It is an experience that opens her up to the idea that the world isn’t exactly as it seems – that they live among us. She gets a glimpse of this organisation – these two men in black appear at her home – and she kind of spends the rest of her life seeking out that organisation because now she has this information that nobody else has. Her parents were neutralised and they don’t remember – so it is very isolating. In some ways the only place that she can be at home is within an organisation that also has the same information about the universe that she now has.”

“At the start of the film he is quite accomplished with his universe saving,” says Hemsworth when the talk turns to his character – the suave Agent H. “He has an extra unhealthy dose of ego because of his position and all this, he kind of works alone and doesn’t need a partner and such. Then he meets her (Agent M) and he’s like oh cool a young rookie…hello… no worries. But she then ends up accompanying him on a mission and I think he really enjoys her company and thinks that she is fun and then they have vastly different approaches to the work and their values and what they are doing – that all becomes apparent and then there is some healthy tension there, then they start to butt heads. But what I love about this is that it is a big learning curve for the two of them, especially for my character because he has some self-discovery because she looks at him and says ‘look a little deeper because I think you are missing or avoiding something – some bigger truth.’ So they really complement each other in that way… it is cool.”

The talk then turns to what they think of each other and Thompson quickly says, “One of the things that I like about Chris is that when you get into improvisation he will really push you to the point where you will probably never be hired again,” she says laughing.

“You have to rein me in,” says Hemsworth turning to her. “You just have to rein me in, but part of creation is destruction sometimes. We did wreck some stuff, but I think that is part of my process I kind of just go at it and then think ‘okay that is the boundaries’ That is pretty unfair for Tessa sometimes because she will be like ‘what the hell are you doing, Chris?’”

“It was only unfair the first day I worked on Thor,” she says also laughing. “Then I was like ‘wow, can I talk now? Or are you just going to keep talking because I was supposed to have a line.’”

“This time though because we had done it so many times before we were able to pick up on that energy,” says Hemsworth nodding in agreement. “There is kind of a mad chaos to it which is a lot of fun.”

“There is a lot of trust there,” adds Thompson. “We can look at each other and be like, do I suck? And he will say yes, and very occasionally say no.”

That turns the discussion to talking about what it was like to work with the legendary Emma Thompson. “I am a huge fan of hers so I was really nervous on the first day,” says Thompson. “Then I had this forty minute commute to get to work, so I was kind of steeling myself for the journey and then fell asleep. So I arrived, and sometimes as humans we drool, so I wiped my mouth, opened the door and there was Emma Thompson standing there and waiting for me. So I only had one second to prepare myself for her and to impress her and she was so lovely and we just had such a wonderful time together.”

One of the things that really does stand-out with Men In Black: International is the amount of cities that the film is set. The characters go from New York to London to Paris to Marrakesh and that is something it seems like Hemsworth enjoyed “It did feel like a working holiday,” he says with a smile. “But it was also one of the strengths in making this feel like we weren’t just mimicking what had been done before. Aesthetically it gave a tone and feel by going to different places like London and Italy and Morocco and Paris and New York. IT also kinds of forms a different attitude amongst the characters as well because you do react to your environment within an environment because suddenly we’ve gone from London in a studio to Italy on the coastline… there is a whole different energy and I love that. I think that is one of the wonderful things about being an actor you are able to globe-trot around the place and have somebody else pay for it.”

Men In Black: International is in cinemas now.