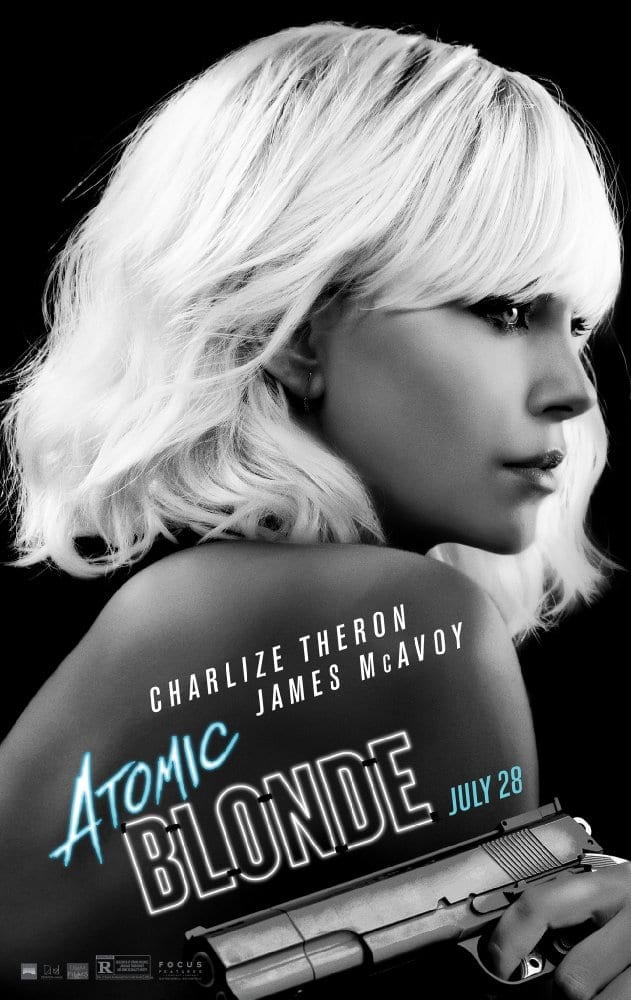 Move on Evelyn Salt and James Bond because Charlize Theron is crashing through the spy pack with her brilliant portrayal of Lorraine Broughton in one of the films that is promising to be one of the big box office winners of 2017 – Atomic Blonde.

Based on a popular graphic novel, Atomic Blonde sees Theron play a spy who gets involved in a little Cold War action when she is sent by MI6 to investigate rumours of a list that contains the names and identities of some of the world’s top spies falling into the wrong hands in Berlin alongside another operative, played by James McAvoy. Added to the mix is the fact that the film is directed by David Leitch, the man who co-directed John Wick.

For Theron though, this really was a passion project as she was one of the brains behind the film as well. “I didn’t choose it,” she explains. “I saw potential in this graphic novel and I think I wanted to develop something that had a protagonist in it that was very close to what Lorraine was in that graphic novel. Somebody that could be a female protagonist that lives and breathes in a world that is mostly dominated by males and live in an environment where she can play by all the same rules that the boys do in that world. So, somebody unapologetic, interesting, layered, conflicted and you know somebody struggling with her own humanity. I think they were all the things that made me want to develop a character like that. I read a couple of the pages of the graphic novel that were sent to us, it was an unpublished graphic novel at the time and that’s what sparked the interest in wanting to buy the rights and develop Atomic Blonde.”

When asked to explain the character of Lorraine a little more deeply Theron laughs. “Well she works for MI6, she is very good at her job. She has made peace with the fact that she chose to live in this world, and it is a tough world to live in, especially for a woman, but she is good at it but she likes doing it and she carries the consequences of all of that… and I think there is something very empowering about her.”

With every critic talking about how intense the espionage storyline of Atomic Blonde, it wasn’t much of a surprise to learn that Theron is a very big fan of espionage and spy movies in general. “I like the spy-thriller aspect of it,” she says. “I think I’m also fascinated about how you can take those stories and turn them on their heads a little bit because I think we’ve seen a lot of the spy thriller genre and we’ve seen how they go from act to the next act and I think I was interested in how you could take that, not only in the story but in the look and feel of what those movies normally look like and then turn that on its head and make it something super energetic and fun.”

Theron also admits there was a little bit of pre-planning that went into playing Lorraine as well.

“I didn’t do any research into how they walked or silly things like that,” she says. “But I was really interested in finding out what kinds of people do that job, it takes a certain personality to do that job and I guess even to want to do that job. There were some interesting things once I started reading about things, especially during this time period when operatives would go into areas where their agencies would just abandon them and a lot of them at the time were more prompted to  take the job if they were having issues in their family life or if they were dealing with alcoholism or something that would almost make them self combust – that was a really interesting idea. And once we started shooting it I was very interested in the ‘why’ because it is a tough, cold world to be in.”

Anyone that has seen John Wick knows that director David Leitch likes to make his fight scenes as realistic as possible, so there is very little surprise to learn that he really put Theron and the rest of the Atomic Blonde cast through their paces and it sounds like she wouldn’t have wanted it any other way. “I wanted to do this in a way that was believable,” she explains. “I knew that is was going to take a lot of work to fight like that, but I never wanted anybody to say that a woman couldn’t do that so that was important and I think that was what drove me to want to be as capable as I ended up being as physical as I could be. I trained for two and a half months and then I kind of continued that as we made the film.”

Theron is quick to admit that working with Leitch who has previously been a stunt man himself had both positives and negatives. “There was a bit of both,” she says with a smile. “The positive was that he knew where to put a camera, he knew how to shoot stunts and do action. He is so comfortable in that world, that he as eye for it and he definitely has a passion for it, but yeah I think that in other hands I probably wouldn’t have been pushed as hard, but I wanted that… I wanted somebody to expect more from me and push me more, and he was amazing at that.”

Of course, some of the most intense scenes that Theron had to create in Atomic Blonde was alongside actress Sophia Boutella, who most people would recognise from her recent performance in The Mummy. Theron says she is brilliant to work with. “She is great, I absolutely love her,” she says smiling. “We were very lucky in finding her because the role of Lasalle was very tricky, it had to be somebody that had a strength about them but also an incredible vulnerability. In a way she had to be broken but fully functioning because of that story and that is tough to find somebody that has that and she has that in spades. She is so beautiful in this film.”

Atomic Blonde is in Australian cinemas on the 3rd August.