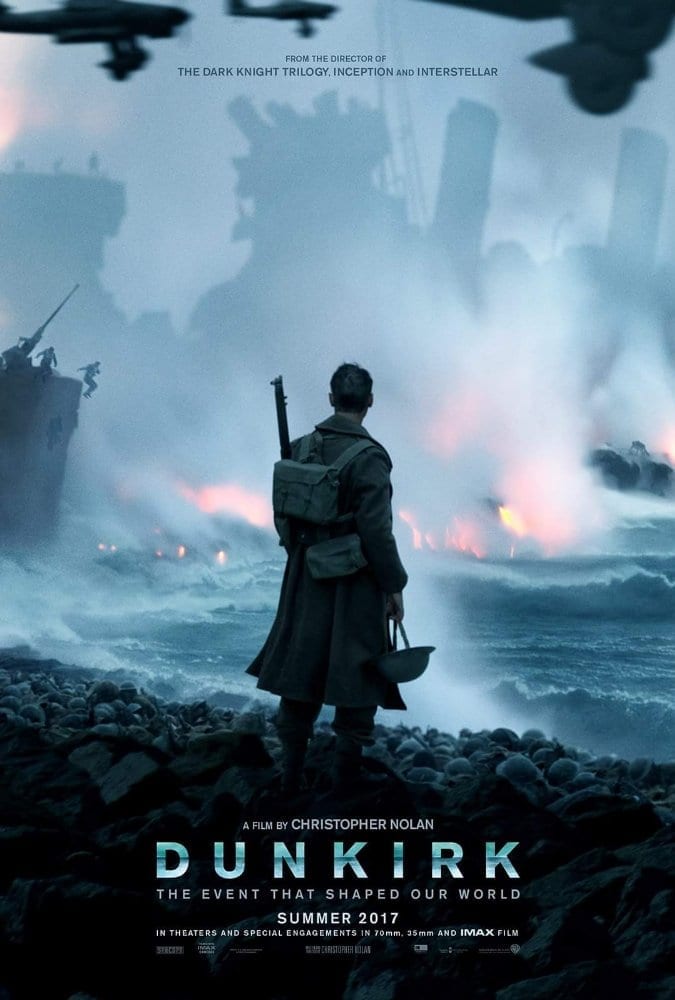 Over the years, Christopher Nolan has made a name for himself as one of the finest directors of the modern era. He has been nominated for three Oscars over the years and has been the man at the helm of critically acclaimed movies such as Memento, The Dark Knight Trilogy, Inception, and Interstellar.

Now Nolan’s work returns to the big screen in a way that we haven’t seen before. Dunkirk is a movie that critics are saying is not just a film – it’s an experience unto itself – a work of art if you like. Somehow, Nolan has taken veteran actors like Tom Hardy and Mark Rylance and mixed them with newcomers like Harry Styles and Fionn Whitehead, and the end result is one of the most visually spectacular war films you are ever likely to see.

It doesn’t take long listening to Nolan talk about Dunkirk to realise that this is a film that he was passionate about, due to the subject matter, from the very beginning. “Well, as for most British people, the story of Dunkirk is something that we grow up with,” he explains. “I can’t even remember the time I was first told about the events of Dunkirk. As a storyteller you are always looking for gaps in the culture or in the cultural record – stories that should have been made into modern films and haven’t been and Dunkirk is certainly one of those. I think it is one of the great stories of human history and it hasn’t been addressed in modern films until now. People of Britain talk about the Dunkirk spirit and I think the residence of the story is different for different people, but at the heart is community heroism in the face of adversity. It is not so much a story about individual heroics as it is a story about a community effort. It’s about how as a society, as a group of people we can achieve so much more than we can individually.”

One of the aspects that have wowed critics about Dunkirk is how Nolan has managed to weave the stories of the land, air and sea at Dunkirk together so brilliantly well and he says that he wanted to do that but keep an intensity throughout the film. “I wanted to do that but to have an intensity,” he says. “Dunkirk is a survival story, and it is a story about 400,000 men trapped on a beach with the enemy moving in on them from all sides. It is a story about a desperate time, they had to get these guys back home, and I wanted to put the audience on the beach with these guys and put the audience in the cockpit of a Spitfire battling the enemy in the air, and I wanted to put them in a small boat heading over to help these guys. So to do that I decided to tell the story with intensity but with subjectivity and from three different points of view. Over the course of the story, they all braid together, and you get a more coherent look at the bigger picture of Dunkirk.”

Nolan also goes in depth into how he achieved the feat of shooting this film with very limited CGI. “What we did was try to shoot in camera as much as possible,” he says. “That way we could do as much for real as we could. We want the film to feel tactile and physical and authentic. We want it to play in the present tense, so the audience feels like they are there and there is no screen between them and the events of the past. To do that, I felt very strongly that we shouldn’t use too much special effects, so we tried to do as much in camera as possible by sourcing real planes from the era, real boats and putting the actors into as much closeness of the reality as possible. At least in a way that we could do it, that was still safe.”

Part of the idea for making Dunkirk was planted in Nolan’s mind when he made a crossing of the channel himself. “I made the crossing with Emma (Thomas – the producer of Dunkirk) and a friend of mine who owned a small boat,” he explains. “We made the crossing to Dunkirk at about the same time of year that the evacuation had taken place and it was far more difficult than any of us had expected. The channel really did not co-operate, the seas were very rough, and it took a very long time – something like nineteen hours – for us to get over there. So the difficulty and the fear of that without people dropping bombs on us, and the feat of that without there being a war zone at the end of the journey, that experience really cemented to me an admiration for the people that took part in the real evacuation. That really was the driving force behind why I wanted to make this film.”

During the filming of Dunkirk, there were leaked reports of weather creating havoc for the crew while they filmed at Dunkirk and Nolan was only too happy to tell us all about that. “Filming at the actual location seemed like the best way to get close to the truth,” Nolan says. “When you walk that beach, we walked it a lot; you feel the history there. We had to rebuild huge sections of The Mole, which is this big structure that spans out into the sea. There were men essentially trapped on it, and that re-creation of history poses a lot of logistical challenges but ultimately to be able to re-stage these events with historical accuracy felt like an important part of what we were trying to do and gave us a good basis to the making of the film.”