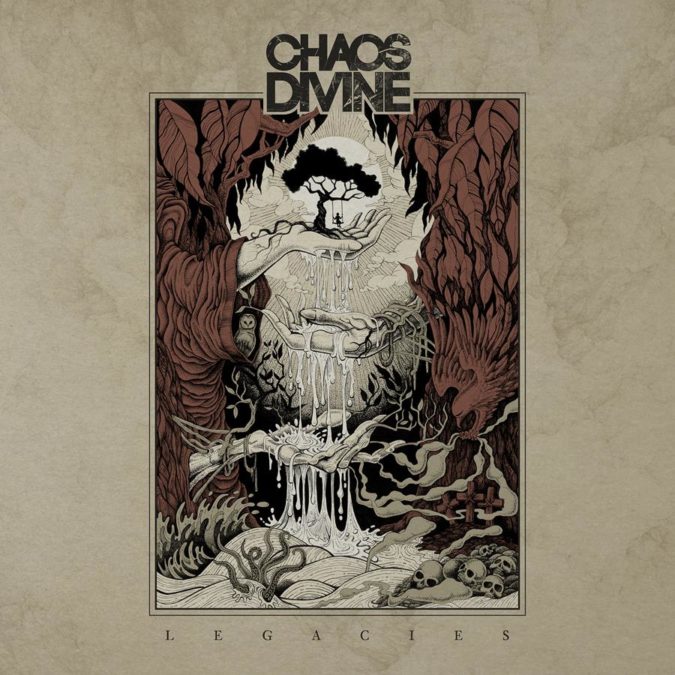 Chaos Divine have delivered one of the best progressive metal albums of the year with Legacies.

A collection of 13 songs spanning around the one hour mark, Legacies is more than the sum of its parts in that listening to the album provides that rare experience where you can get lost solely in the music.

There is an underlying flow to the album that gives added spice to the chaotic nature that magnifies its sound.

Utilising elements of straight out heavy metal infused with progressive and melodic rock Chaos Divine manage to capture the perfect balance of harmony and destruction with vocalist Dave Anderton at times soaring majestically while at others decimating your eardrums with lashings of harsher vocals that punctuate proceedings.

From the outset with opening track “Instincts,” Chaos Divine make no apologies for their musical influences, channelling the best parts of bands like Cog and The Butterfly Effect with enough individuality to stand alone on their own merits.

“Instincts” begins with a stuttering guitar riff that perfectly sets the tone for the eclectic nature of the music to follow before settling into a pulsating rock number that perfectly showcases Anderton’s vocal range and capabilities.

“No Saviour” ramps things up a notch with an eclectic intro that paves the way for all that is good about Chaos Divine.

The music is at times hauntingly beautiful while at others crushingly destructive but at no time feels forced or laboured despite the contrasting vocal delivery.

The dual guitars of Ryan Felton and Simon Mitchell are prominent throughout Legacies, providing a haphazard yet flowing component that accentuates without dominating.

“Unspoken” showcases Anderton’s soaring vocals and precision in one of the albums standout tracks while “Colours of War” almost paints a musical picture to match the name.

“False Flags”, with its ‘attack’ battle cry to start proceedings is perhaps the albums best song but it is difficult to separate one from the other with each offering its own musical statement from a band who sound and feel like they are ready to break free from the local market to stamp their authority on a global scale.

It’s been five years since last album Colliding Skies but that time frame seems trivial when you compare it to the quality of both the music and the lyrics almost pouring out of Legacies.

Chaos Divine are quite possibly one of the best bands you have never heard of but if there is any justice in this world that will soon change dramatically. Legacies is a superb album delivered in an uncertain time that almost single-handedly brings hope to the future of this great industry that we are all part of.