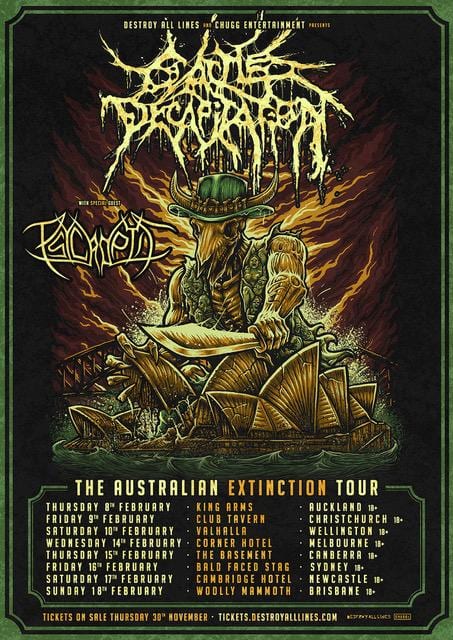 One of the most brutal, relentless and vital forces in extreme music, Cattle Decapitation will return to Australia in February!
They will be joined by one of Australia’s most successful heavy acts, Psycroptic, to form one of the deadliest tours of the year.
Over the course of twenty years and eight full-lengths San Diego’s Cattle Decapitation have more than proven themselves in the international metal scene and with their current album The Anthropocene Extinction (Metal Blade) they have delivered a volatile, apocalyptic beast that is as hideous as it is compelling.
To get sense of just how unrelenting Cattle Decapitation are on stage, watch this video, shot by Obscenery Films from their recent European tour for the track The Prophets Of Loss.

Delivering repeated sledgehammer blows at breakneck speed enables the band to maintain their position at the most violent end of the death metal spectrum yet their most recent offerings have expanded their sound, allowing a little more melody in without losing any of their intensity. The brutality is underpinned by vocalist Travis Ryan’s bleak lyrics that bluntly illustrate the fate of the human race if it’s allowed to continue pillaging and destroying the planet.
Cattle Decapitation are the soundtrack to savagery. A striking, unflinching reflection of the current state of humanity.
Psycroptic have become an unparalleled act in an enigmatic world wide movement commonly known as death metal. Since their formation in 1999, the band having released six critically acclaimed studio albums, all which show an organic progression along a clandestine path from which they will never stray. More technical and brutally intuitive than ever, Australia’s finest extreme band have truly mastered their craft.
Psycroptic have toured all corners of the globe with names that need no introduction to those in the know – Cannibal Corpse, Suicide Silence, Decapitated, The Faceless, Obituary, Carcass, Nile, The Black Dahlia Murder, Origin, Kataklysm, Aborted, Despised Icon, Suffocation, Veil of Maya, Cryptopsy, Misery Index, Vader, Born of Osiris, Hate Eternal you get the picture right?
Cattle Decapitation and Psycroptic. A match made in hell for an evening of the utmost brutality.
Sounds like fun!
TOUR DATES
Thursday, February 8: Kings Arms, Auckland NZ*
Friday, February 9: Club Tavern, Christchurch NZ*
Saturday, February 10: Valhalla, Wellington NZ*
Wednesday, February 14: Corner Hotel, Melbourne
Thursday, February 15: The Basement, Canberra
Friday, February 16: Bald Faced Stag, Sydney
Saturday, February 17: Cambridge Hotel, Newcastle
Sunday, February 18: Woolly Mammoth, Brisbane
*Cattle Decapitation only
On sale Thursday, Nov 30 @ 9.00am
tickets.destroyalllines.com
Offical Event Page:
https://bitly.com/CDE18FB
www.facebook.com/DestroyAllLines
www.facebook.com/cattledecapitation
www.facebook.com/psycroptic
The Anthropocene Extinction is out nownervegas.com.au/cattledecapitation
Psycroptic is out now
nervegas.com.au/psycroptic

SUFFOCATION Livin’ It Up In North America

The Resurgence Of MASSACRE