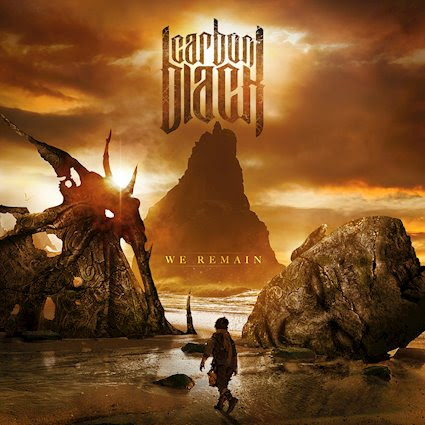 Four mates from Illawarra came together with a mutual love of groove metal almost ten years ago, and since then they’ve set out to build one impressive CV. After a couple of critically acclaimed releases and sharing the stage with such big names as Hellyeah and Max & Iggor Cavalera, Carbon Black have made their way through the devastating times of the last few years not only unscathed but inspired with their latest offering, the aptly titled, We Remain.

Recorded in pieces throughout the last two years, We Remain is a tour de force of the band’s personal reflections during several treacherous events, including bushfires and the pandemic. They’ve also incorporated some true professionals behind the scenes with recording sessions engineered and produced by ARIA-nominated Lachlan Mitchell (The Jezabels), Grammy winner Alan Douches (Mastodon, Cannibal Corpse) overseeing mastering from his New York studio and the album being mixed by the legendary Kevin ‘Caveman’ Shirley (Iron Maiden, Silverchair, Dream Theater) whilst in lockdown in his studio in Sydney.

In a time when most spouted “we’re all in this together” Carbon Black truly understood the assignment with this monstrous effort.

Alas, monstrous is an understatement in this case, as the boys produce such a big sound that made this Pantera fan from way back overcome with nostalgia. A thick, juicy bassline starts things off with opener Red Flag before the thrash of guitars and crash of drums come in with the force of pure angst. The quality of speed and accuracy is on full display and is tied together by the multifaceted and charismatic vocals of Jonathan Hurley with the spellbinding power to enthuse and ingest the audience with a healthy level of anger and rage.
A few strong growls introduce The One Who Knows My Name and continues to emulate the suave spirit of Phillip Anselmo. The bouncy rhythms and the melodic ‘wah’ of guitar make this one of the catchiest
tracks on the album.

Brothers Rob and Steve Giles’ rhythm section accentuate Scars with the latter’s drumwork standing out with a thumping double kick throughout, lifting the song’s thunderous tempo as the listener can’t help but scream along “there will be scars”.

Under Order laments the villains of the last few years in the unapologetic leaders of the world. Featuring Tim ‘Ripper’ Owens (Judas Priest, Iced Earth) who shares duties on vocals and the way they go line for line during the verses to come together with golden harmonies for the chorus is truly masterful.

The funky cowbell-laden We Bleed screams the sorrow of the world’s citizens as we are constantly made to play the pawn while One Enemy fires through with a roaring machine-gun rhythm as the vocals are perfectly executed to keep up with the track’s ferocity.

Our Reprise ends the album with a sentiment to the aftermath of our countries’ harsh bushfires. The bluesy-like guitar riffs teased with some voicebox compliment the lyrics if facing the inevitable rebuild post the disasters. The inevitable disappointment with the lack of empathy and compassion from our PM is met by commentary of the forced surrender through lyrics such as “in clouds of smoke our dreams will choke and die” and “our reprise will be”, as well as the plea to “show your true self”. The song ends the album in tremendous fashion, one that cements We Remain as nothing but an overwhelmingly impressive triumph.

Carbon Black certainly proves they can succeed in writing classic groove metal and transcend in producing high-quality music. The compositions are fuelled by such an exciting rhythm section whose thumping drums and solid intricate basslines are consistent throughout the album and allow guitarist
Damon Bishop to excel with well-crafted riffs and phenomenal solos that impeccably squeal and shred in each and every song. It’s been one of the most fulfilling albums I’ve heard in a while from go to whoa and I cannot wait to see these songs played live sometime soon.