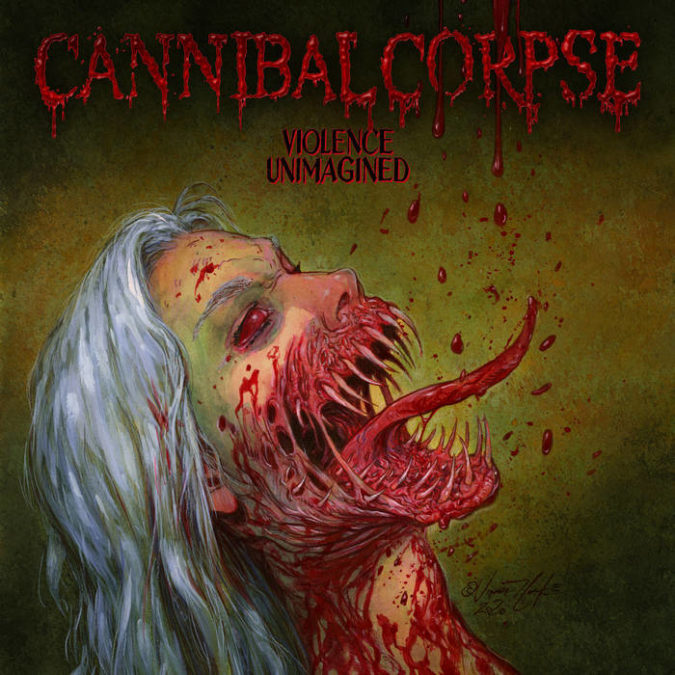 It took the MIGHTY Cannibal Corpse a mere two and a bit years to construct their latest murderous rampage disguised as pure death metal magnificence. Album number fifteen for these metal icons is as Corpse as Corpse get: Of course it’s called Violence Unimagined!

In over thirty years they have never strayed from their path of annihilation and devotion to audio sensory armageddon.

What allows this album to differ from their past few releases and is quite obvious to those connoisseurs of the band and the death genre as a whole, is that Cannibal Corpse have reigned in the frequency of blast beats and allowed the album to breathe as opposed to pure forceful bludgeoning from start to finish making the Corpse as an entity, stand out in 2021. Their previous album Red Before Black was a consistently pummeling affair but this time around the band have chosen to allow the blast to become a highlight in songs with most tracks on the album being framed by solidifying grooves that insist our attention is murderously grasped.

Bassist and original band member Alex (Webster) himself said in a recent interview conducted with yours truly for HEAVY (coming in a few weeks) that they wanted their new songs and, ultimately, Violence Unimagined to be a more interesting and different beast whilst still maintaining the familiar, honest and consistent Cannibal Corpse signature sound.

They absolutely never disappoint, and in saying that, very few bands have the longevity and consistency that Cannibal Corpse possess. Although the band have, throughout their incredible career, seen members come and go, their passion to remain pure and honest to their original mission statement is as pure today as it was in their inception. Clearly, it’s something in the Florida waters that make it so!

Album opener and current video released – “Murderous Rampage” is pure, unfiltered and pristine Corpse. Chaos at maximum BPM’s from the outset, we are greeted with CLASSIC platinum Cannibal. “Murderous Rampage” is like the handshake from an old friend that we have dying to receive for the past fifteen months but haven’t been able thanks to fucking social distancing.

“Necrogenic Resurrection” is also a reflection of the band of old. Straight up death metal with no contamination. Here we can feel and hear the band in amazing form and 2020’s chaos in no way interfered with their creativity.

Collectively the longevity of Paul, Alex, Rob, Erik and the “Corpsegrinder” is a testament and reward of how their creativity and importance in the metal world has enabled them to stand out, remaining rulers of their kingdom. Saying that track three on the album and first official video is “Inhumane Harvest”, the video (think of a slightly tamed version of Hostel!) portrays the topic of the illegal human organ trade and is quite glorifyingly gross. Opening quickly at maximum velocity then delving just as suddenly into killer groove with slick production, George Fisher at his guttural finest and the other Corpse lads shine as one in a malevolent unifying force. “Inhumane Harvest” is all those best bits of Cannibal Corpse rolled into one magic album highlight.

“Condemnation Contagion” is the album’s silent nod to the covid pandemic and a solid slab of angry chaos referencing the 2020 shit show we are still sifting through the remnants of, even now, a quarter of the way through 2021. Following on from “Condemnation…” is one of the highlights of the album, the Webster penned – “Surround, Kill, Devour”. Here is an absolutely crushing fucking track that proves Cannibal Corpse have always meant business in their approach to remaining relevant in their songwriting. Pummeling intro with a groove that will get the windmill moving, slowly building to a crushing chorus with Fisher screaming blood-curdling orders at the ever faithful horde. Halfway in there is this short punishing prog/death riff similar to (ex-CC guitarist) Pat O’brien’s / Jeff Loomis’ guitar style and sound from Nevermore. It’s a $30 riff without question and adds more colour and life to the song as if it even needed it – leading into another perfect death riff from the gods follows. I’m telling you all that “Surround, Kill, Devour” is alone the reason to buy the album even though you haven’t heard it yet so get your hard earned ready.

In his own words, Alex Webster states during our interview that halfway through Violence Unimagined, the song “Ritual Annihilation” features some of drummer Paul Mazurkiewicz’ fastest playing throughout their fifteen album career. Start to finish “Ritual Annihilation” is a blisteringly paced pummeling force that leaves little rest for those limbs and necks that need relief. Whilst it is a shame that we aren’t going to be seeing the Corpse here until at least mid-twenty twenty-two, be rest assured that Violence Unimagined will be the audio brutal bliss that will keep us salivating until they can get back to our shores.