Australia’s foremost authority on progressive rock, Caligula’s Horse, are just weeks away from kicking off their Let It Grow tour which will celebrate their cult classic The Tide, The Thief & River’s End and breakout progressive masterpiece Bloom by playing them back to back!

To make these special evenings that much more unforgettable, Caligula’s Horse have just announced their support acts, who will performing exclusive unplugged sets.
In Brisbane, Hazel Mei, will deliver a set full of ambient flair and poetic lyrics that are enveloped in folk tinged progressive rock with a jazzy twist. Check out their music video for
Put That Bottle Down, directed by Caligula’s Horse guitarist, Adrian Goleby.

For Sydney and Melbourne something extraordinary and very exclusive has been arranged. Circles and Glass Ocean will perform in acoustic mode. No drums, no wall of sound, just acoustic guitars and vocals.

Sydney will be treated to a very intimate set from Glass Ocean’s lead vocalist Tobias Atkins and guitarist Nguyen Phambam. The band have earned a reputation as a must see live act with their modern take on late 90’s progressive pop laced with sensuality.

With raw vocals and guitars, the true power of their songwriting will be on display.

Nothing showcases a band’s real craftmanship than by playing their songs as raw as possible.

Caligula’s Horse frontman Jim Grey says of their special guests, “It’s definitely something different for us! We’re foregoing the traditional band lineup, and these three evenings celebrating River’s End and Bloom will be opened with some gentle acoustic sets. These artists are all good friends of ours, and their music translates beautifully into the acoustic world.”

Let It Grow will be the first headlining tour from Caligula’s Horse in a year. Last seen on Aussie stages as part of the epic line up led by Ne Obliviscaris in May, Caligula’s Horse spent all of October and most of November 2018 playing to their ever growing European fanbase

As with their previous tours, Let It Grow will feature a 60 minute guitar masterclass from
Sam Vallen and Adrian Goleby. These events will be jam packed with information and entertainment. Sam and Adrian will interview each other and go over their guitar techniques, approaches and rationale to songwriting, production tricks, their live touring experiences, and of course their extensive gear!

Its time for the band to play for their Australian fans once again before heading into the studio to record the follow up to their biggest album to date, In Contact.

Tickets on sale from 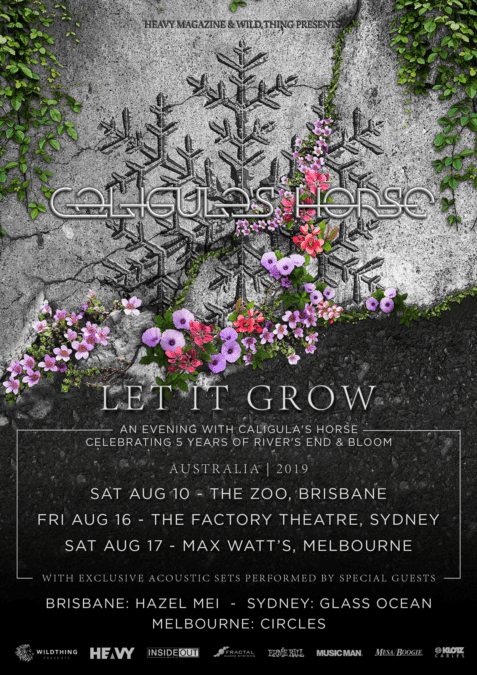